That’s right …it’s the Hubster’s birthday. Last year for his birthday we decided it was time to upgrade our 19″ TV to a modern flat screen 42″ TV. I’ll be honest…while we say it was a birthday gift, both of us decided that we could no longer read the info guide on the screen without putting on reading glasses. We have been glasses free while watching TV for a full year…better and cheaper than laser surgery.

This year he insisted on no gifts (for him)…actually I just assumed this when he said, “Your presence is enough for me.”

I couldn’t just let his birthday go unnoticed so I will pay tribute to him here.

Let’s start at the very beginning…

never mind this is a PG-rated blog so I will spare you the details from what I am assuming would have been a special event sometime around Christmas, 1959.

Thanks to lack of photos and modern technology we jump forward about 21 months to late 1961.

Hubster, …standing with his mother holding his brother, his New Hampshire grandmother looks on from the car. 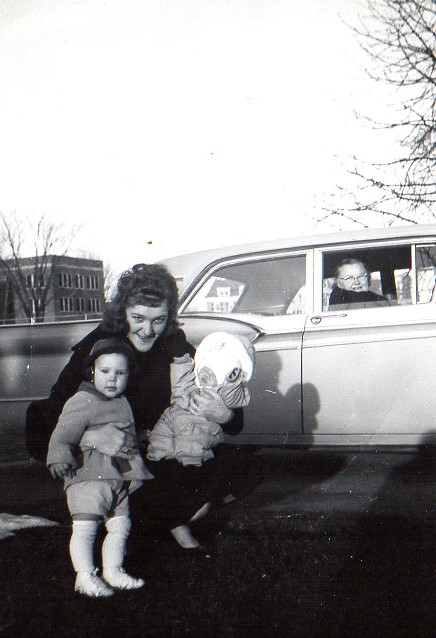 Nice socks…today he prefers an extremely low-cut sock for athletic footwear and a more traditional ankle length for dress and casual shoes. He has also been known to go sans socks.

Hubster was born in Baltimore, but grew up in New Hampshire.

Easter on his grandparents driveway…Hubster is 2nd from the right with brother (matching jacket), sister (bonnet style hat, bows on shoes) and cousins. 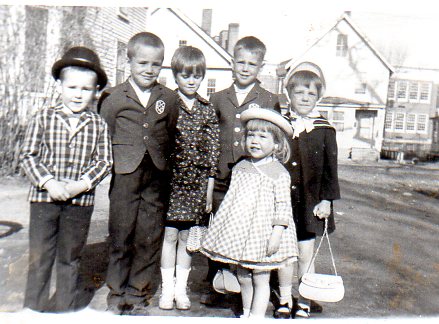 There was not a lot of money, but they look like a million bucks.

I see the both of the Son-sters smiles in this photo…love the zipper sweater. 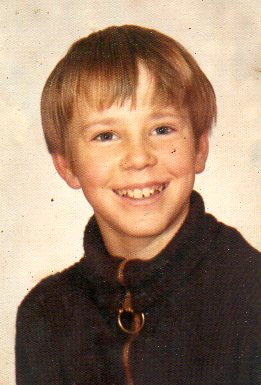 Unfortunate run-in with brother and a bunk bed caused the chipped tooth…has long since been repaired. 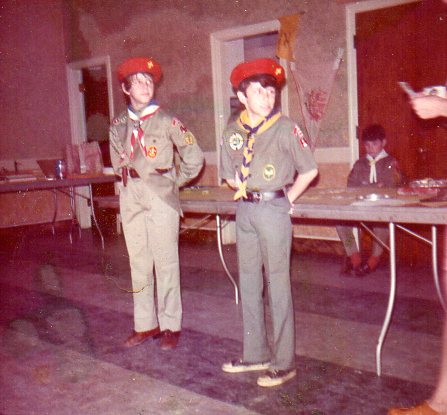 He wears neither a sash or beret today…although he does own several pair of khaki pants and loafer style brown shoes…some things are classic.

For several summers in a row we vacationed at my brother’s home on Lake Winnipesaukee in Laconia, NH. Hubster often spoke of sailing and hiking in the nearby mountains.

“Look kids Mount Major…I used to hike to the top every summer.”

Word of caution: When travelling to the mountain regions of New Hampshire with the Hubster pack proper footwear. Climbing Mount Major in Keds is neither fun nor safe. File this under: what I did for love.

Glory days on the lake…I do not know what is in his hand, but it looks like a boomerang. Also not sure if that is Mount Major in the background, but I still shudder.

Hubster was and is ever the Patriot…don’t know the woman, but Hubster is sporting his Sons of American Legion hat. 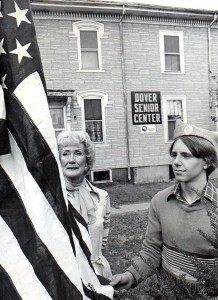 Guessing this is a Memorial Day or Flag Day event.

Hubster’s Uncle Denny* taught him how to fish…

Hubster graduated from high school in New Hampshire. He came to Baltimore to attend college and live with his Dad.

Hubster and I met four days into my freshman year of college. Peggy Anne (my college roommate) peeled me off my text books and insisted I go to a dance at a nearby college on a Thursday night. Dean’s List was so overrated.

Our hair color seems to blend with the woodwork in my dorm room. 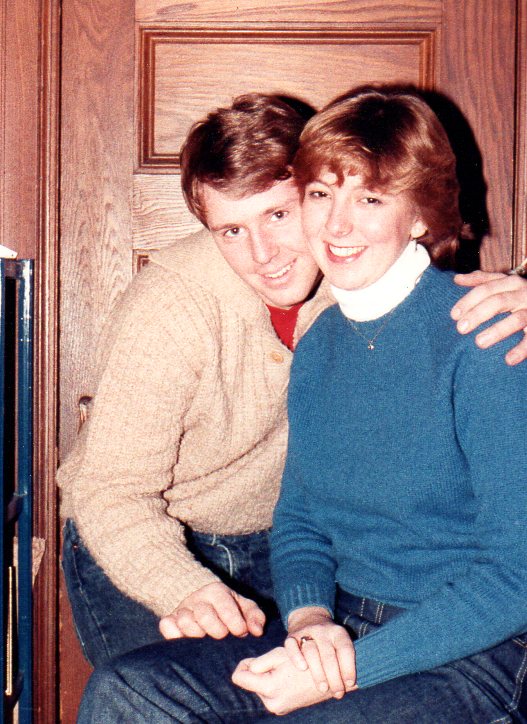 In our very preppy days…and me with my Princess Diana haircut.

Long before the “selfie” via the cell phone…Hubster (boyfriend at the time) would take photos of himself using my Polaroid camera . This one in my dorm room. 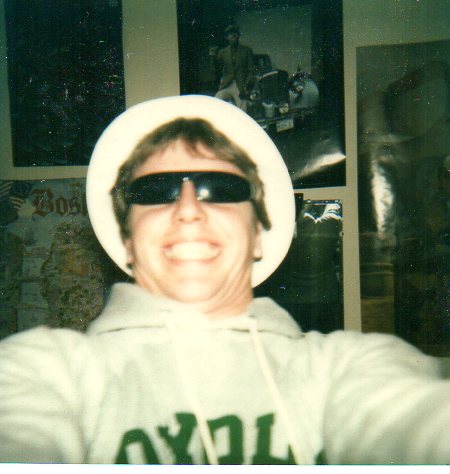 I think the sunglasses belonged to Peggy Anne.

In typical 1980’s photography …Hubster pretends to make a mad dash just before our wedding ceremony. Having recently become a Catholic perhaps seeing the back of the church had him a bit skittish. I didn’t see this photo set up as I was out in a limo in front of church, but my Monsignor uncle who officiated the wedding and was standing nearby would have taken him down in an instant so I wasn’t too worried.

Hubster looks adorable in this photo.

Hubster does not look old enough to be a Dad, but 2 1/2 years after our wedding and three hours of pushing finally brought forth Son-ster #1. 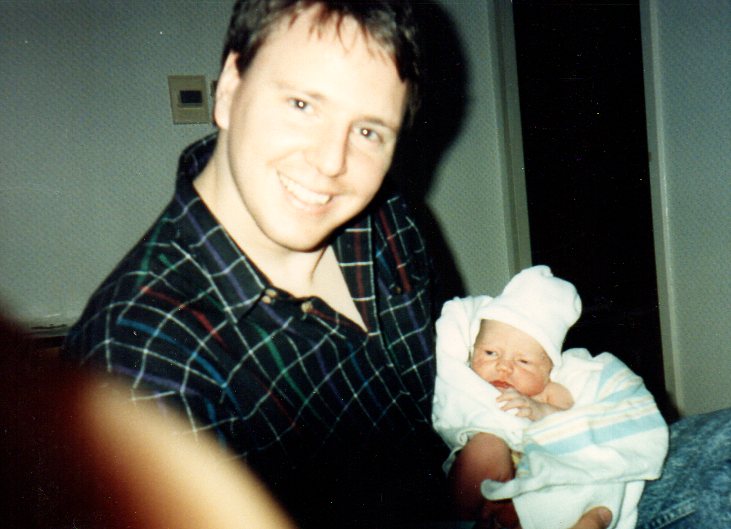 The wee hours of a late December morning…my finger in the photo…did I mention three solid hours of pushing?

Hubster’s mom came to visit for her #1 son’s birthday 1993…she is no longer living…she was quite a character. 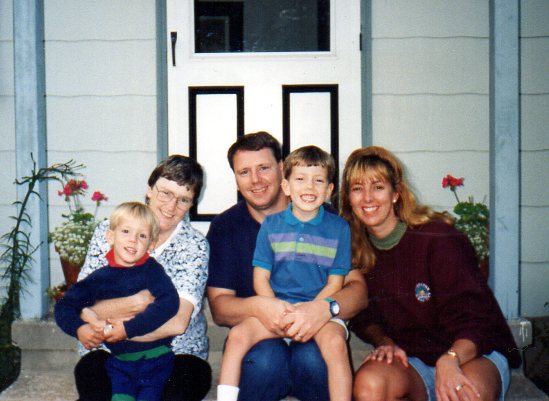 He has always been a great Dad and son for his family.

Hubster loves his kayaks…he doesn’t get out there as often as he would like…hello, Son-sters…gift idea…spend a day kayaking with your Dad…relatively inexpensive as it only requires your time…just sayin’.

We are on the road toward empty nest… circa 2007 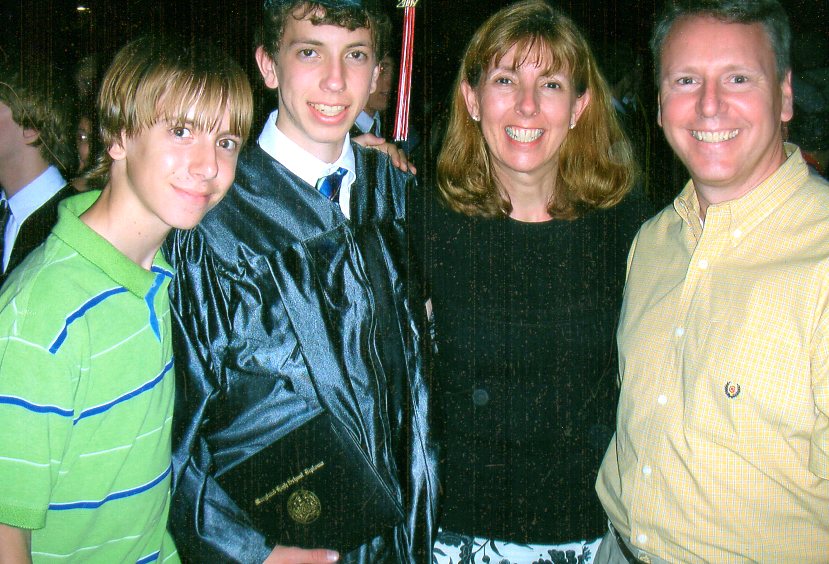 Son-ster #1 HS graduation…I do not look good in any of the later graduation photos and since this is my blog I am choosing this photo. Son-ster #2 is 6’1″ now…oh how they have grown and since flown.

Thanks for putting up with my family…you know they love you too! 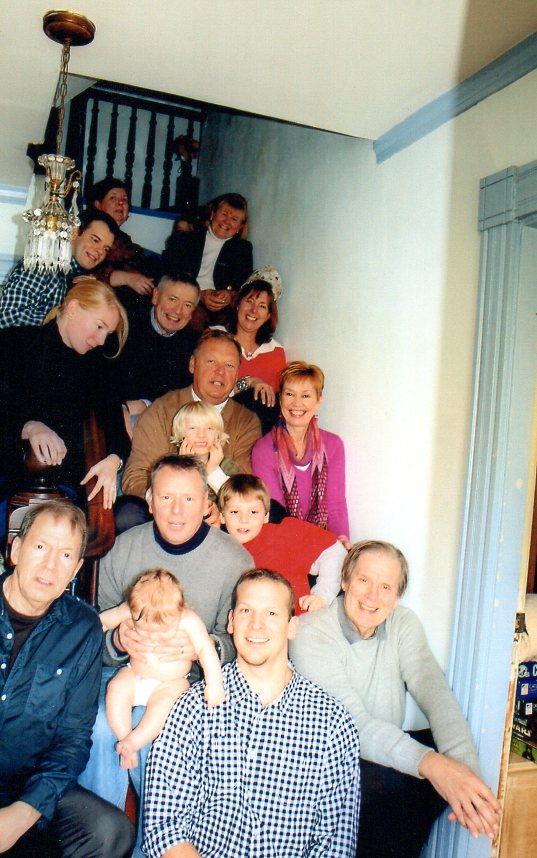 Hubster holding the baby…nervous that he might be saddled with changing that diaper. My 50th Birthday at my sister, Keary’s house. It took seven or eight takes to get this photo…20 family members are not present, but don’t worry you were excused…not to mention there was no more room on the steps.

I hope you’re enjoying your gift…me writing about you…I am looking forward to many more years of birthdays together.

Love your child bride and reason for being,