Saturday was a rainy day here in the central Maryland region. I took advantage of most of the day  looking at new curriculum and planning for future lessons. It was quite time-consuming and I still need to go back and read it again.

Later, the Hubster and I enjoyed some delicious steamed crabs in the sunroom and then, being the wild socialites that we are, we watched a couple of movies on Netflix. I think I fell asleep during one and honestly don’t remember the other. We prove to be quite the entertaining couple. At about 9 pm we looked at each other with sleepy eyes and decided it was time to hit the hay. 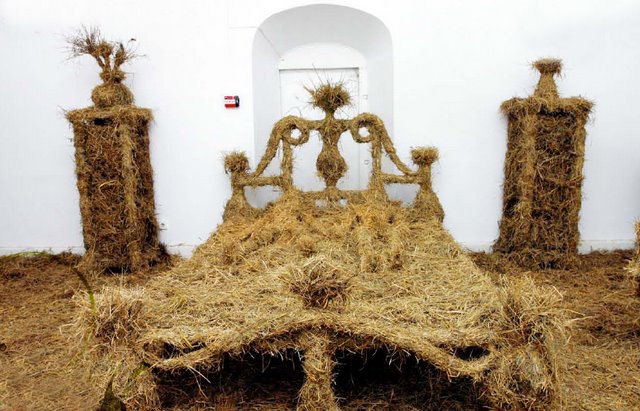 Just as I turned off the lights the bombs bursting in air began from the fireworks of the Star-Spangled 200th Celebration in Baltimore city. We are approximately 16 miles north of the location where the fireworks were being displayed above the inner harbor, but behind our 1960’s ramparts; it sounded much closer. So there was no rest for the weary until the rockets red glare had come to an end. Hubster texted Son-ster#1 while we were laying in bed to find out if he was enjoying the fireworks. Both of us nearly fell out of bed when he returned the text, and replied that indeed he was enjoying a wonderful view, probably from his rooftop deck in his trendy neighborhood. It was not so much the shock of him watching the fireworks that nearly caused the fatal fall; it was the fact that he returned the text. Communication …from a grown son, go figure….maturity is a wonderful thing.

Hmm, and if the fireworks were as nice as this then an invitation to join him would have been welcomed, but don’t worry about us we’ll be fine.

On Sunday morning, by the dawn’s early light, we dragged ourselves out of bed and drove down to the city to check out some of the Tall Ships that came to Baltimore this week for the event. We wanted to find a decent parking place and hopefully enjoy smaller crowds. As we rounded the corner to park a sign in front stated, “EVENT PARKING $30”. We know we don’t live in the land of the free… parking; and it is not like we have never paid for parking before, but for some reason this just seemed astronomical. We opted for a smaller lot on the other side of the harbor. Honestly, the car had a better view in the $18 parking space.

Oh say, can you see what I mean? 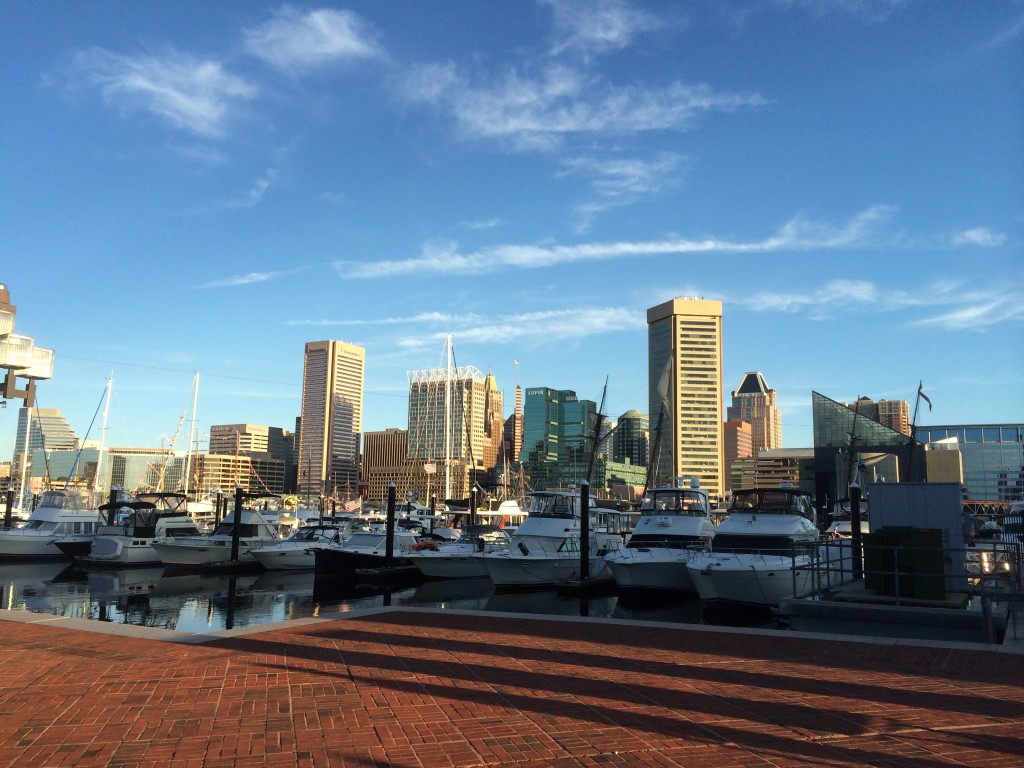 We began our walk around the inner harbor and that was when I realized I left my phone, and thus my camera at the home of the brave. Translation: plugged in and gallantly charging on the desk by the foyer…..Really? (This is what I said to myself instead of cursing…trust me, I thought about the cursing, but Sunday, no Mass…you can’t be too careful.)

I looked at Hubster and he looked at his phone and because I needed proof  of the day he handed it over to me. Now as mentioned in previous posts, I am his “child bride and reason for being,” but since this was his phone and we were so close to water he was a little leery of multi-task mission to walk, hold phone, take photos and people watch without dropping it in the drink. It seems that he has forgotten the reason for this Star Spangled 200th Celebration. If Francis Scott Key was able to make his way onto a ship, during a bombardment, bring quill and ink, and write four verses worth of lyrics to eventually be sung to a British drinking song that would become our nation’s anthem then…..I believe you will see that I  can proudly hail my way through the perilous  day of sightseeing and still manage to return his phone in ship-shape.

Here is my morning of a Star Spangled Sail-abration and more….

This one was heading out for an early morning cruise and re-enactment. 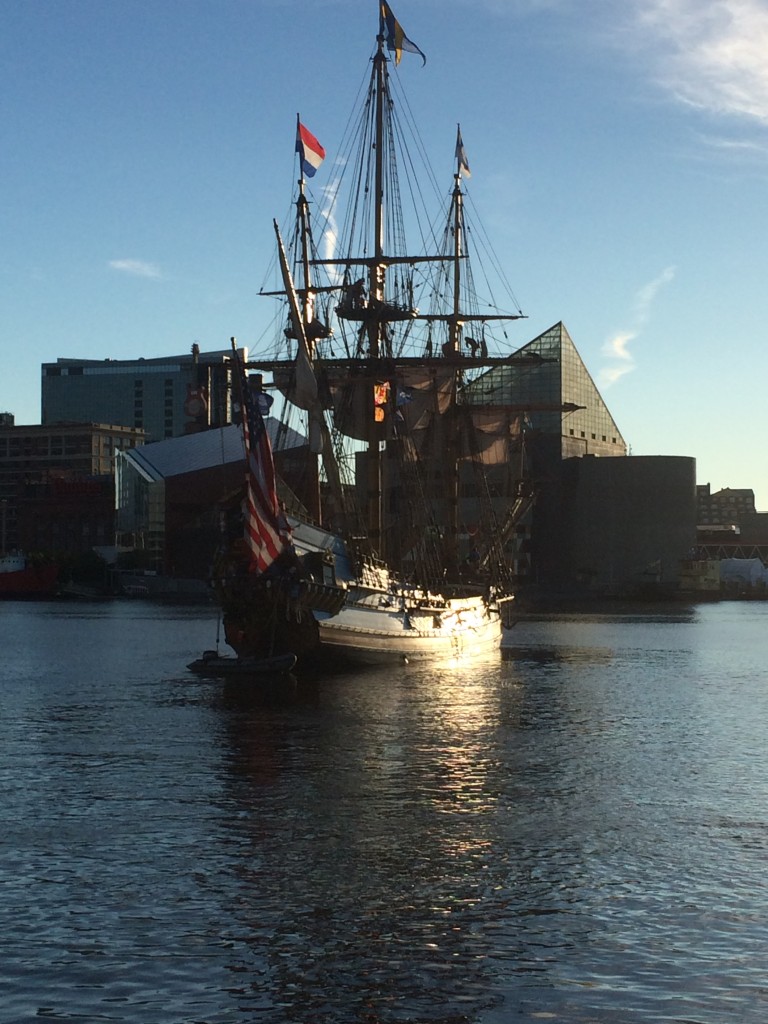 If you’re not a local, the triangular building in the background is our National Aquarium.

The Constellation: One of the six original frigates of the US Navy …a “sister-ship” to the USS Constitution in Boston.

This ship docks at the inner harbor year round.

Not the best photo, but a tent company was taking down a huge circus tent right next to it…I didn’t want that in the photo.

Many have left small flags and flowers.

The National Aquarium is right next to the World Trade Center…I love the play on words. 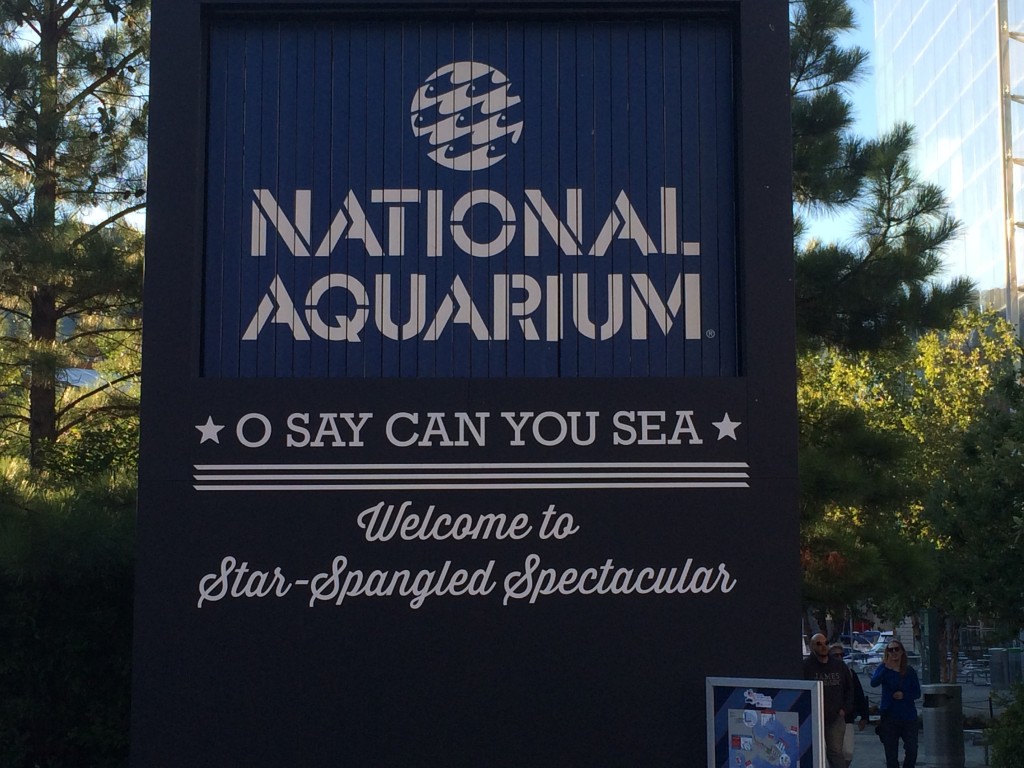 The USS Choctaw County…...there was an armed, camouflaged-clad, military man keeping watch over this ominous vessel. 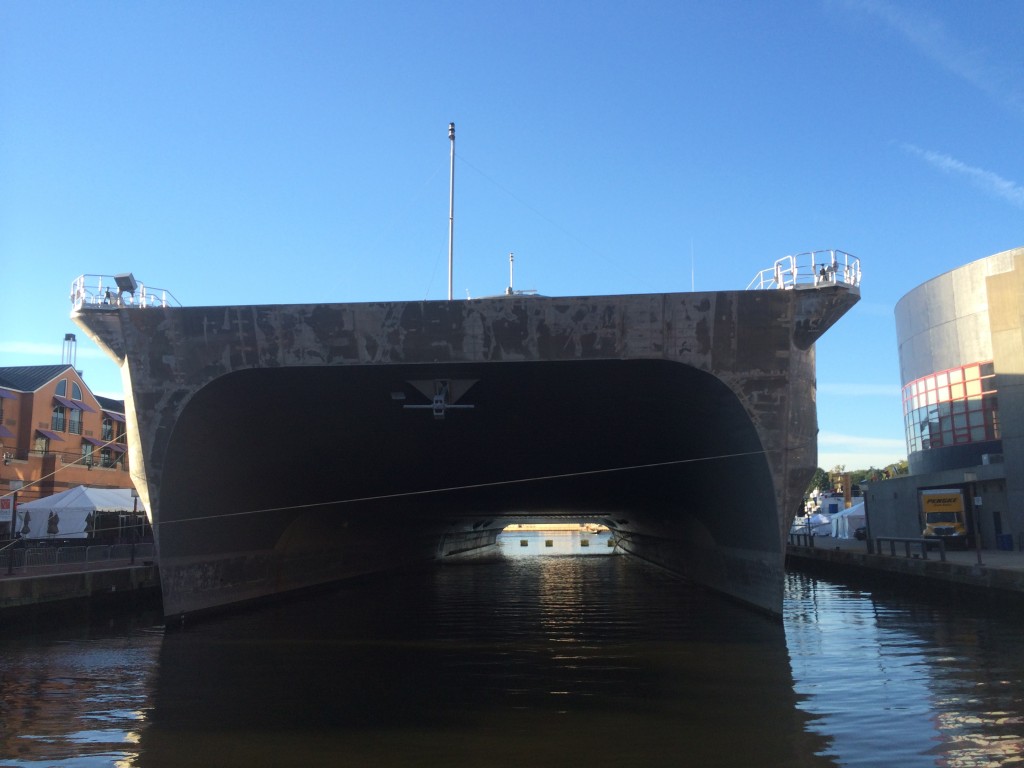 I don’t know whether this is the bow or the stern, although you must be impressed that I know the names of front and back…thanks Google for the refresher. 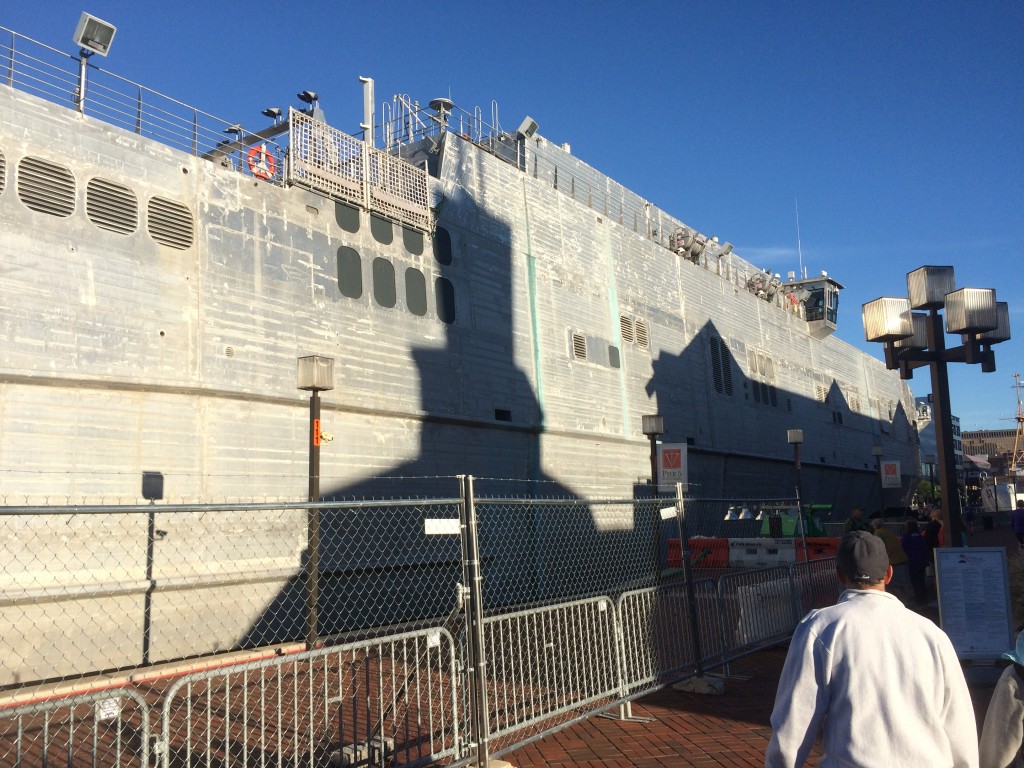 Side view…don’t know which…port or starboard…however I can tell that it is big and shiny.

There were two identical naval vessels parked stern to stern..didn’t get the names, but heavily guarded. Hubster making broad strides and bright moves  to get out of the photo. 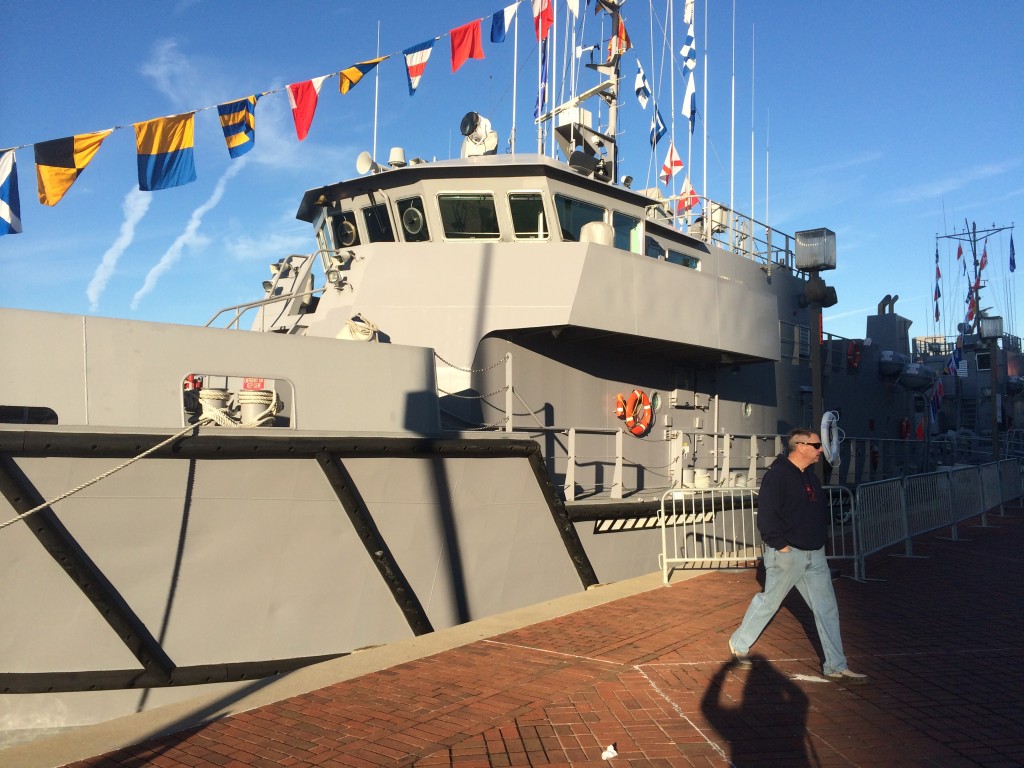 In case you are wondering the shadow is me…sunlight casts twenty pounds on a girl’s figure.

Seven Foot Knoll Lighthouse: once proudly hailed at the confluence of the Chesapeake Bay and Patapsco River…now lovingly restored and keeping post at the twilight’s last gleaming and throughout the rest of the day on pier 5. 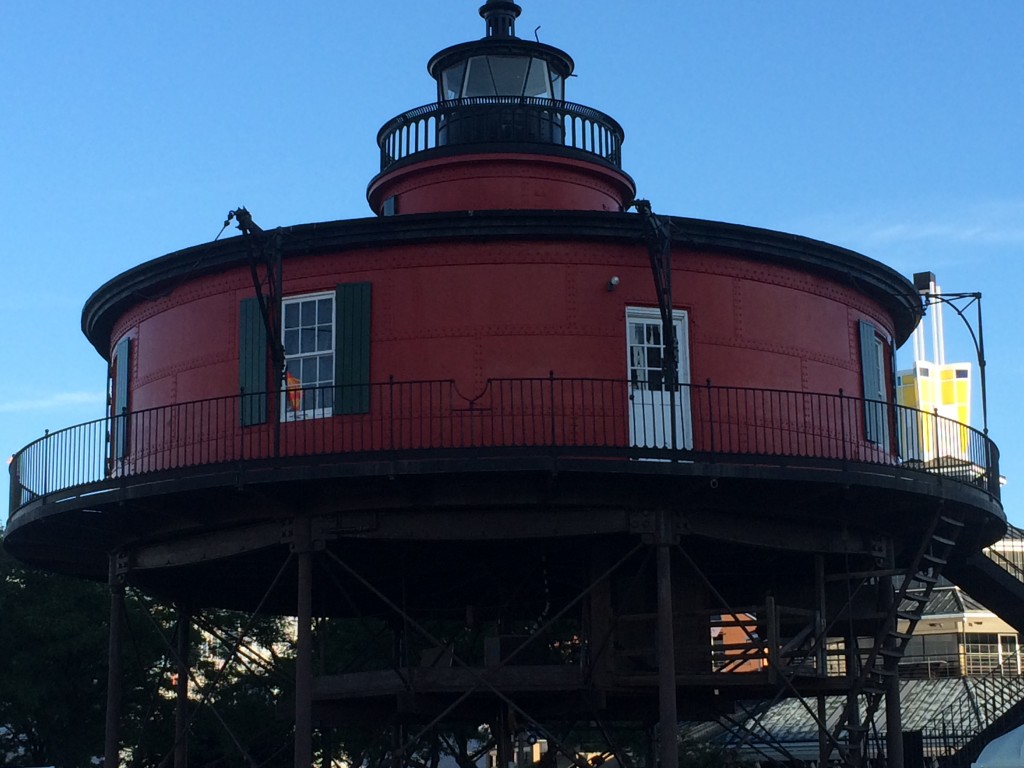 The flowering pots were too beautiful not to notice amongst the majesty of our freedom to roam about the city. 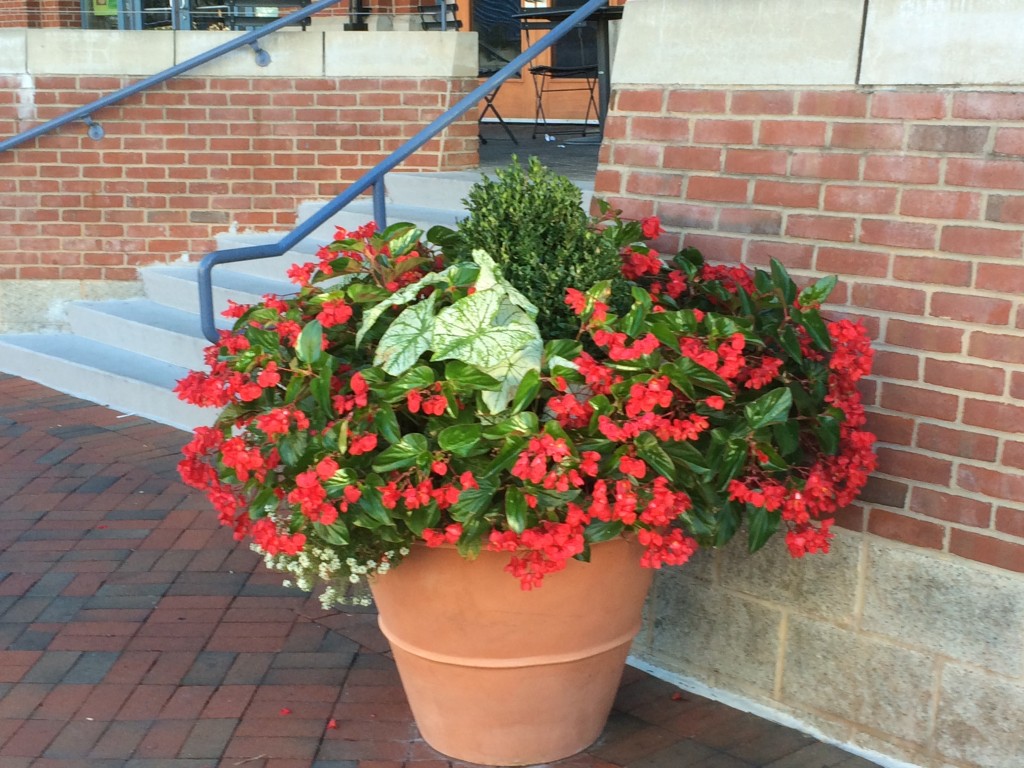 And to think I thought my flowering pots were a sight to behold.

A road race was also getting ready to begin in the dawn’s early light….Mercy Foot & Ankle Run to Remember 5K and 1 Mile Walk

…now that is my kind of group if I were to ever start running. 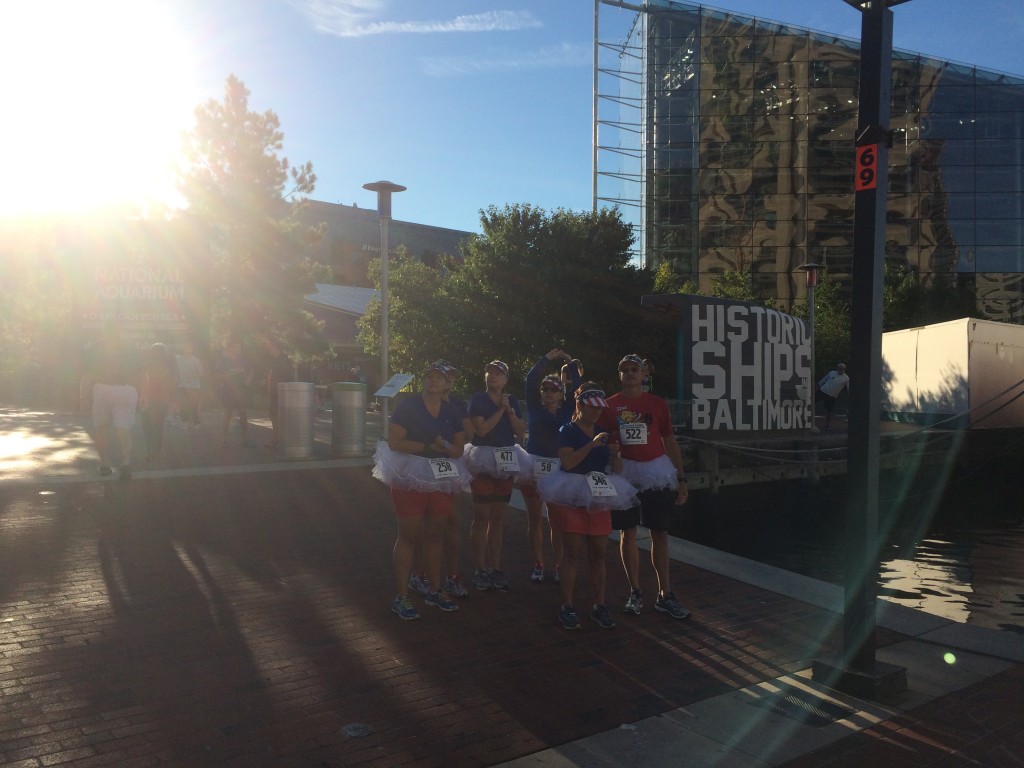 One of these individuals is a man…oh say does his tutu yet wave.

As we came back around the harbor I noticed this ship and had a sense of déjà vu…. El Galeon...I saw this ship sail across the horizon as I sat on the beach in Ocean City this summer. 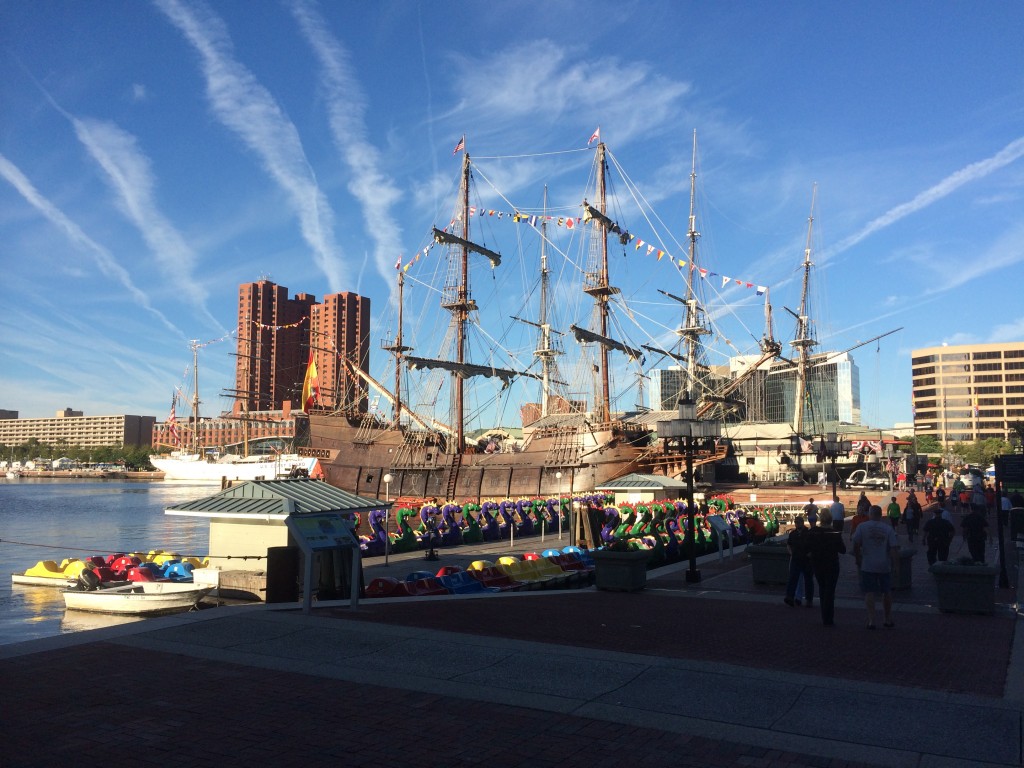 Since the 5k race was heading toward Fort McHenry, we decided not to go see the flag that was still there…instead we looked up to Federal Hill and enjoyed our Grand Ole’ Flag from the promenade. I know a different song, but nonetheless patriotic.

From here, we walked into Son-ster #1’s neighborhood for a bagel sandwich and beverage. We figured he would be at church so we didn’t want to disturb his Sunday routine by calling him. Here is a photo or two…not that we were stalking just touring the lovely historical homes.

Not his house…but a cute one.

Not looking down his street, but nearby…it was right across from the only bagel place open…I loved that there were no cars on this street. 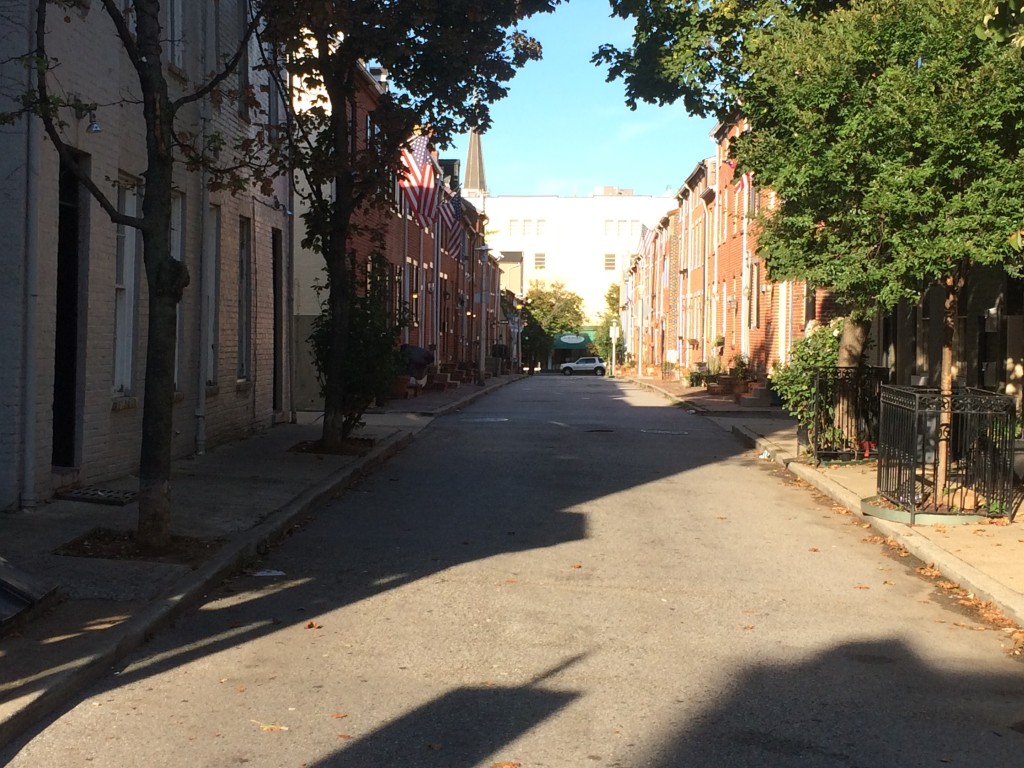 After this photo I returned the phone to Hubster. In the fourth verse of the Star Spangled Banner Francis Scott Key penned  “In God we Trust”. While I am not a clumsy person I was glad Hubster put his trust in me. Phones and marital bliss are expensive.