For the last several months my sewing machine has sat idle. In an effort toward full disclosure, the table on which the sewing machine sits and the room itself has an air of 1900’s eclectic Victorian renaissance…simplified “sweatshop”.

This sweatshop below lets in more natural light than my sewing room. 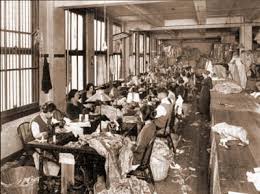 My love affair with fabric began as a very young child sitting at the foot of my mother’s sewing machine with her piles of scraps and me, attempting to make something out of the beautiful pieces for my dolls. After a long day which began with a predawn wake up the Milkman (my father) would return from delivering milk to find me sitting with the scraps even though my mother was not sewing. He would take a much-needed nap on their bed while I continued to play and talk to my dolls. Perhaps if he shushed me away I would not have the same affection for fabric and sewing as I do today. 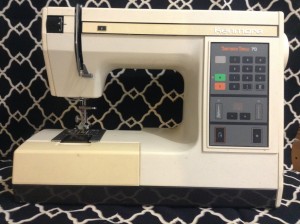 As a child bride, the Hubster and I were wandering the mall on a hot Saturday evening in late 1986, young love is so romantic. I spotted a sewing machine and was amazed at all the stitches it could sew without much effort. I was smitten and the Hubster knew he was not getting out of the store without the machine. I bought fabric and a few patterns and attempted to make some clothing. Fortunately, this was long before someone could say ala Project Runway, “Your out! Auf Wiedersehen.”  Instead I needed to face reality and myself in the mirror.

The sewing machine was placed in a closet for a long winters nap.

We bought our first home in 1988. According to the real estate agent it was the ugliest house on the block which made it the perfect price: cheap. Along with the house came our first baby, #1 Son-ster.  While we tried to transform the ugly house into a home our income was cut by 1/3 (can’t say half, the Hubster was the breadwinner) because I left my job in human resources in order to take care of my own humans.

Not Handy and Mandy, but trying to paint you a picture.

Our neighbors, like us, were a young couple; they had managed to renovate their home in a short time into something spectacular (unlike us). We were impressed. It seemed every time we went into their home a new update had been completed. *Handy (his name) and *Mandy (her name) had an unbelievable ability to refurbish and reproduce; they had three boys in 22 months (a set of twins to be fair).  We are still good friends today.

“Sew”, what happened next?  Well one day I entered the living room of their home and there adorning the windows were curtains, or more appropriately “window treatments” mounted in the heavens. Cue: the angelic choir and blinding light.

I was blown away and dismayed all in the same visit. I swooned for swags and jabots; quite honestly words I had never even used in a sentence. I grew up with curtains, plain and simple, hanging on a rod with maybe a tie-back, pom-pom or Swiss dot. As I coveted every inch of the stylish treatment and wanted to inquire about the cost, but knowing better, Mandy stated that if it were not for the interior designer cousin who gifted the treatments to them they would still have bare windows for the cost, which sent my young heart into spasm was quite prohibitive. Prohibitive was the only thing I heard after she told me the cost…I became immediately discouraged. I went home (crossed the street) and declared, “Our windows will be bare forever.” I may have even cried.

Wait one minute, I do not give up, .  And professed as Scarlett O’Hara did, “As God is my witness, I’ll never have bare windows again.”  I may have paraphrased her actual line. 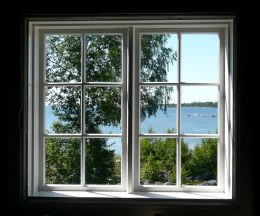 If only this had been the view.

Out from the depths of a spare room closet I rescued the sewing machine from banishment. Needless to say the rest is history. I cannot follow a pattern, oh yes I do buy patterns, but I am more of a visual, hands-on learner. Through some self-teaching, a subscription to Southern Living magazine and full inspection of every treatment hanging in every model home within a 20 mile radius of my home I created window treatments. Between the sewing machine and the staple gun, I was a Top Mount Queen five years running(this is a good thing, in case you were thinking otherwise). 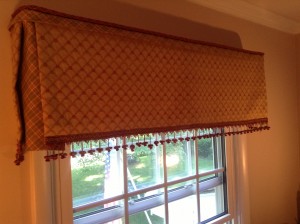 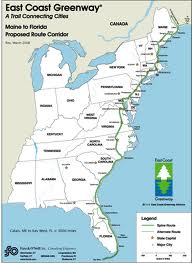 When we moved to our present home I was able to reuse a few of the treatments. Several fabric shops up and down the eastern seaboard (slight exaggeration: just Wilmington, NC to Boston, MA) became my second home. I was not at all embarrassed when the shop managers and I exchanged phone numbers or when those managers called worried about my well-being if I hadn’t been in the shop in a few days.

One day the gears on my machine started to change; because we ran out of windows and in the spirit of when life hands you lemons… I started sewing the next best thing that this girl loved…handbags. Here are a few of my favorites:

*Claudette: when you need to carry more than a tissue, lipstick and your phone 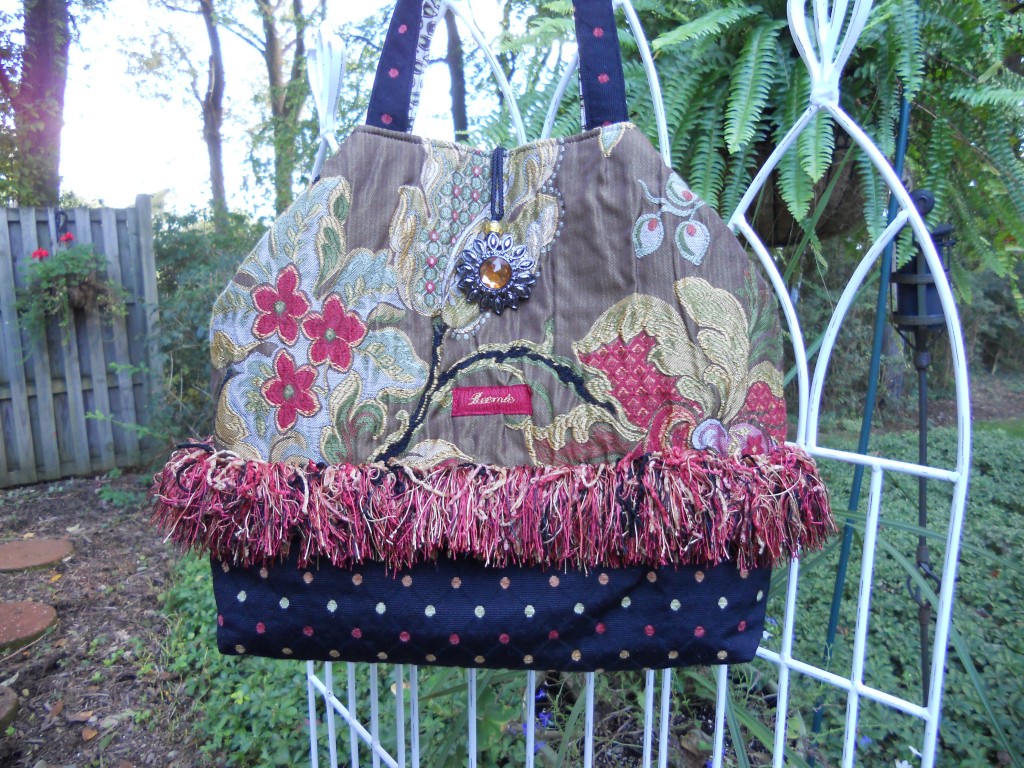 *Lucy: from night to day this girl can play 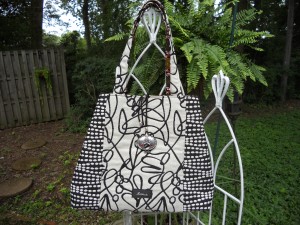 *Gabrielle: for pounding and hounding around the town 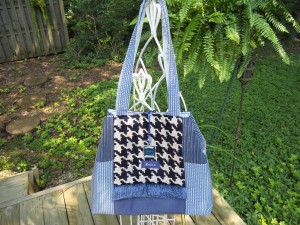 More than a few of you may be thinking, “Oh no she didn’t.”, but honestly, “Oh yes I did.” Over the years I have had many compliments although I know this is not everyone’s taste.  Lately, I haven’t been inspired which is why the sweatshop has taken a respite (also certain there are a few working code violations) .

I am well aware, the window treatments need updating. If you are not mathematically inclined here is a translation: updating = money. So for now I will sit, wine (not misspelled) and rest in the knowledge that no window in my house has been left undressed, and I will keep calm and carry on, if only with a handbag.

* Names were changed to protect the innocent.