One evening last week when I was leaving school after a  10 hour day. One of my team members had just returned from Chick-fil-A with a fried chicken sandwich and waffle fries. Honestly, as I was saying my good-byes I was tempted to walk right over and grab one of those waffles fries from her fingers and drag it through the special sauce she had sitting on her desk. I maintained my composure and she did not lose a digit thanks to my self-control. On the drive home I had chicken and fries on my mind.

I must admit as I look at this photo while writing and since I have just had dinner it doesn’t have the same appeal. 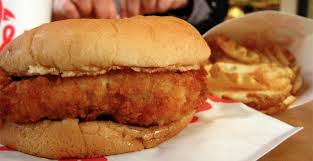 When I arrived home the Hubster had prepared salmon stuffed with lobster, a salad and grilled zucchini…the memory of the waffle fries quickly faded. The Hubster really knows how to woo his child bride.

Today, I came home from school (only an 8 hour day…like regular people) to find the Hubster once again working magic only this time chicken stuffed with lobster. Before you think…blah, blah, blah, what’s up with all the lobster? Well, a good friend gave us a freezer full a while back and we are finally nearing the end. Don’t feel too sorry for me, I never bore of lobster.

Not our actual lobster…I tried to keep our stash under wraps…we were robbed last year …word of  the bounty in the freezer could have made us a target. 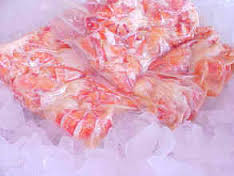 Anyway, the Hubster was not expecting me quite so soon…as a 10 hour plus day is more the norm during the school year.

Always being one to help (fingers crossed) I offered to make a salad. I opened the refrigerator and discovered that we had three ears of cooked corn left from the weekend. I could eat corn every day when it is in season so I decided I wanted a corn salad. Now who knows maybe I have seen this on Pinterest or in one of my many magazine subscriptions, but I feel like I created it on my own so here goes.

I cut the corn off of the cob. I spread it out on a baking tray with a little olive oil and roasted it at 350 degrees for about 15 minutes (maybe less). After roasting, I put the corn in a Pyrex style bowl.  I cut up a tomato and placed it in the bowl as well.

I will never be mistaken for a food photographer.

Next I tossed with feta cheese and sprinkled with Old Bay seasoning.

Jumbo size feta and Old Bay…hate to be caught without either ingredient. 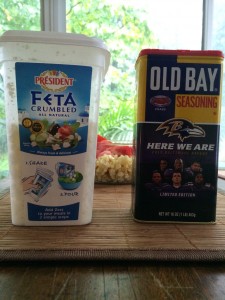 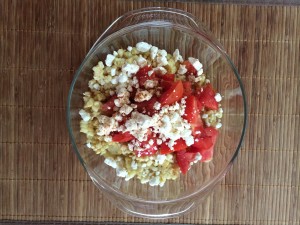