Twice each summer-ish season we are taxed with trimming the hedgerows of forsythia, honeysuckle, “mystery” bush, and crepe myrtle that line the boundaries of our yard. We do not own these bushes; they are welcome guests which provide privacy, but propagate in height and width the entire growing season. The deer do not enjoy the above named bushes as dietary delicacies thus we are left to tame the jungle.

We have  tried to place a sign..”Kids Eat Free” on the hedgerows…Humpf! Picky eaters! 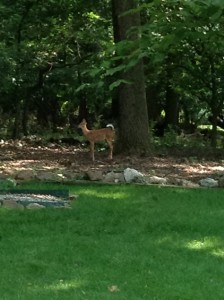 The deer bring the kids for a midday snack on the hosta.

There are no yew in the hedgerows, but Taming of the Forsythia does not have the same Shakespearean literary impact all of you wonderful readers (thank you nine followers) have come to expect. So please just go along with Taming of the Yew.

We do own a yew. It camouflages the large outdoor Rubbermaid container we use to store the trash cans and keep unwanted pests (specifically raccoon…yes, I am calling the animal out) from enjoying the remnants of past meals. 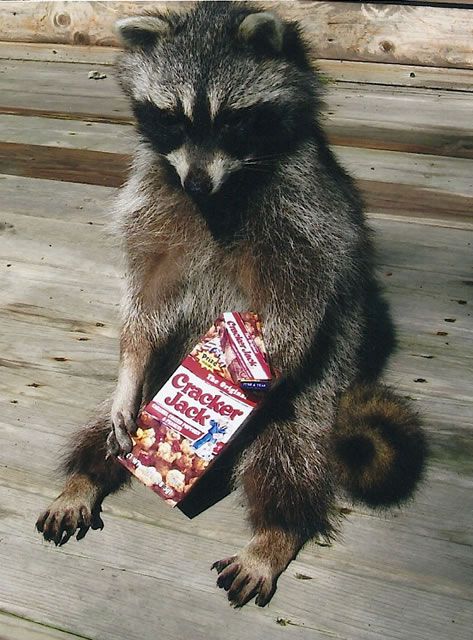 Not our Cracker Jack or raccoon, but if one of the locals unveils a snack obsession from my trash cans; it could be embarrassing.

Back to the bushes: 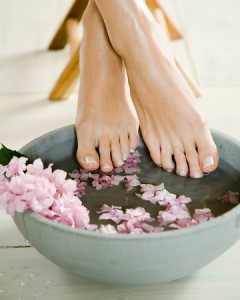 The taming is not a  pleasant task and it is time-consuming. So when the Hubster mentioned that Saturday was the day for the second taming this season, I countered with a million other things I needed to do: Words with Friends, Weekend Today Show, and put feet up to analyze need for pedicure, just to name three of the million. Then I was consumed by guilt, the Catholic kind which is the worst, and because I didn’t want him to be the only family member with poison ivy; I joined the trimming party for two.

Honestly, when I gave birth to two healthy Son-sters (count my blessings) I thought my trimming days were over…but no-no Son-sters your father and I will be just fine…I guess because you don’t live at home anymore you are excused. 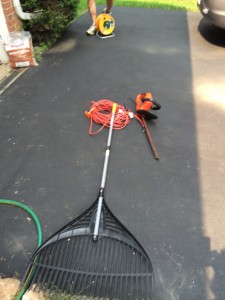 Hey, I needed to be certain that proper eye wear and foot wear was in place. I was working out back so I had more leeway in fashion choices. 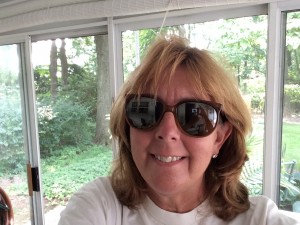 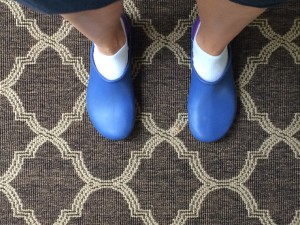 Oh no…wrong photo that is my sister-in-law’s car in Maine. A tree fell on it during a storm this summer…since Maine tends to be a quiet news locale this event was front page news. No one was hurt. 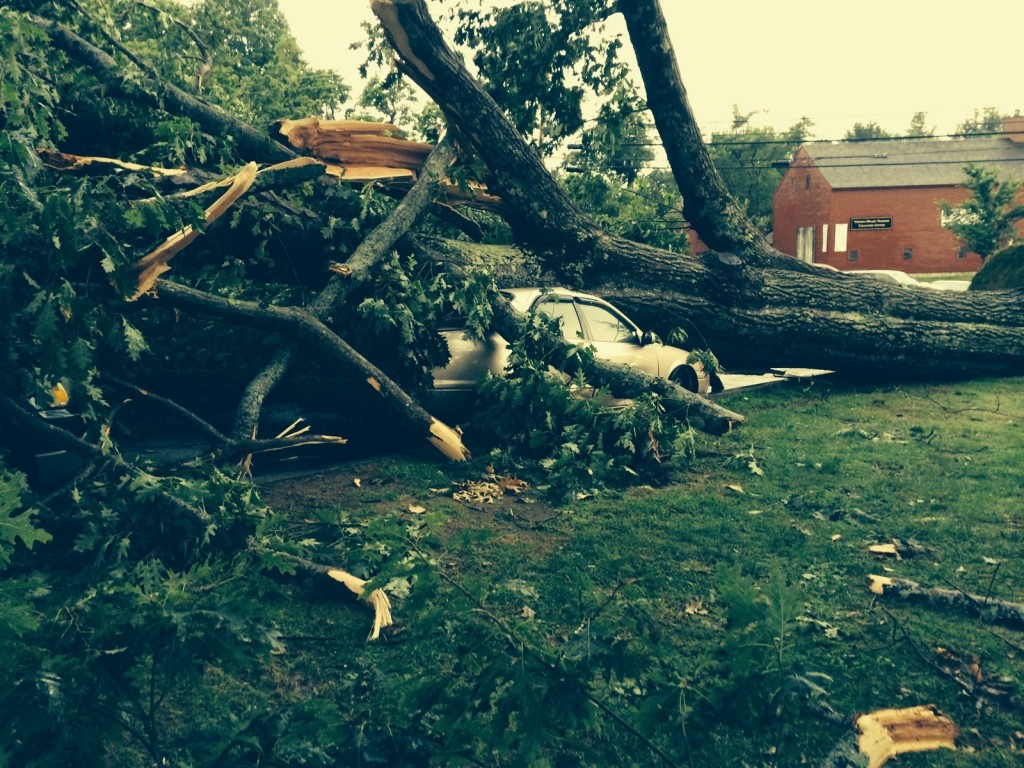 Here’s our damage…see much less daunting a task. 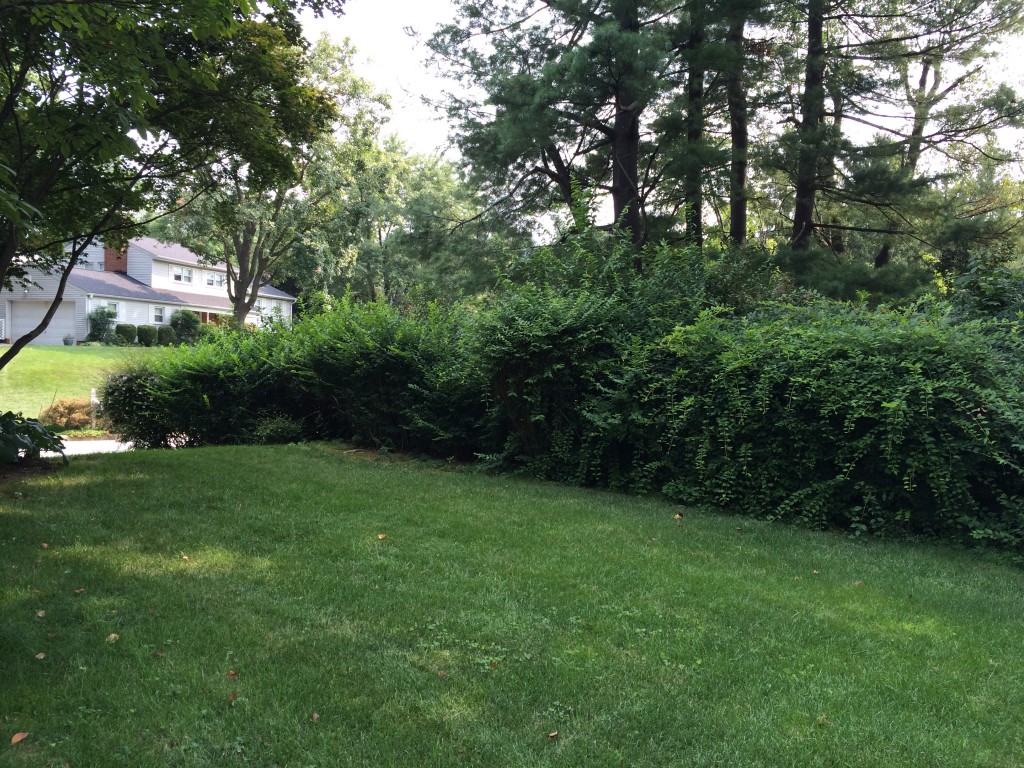 I gave the Hubster creative topiary license and checked that the insurance policies were paid in full. Please don’t try this at home. 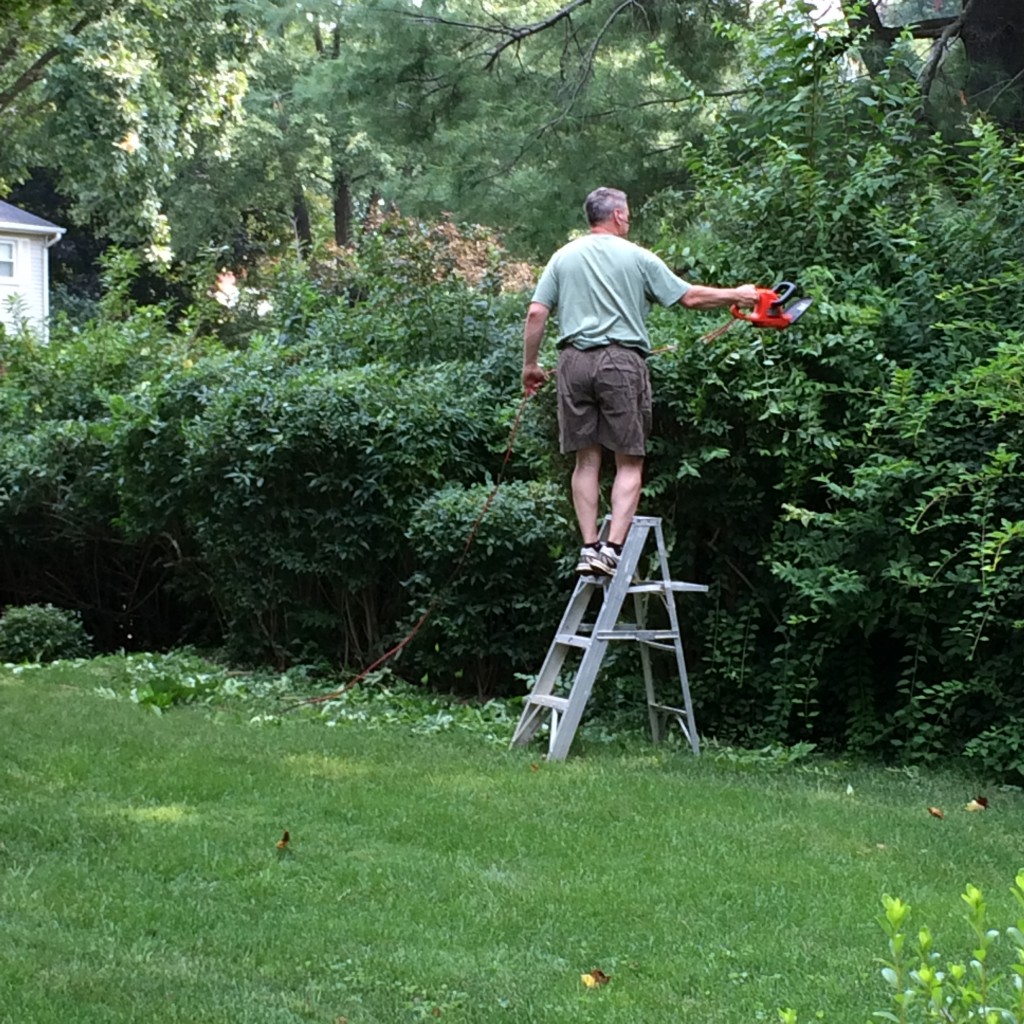 Step four: Bushes around the house…yew, azalea, boxwood and holly.

These are the after photos…I was busy trimming out back and he didn’t realize we didn’t have “art”, as they call it in the journalism world, for the before photos. Thank goodness this blog will never be mistaken for journalism. 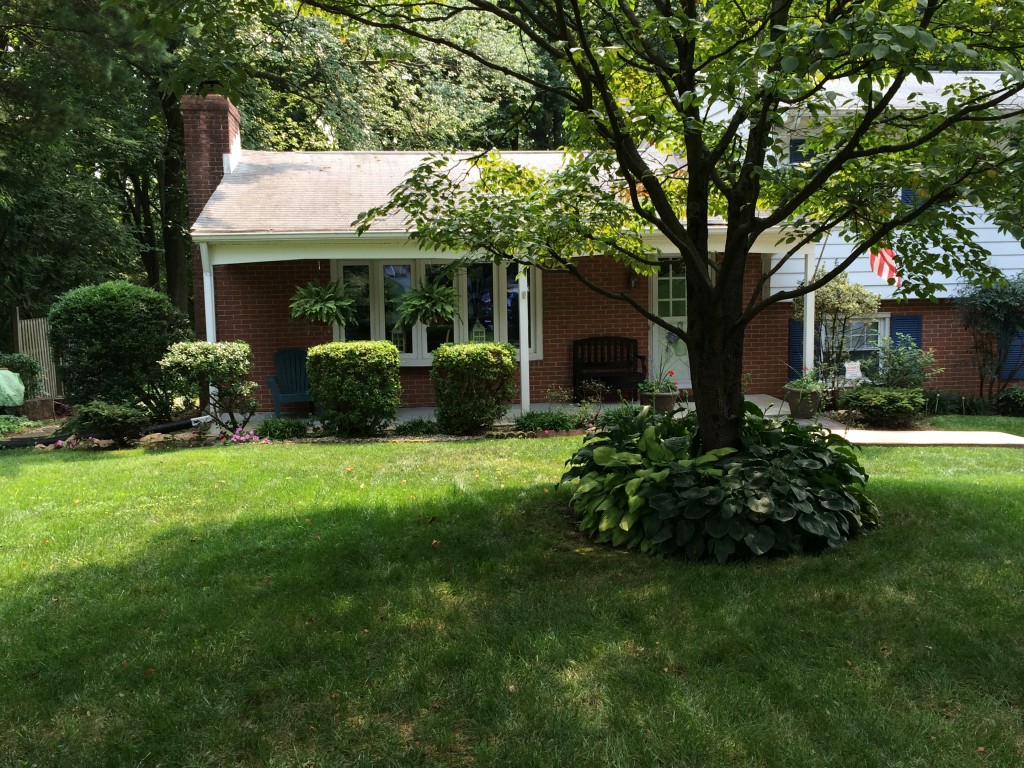 I told the Hubster to leave the yew alone…notice the bald spot on the corner. He trimmed a little more off the top than yew expected during the last taming session. I hope it recovers. I was pleased with the outcome of the bushes in front of the porch. 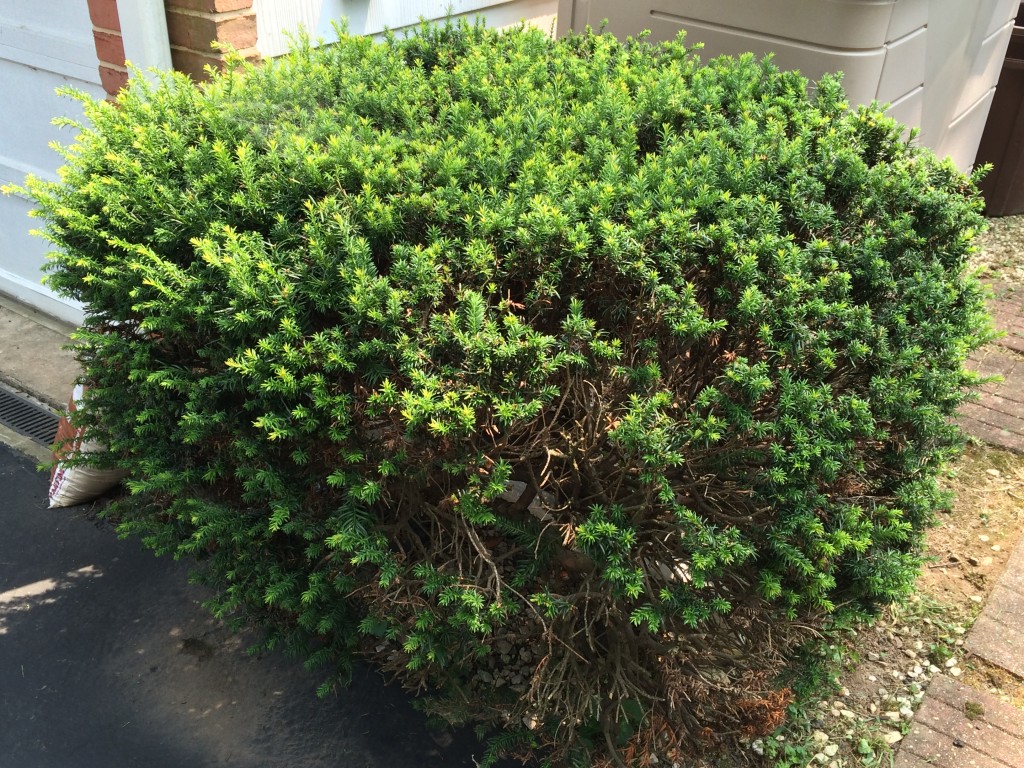 I trimmed the bushes out back I did not ask Hubster for feedback.

This is what I see in my head when I think about all my hard work and effort I put toward sculpting. 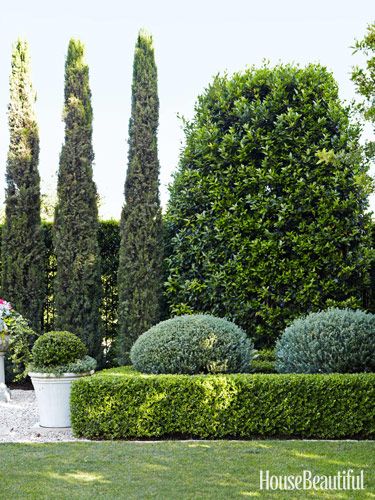 This is more the truth…can you believe I have never taken a class? 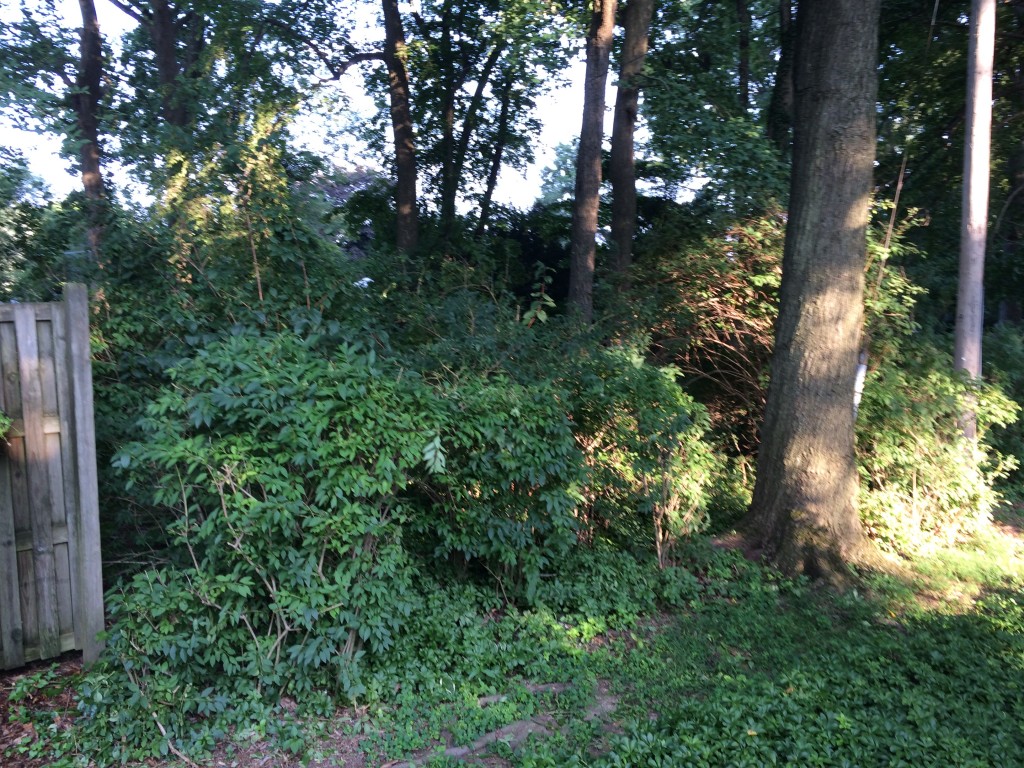 The front row is my work….the background bushes are overgrowth left untouched by the neighbors. We have lots of ground cover…Can I interest you in some pachysandra?

Here is an after of the Hubster’s handiwork on our side of the neighbor’s bushes in front…not quite the “slash and burn method” that I employ, but it will do. 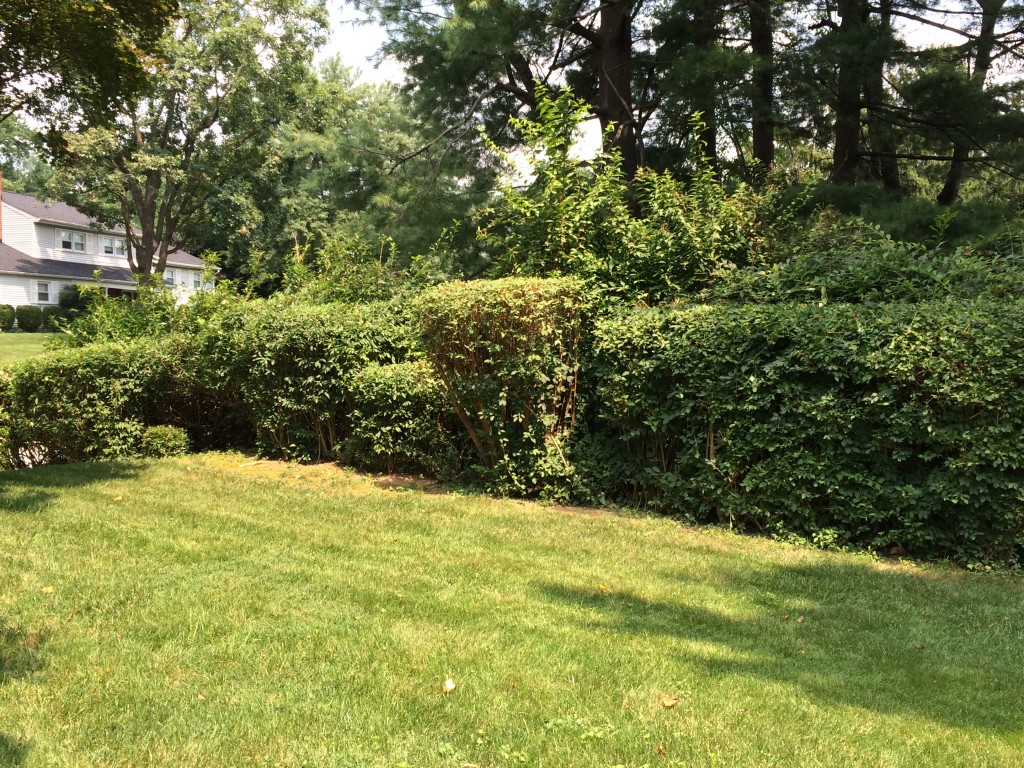 We dispense only the best generic ibuprofen Wal-Mart* sells to relieve forthcoming back pain and we swear by Dawn* “shower gel” to rid the skin of poison ivy oils that somehow manage to jump from unknown sources during the Taming of the Yew. 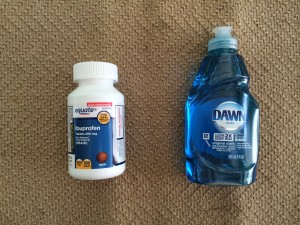 I hope you have enjoyed the view.

*no compensation for product endorsement…Update: As of today, free of back pain and no poison ivy