…a memory from a Country Home

In the last several days, I have been experiencing a bit of nostalgia hanging over my mood. One of my cousin’s daughter’s posted a family photo from 1963 on her Facebook page. While I am a baby in the photo and have no memory from that exact day, it stirred in me a time when life was so much simpler. 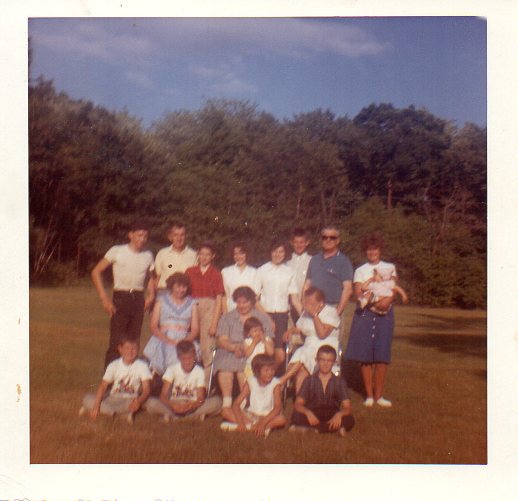 The photo posted was a black & white version of this one. Aunt Claudette* sits in the center front with my cousin, Joanne* standing at her legs.

Every time I see a photo like this from my youth I recognize the importance my parents placed on having an extended family when both of them had childhoods that at times resembled chapters in a Dickens novel. ( you can read about them here & here). It seems strange to think I am older now than my parents in this photo and many of my cousins & siblings are older than the great-uncle and his second wife also in the photo.

A day like the one above usually began as a Sunday excursion via our family station wagon after Mass to visit the country cousins. They lived 40 miles outside of Boston in Grafton. Typically, we played outside all day; piling into their rowboat (no life vests), trekking through the surrounding woods (no tick checks), riding their bikes (no helmets), and we didn’t return home until it was dark. Oddly, when we played hide and seek my cousin Joanne (closest in age to me) and I always had the best hiding place because the older cousins never found us until it was time for the city cousins to go home. We were the city cousins because well, we lived in the city.

Not our wagon and this is not us….we resembled models in a magazine and the four girls are missing.  credit: gearpatrol.com

My Aunt Claudette was a gentle soul who never ever wanted controversy and looked for the good in everyone. She was two years older than her brother, my father, the Milkman. Aunt Claudette and my father shared a birthday. She and her husband, Uncle William* married sometime around the start of WWII. I only know this because my aunt wrote letters to my father while he was in the Army Air Corp during the war and described the milestones her firstborn child, my cousin, Janine* was making.

In addition to writing about sewing, baby teeth and a birthday, she cautiously penned her concerns for my Uncle William, who I believe was serving in Europe. My own mother told me that Uncle W. was a driver for General Patton. Although I have never been able to verify the Patton information to be true, if in fact true, then it would explain a lot about my Uncle W.’s outward “crusty” and at times abrupt personality. While I mean no disrespect toward my Uncle, it was my first impression.

I suppose those first impressions are firmly in place, but my time spent in their country home with vast lands along the edge of the Blackstone River were some of my fondest memories and chipped away the “crust” of my initial impressions. 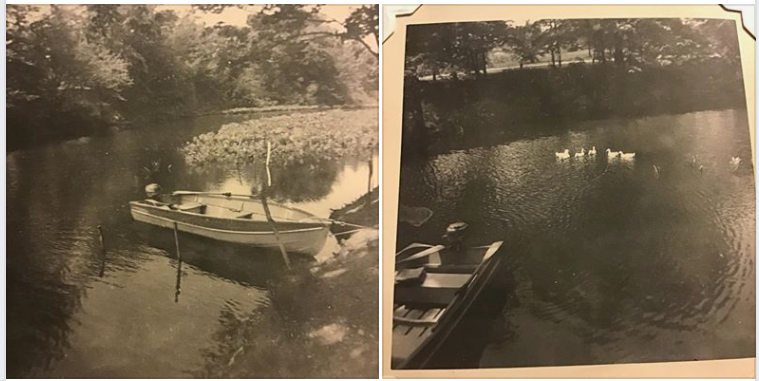 My cousin Joanne just found these photos, of the boat & ducks. Just as I remember it.

Aunt & Uncle had seven children. My own parents noting the fun Aunt & Uncle had with all those children went ahead and matched them with seven children of their own. Honestly, I believe their enthusiasm toward their Catholic faith played more a role in the large families for both. From 1947 to 1965 there was a toddler roaming underfoot at the family gatherings. 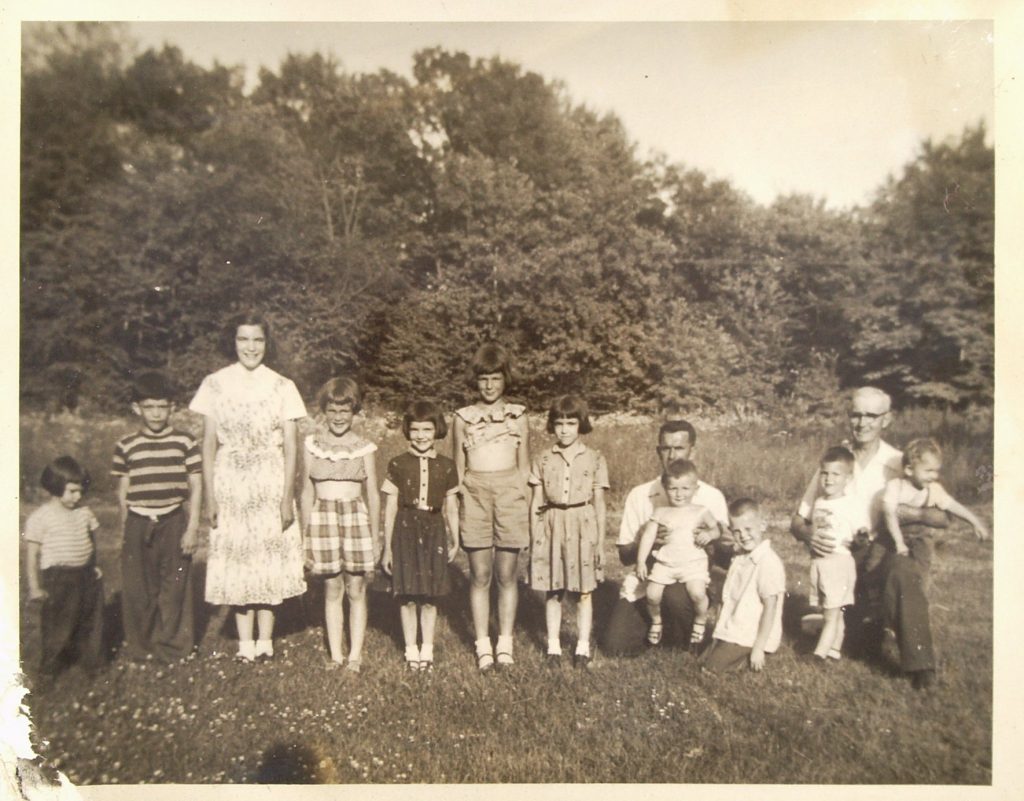 Long before I was born, I count 11 of the 14 cousins. My father holding my brother, Baby Boy, and Pépé, my paternal grandfather, his arm around the waist of my brother, Piano Man. Pépé died six months after I was born.

I can remember the excitement just getting into our car for the hour-long ride. Seating arrangements in the vehicle were determined by the person who yelled the loudest, so that meant my mother told us where we would sit. My father took mostly back roads although the Massachusetts Turnpike was literally a border of my Uncle & Aunt’s property. As I understand it, my Uncle and Aunt once owned the land that the section of highway crosses.

As we drove into Grafton, my father would point out various landmarks; like the firehouse where his cousin’s husband was the town fire chief, his Uncle Raoul’s residence, and the lakeside home where his father and step-mother had resided for a time. Once the lake was sighted, I knew my country cousins homestead was just about to be in view. 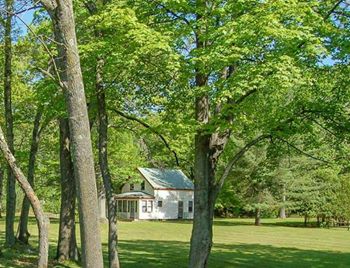 The house set back from the road. A large circular gravel drive met our approach from the street. A barn (not pictured in this photo of unknown origin) was to the right. The barn housed Uncle’s tractor, a very old pick-up truck, the fleet of family bicycles, and a menagerie of bunnies, one named Thumper.  In front of the barn was a flagpole. The Blackstone River, out of view in this photo is to the left of the front of the house.

View from the front of the house to the Quinsigamond River which then merges with the Blackstone River.

A giant swing set sat only yards away from the river. I could never swing as high as I wished on my own, I always required a push to reach the lower branches of the towering trees. 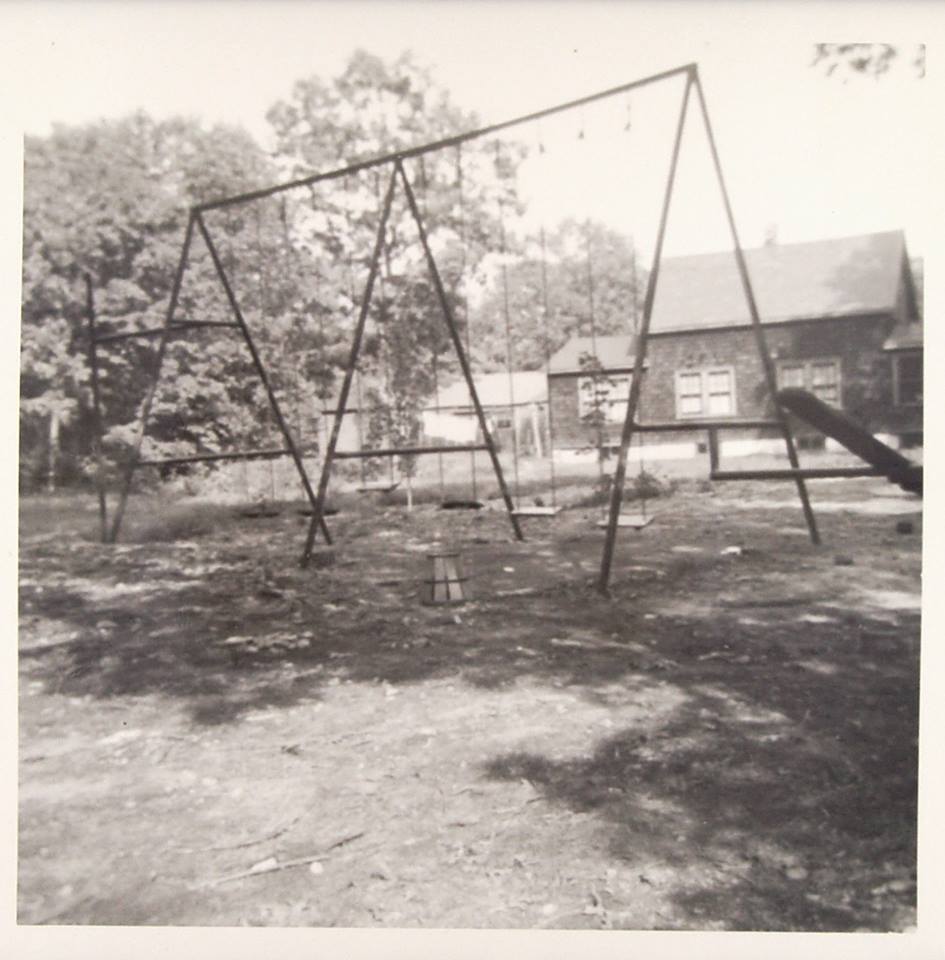 The swing set with six tall swings, two smaller swings hung from the bar to the left ( I don’t see them in this photo), and a see-saw to the right. The barn is shown on the background from this view of the house.

I seem to remember visiting the country cousins at least four to five times per year, but I also spent several lengthy stays when I was four and five because my mother had surgery that kept her hospitalized for several weeks and another time my mother went to Canada to settle my Aunt Gabrielle’s (another of my father’s sisters) estate after she died in a car accident in 1968. My father had to work and the older siblings were all in school during the day so I was shipped off to stay with Aunt Claudette and Uncle William. Although I missed my family, I loved staying there.

One morning, as I sat eating breakfast at the long kitchen table I gazed out the door to the side of the house, as Uncle walked toward the flagpole. His army boots (he wore every day) created a glistening spray of mist around his feet as he stepped through the dewy grass. Once at the pole, he carefully unfurled the red, white, and blue flag; he clasped the snap hooks through the grommets and raised the flag in the rays of the morning sun. He did this every day. 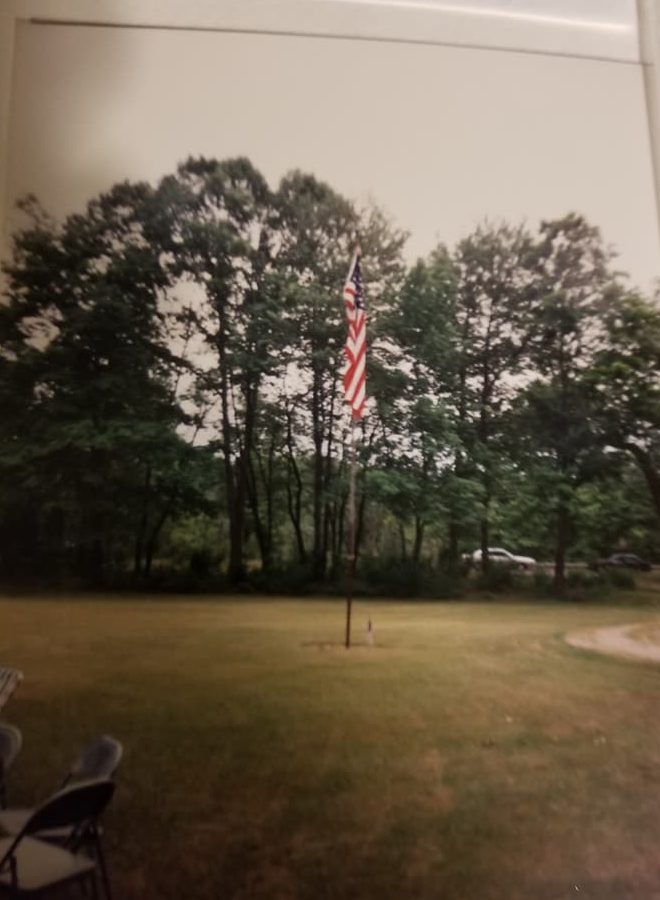 I know Uncle worked in a factory, but I don’t know what he did. He rose early not only for work and the flag, but Uncle raised ducks and geese to sell the eggs. Their kitchen housed an extra refrigerator just for the eggs and loaves of bread in the freezer to feed the birds. The duck coop was set back to the left of the swing set. It was built by Uncle of salvaged wood, covered in tar paper, and windows at the front. 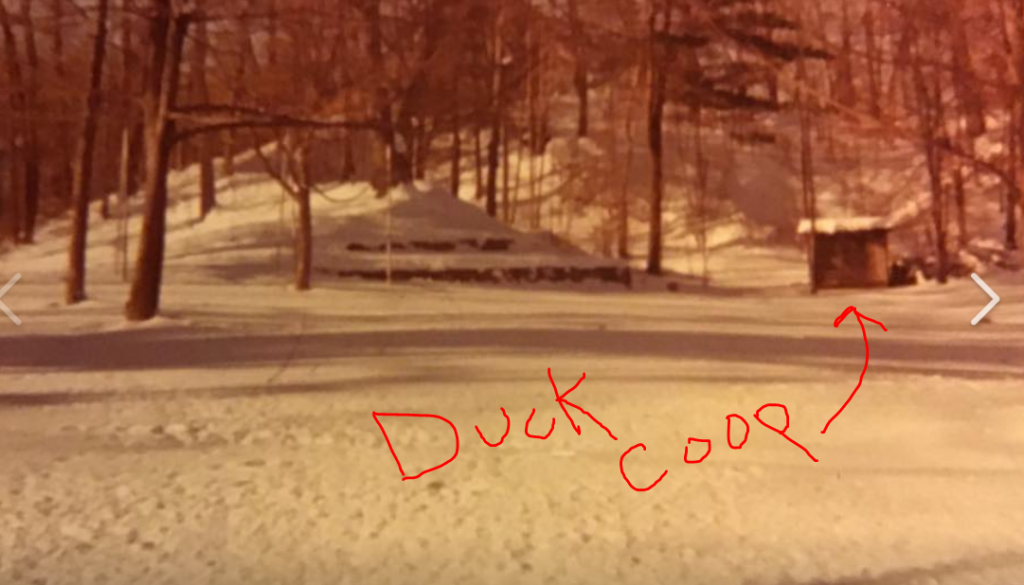 Several mornings I had begged to go help him with the eggs. My offer of assistance was refused.  Being quite precocious and not one for accepting no for an answer, I implored him with the fact the Make Way for Ducklings was my favorite book. 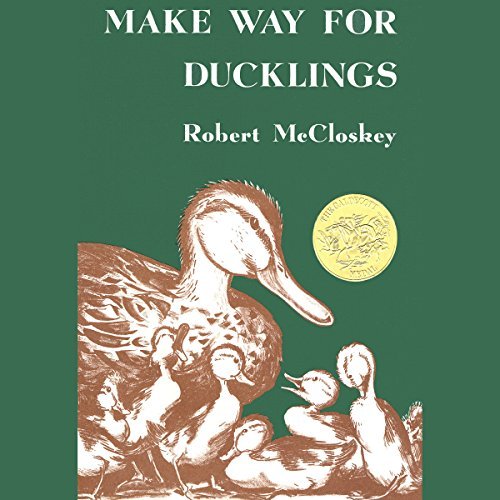 As I mentioned earlier, I was one of the city cousins so I was unprepared for the “fowl” odor that was about to greet my delicate nostrils inside the coop. The hay and nests were clean, but ducks beings living things not only produced eggs, they yielded a significant amount of morning malodorous waste along the straw at the floorboards. As Uncle plucked the eggs from the nests and encouraged me to do the same, my body convulsed in the aroma. I danced around the coop gagging and heaving.  The ducks and geese quacked and squawked at my intrusion on their morning routine. Knowing I had pleaded with Uncle the opportunity to join him, I desperately tried to reach for one of the oval wonders that sat poised for the taking.  I pinched my nose with one hand and stretched the other toward the nest. Just as my fingers were about to surround the warmth of the elliptical sphere, one of the geese snapped at my thumb. I whaled, cried, and continued the nauseous two-step around the fetid floor. I shuffled my sneakers through duck poop and ran toward the house. Uncle could barely keep control over his fragile load in the basket as he roared with laughter. At the time, I thought it was mean of him to laugh at my pain, but thinking back I know my behavior must have created quite a comic sideshow. 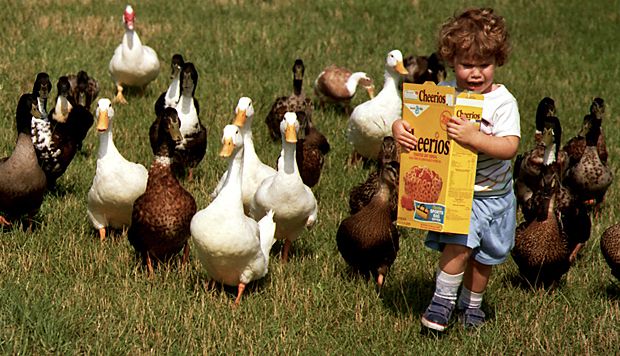 Not me, but I did enjoy a bowl of Cheerios. credit: Pinterest.

Aunt Claudette and my cousin, Joanne greeted me at the kitchen door. Aunt Claudette hugged me. She tended to my dented thumbnail and wounded pride, while Joanne and Uncle deposited the eggs in the refrigerator. Once safely refrigerated, Uncle would pull two frozen loaves of bread from the freezer to thaw for the day. He would walk back out to the coop and open the door. The ducks waddled behind him as he made his way toward the river’s edge. One by one, each would dive into the river with Olympic precision and synchronicity. When Uncle returned from work at the end of the day, he would stride to the bank of the Blackstone and begin quacking, within minutes the ducks and geese would return. Uncle broke the bread and tossed the bits toward the hungry ducks. With greedy quacks, the ducks consumed their meal without hesitation. Since this activity amongst the waterfowl involved an open-air environment, it was one in which I could continue to participate. Uncle would then march his flock back to the coop for the night and repeat the next day. I don’t remember the year there were no more ducks, but I never went into the duck coop again. 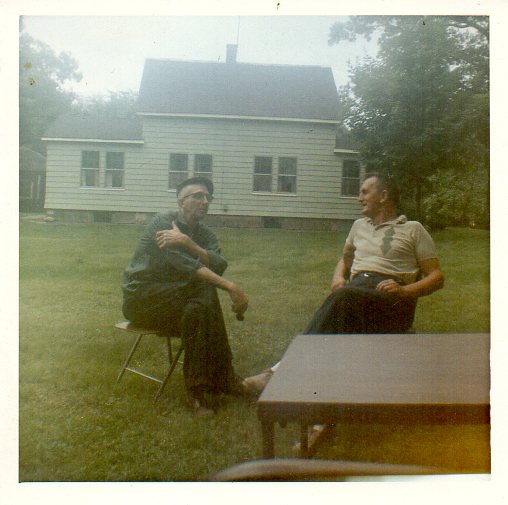 Uncle in the cap, note the army boots. …the Milkman enjoying time with his brother-in-law.

The house and lands which my Aunt and Uncle owned have been vacant for many years. My Uncle died in 1991 and my Aunt in 1992. The house and land were sold in 1993. I have just learned that back in December 2017 the house, which still sat empty on the land, was burned in a fire which continues to be investigated.  While the house may be in ruins, the memories are forever blazoned fondly in me. 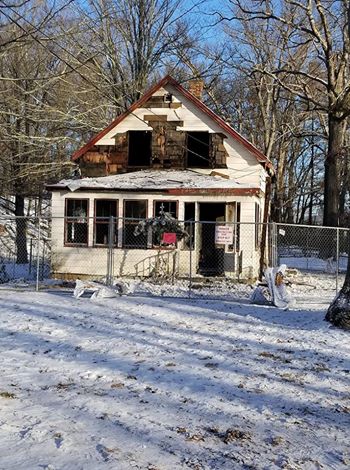 When I stayed for long stints at the homestead my bed was just below the right front window on the second floor under sloped eaves.

I hope to write a few more posts about my visits to the country cousins…so stay tuned.

Article about the house and fire…real names included, here.