Approximately 46 years ago I became an aunt at the ripe old age of seven. At the time, I was devastated that my brand new niece would be given the same name as my own. I can’t explain why I felt that way, but I do remember pouting on the steps of my childhood home once I learned a girl was born.

My namesake being held by her mother. 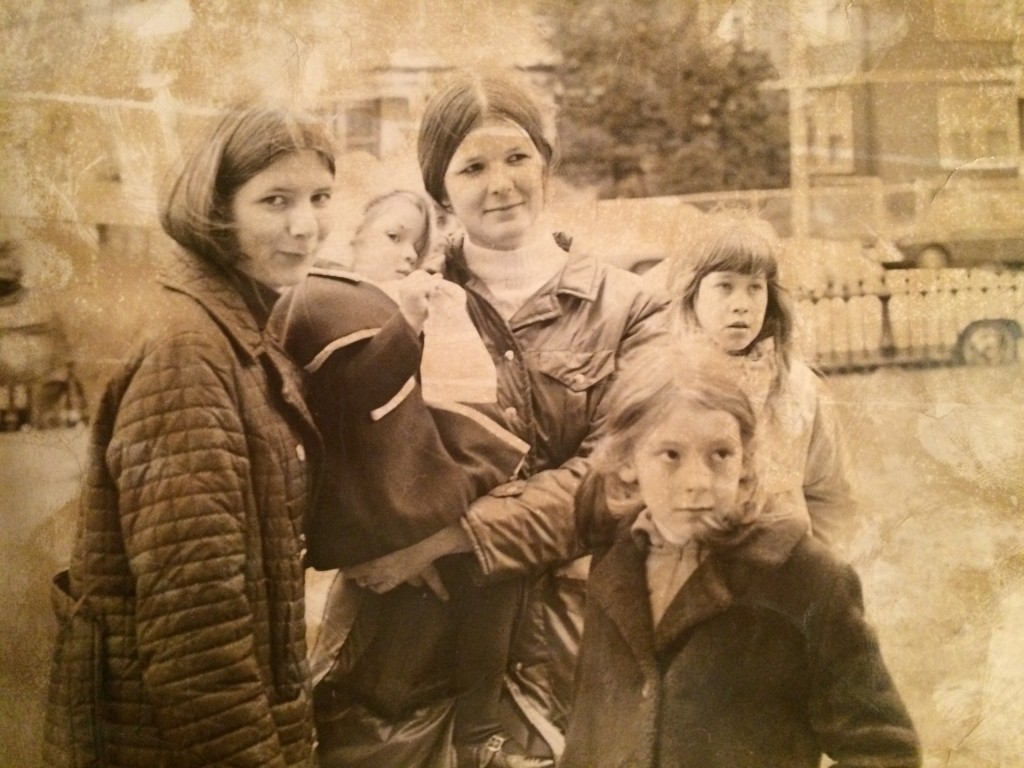 Upon my first visit to the new parents’ home, I found the name borrowing to be very exciting.

I became known as Auntie C…because of my closeness in age to the majority of my nieces and nephews, I was anointed their leader and playmate. I would be an aunt 10 times before I became a mother myself. My own two sons would look up to their cousins who were older, wiser, and “the coolest”. (Little did the Son-sters know I was responsible for their cousins’ “coolness”.)

In what seemed like a flash, my nephews and nieces began to get married. Then as nature would follow, children would be born. Suddenly, my nephews would be called Uncle and my niece & namesake would be called Auntie C…my own brothers and sisters would also be called Uncle and Aunt (at present, 8 more times). The problem was my name…how could there be two Auntie C.s? It was decided that they would call me Great Auntie C. Obviously, I loved being called “Great”…when the name fits, it really fits.

A boat ride just for me… 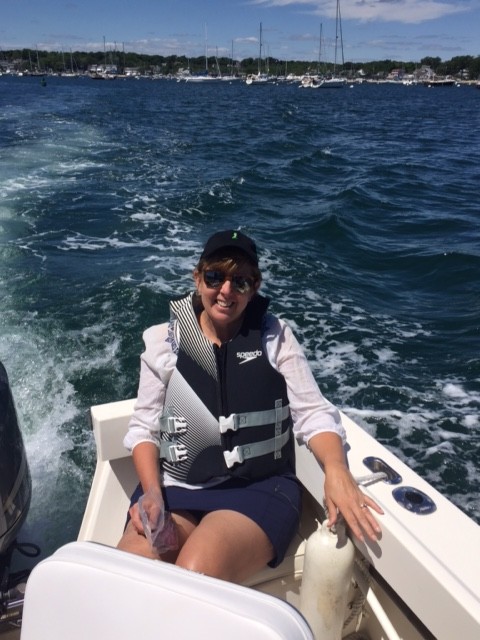 Perhaps one of my relatives could have told me I didn’t have my life jacket safely buckled.

When my niece, C’s son began to talk, he heard all of his cousins call his mother, Auntie C. One morning he woke up and asked his mother, “Mom, are you going to be Mom today or Auntie C.?”

She laughed, “I am your Mom, your cousins call my Auntie.”

That confusion aside he asked about me…she explained the relationship. It just so happened I was arriving in town that day. All the cousins were together when one of them asked, “When will the “Greatest” Auntie C. arrive?”

My niece and her son, Brendan* turning toward me. 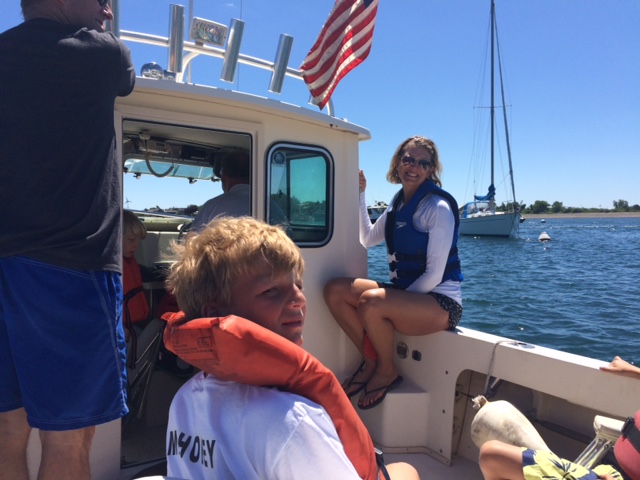 My nephew, Link*, beginning to feel a bit queasy inside the cabin.

Everyone laughed and a name was born….they call me the “Greatest”. You should see the looks I get when one of them calls out across the beach, “Greatest, are we going to build a sandcastle?” or “Greatest, can we get an ice cream?”. Needless to say sandcastle building and ice cream out the “ying-yang”.

Ask and ye shall receive 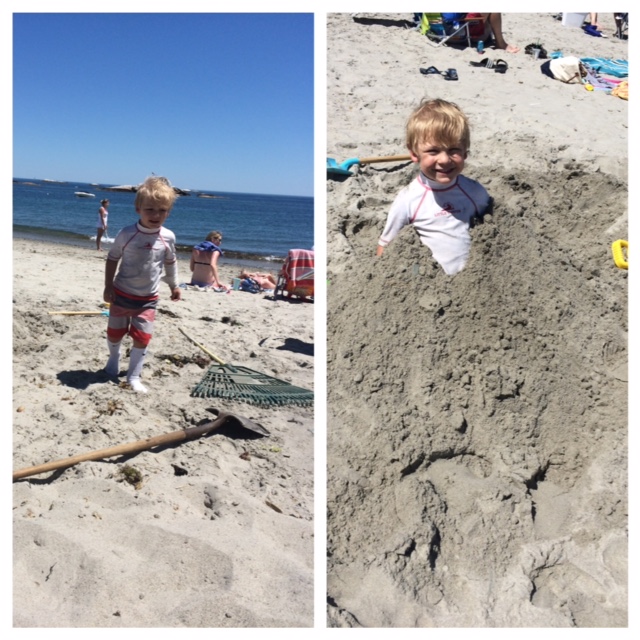 Mason*: “Greatest can you build me a sandcastle?” Greatest: “Of course I can build you a sandcastle.” Socks help keep the sensitive feet from burning on the sand. 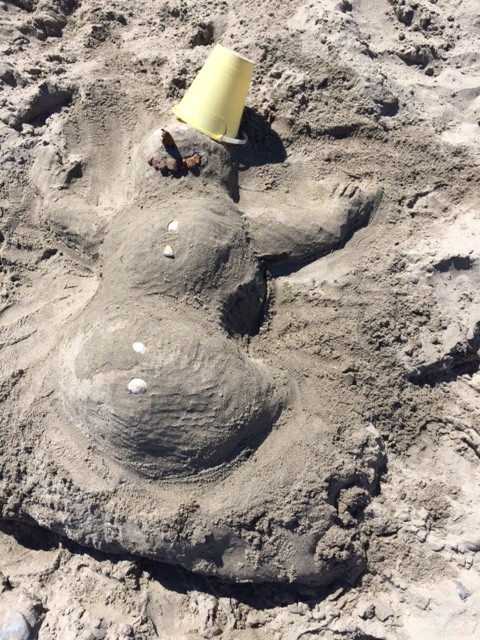 Great Niece and Great nephews: “Greatest, we need to practice for the sandcastle competition.” Greatest: “Do you want to build a snowman?”

When it was time for the competition, I must admit I was a bit tired from all the castle building, but the “Greatest” tries not to let them down those who idolize her. 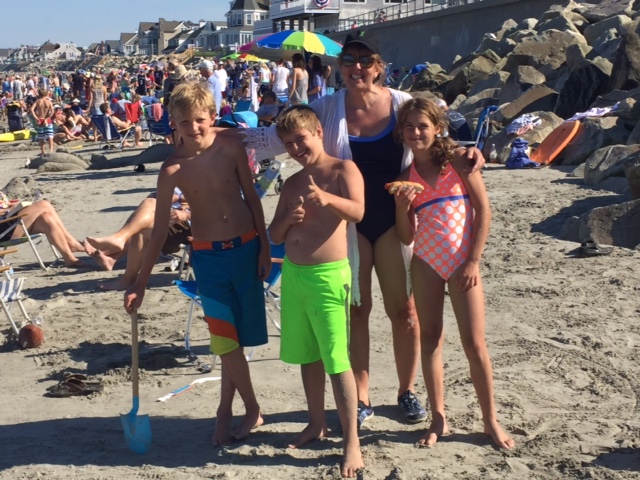 Try to look only at the youngsters. Their fearless leader should have closed her beach cover-up. 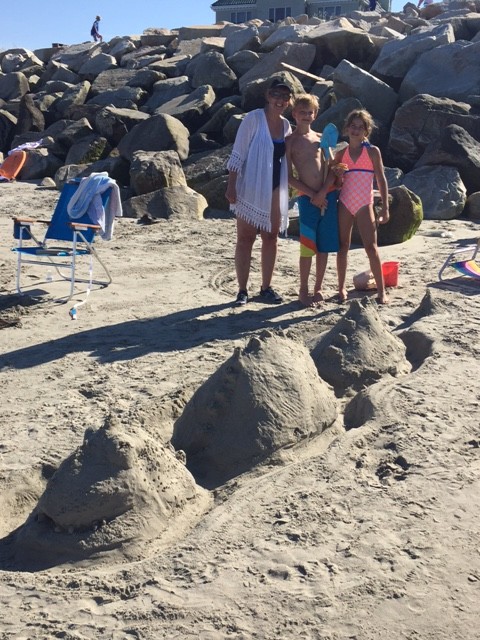 One of our team members was wooed away by the call of free ice cream. 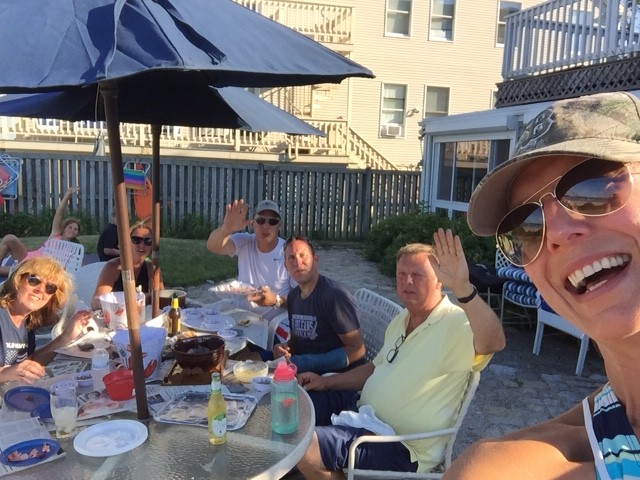 Appetizers in the yard…steamed clams, steamed shrimp, and Maryland crab dip. Interestingly, my niece, C’s fiancé, Brad* has a cast on his arm (an unfortunate arm meets ice incident…He’s a wonderful guy and I am thrilled for both of them). All weekend, all we heard was, “I have a cast. I can’t build a castle.” Seems eating clams, shrimp and crab dip are not a problem in a cast. 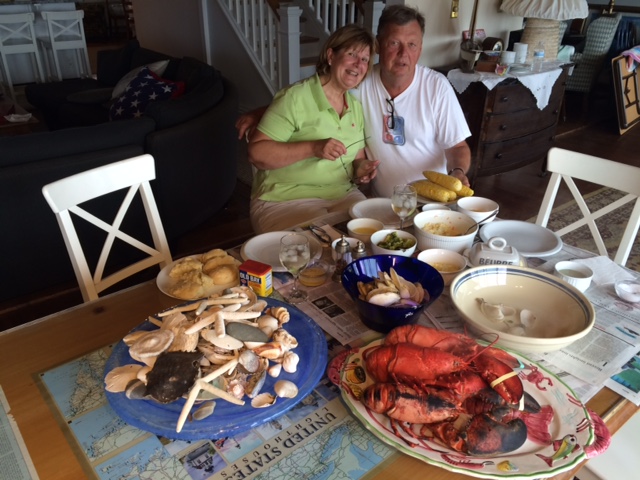 Family Matriarch and Kitchen King….this was not the meal we ate after the appetizers, but I forgot to take a picture because I was overwhelmed with the food for that meal which included; mussels marinara, steak tips, crab cakes, homemade potato salad & cole slaw, and corn on the cob. The Kitchen insisted that we have lobsters one night, who am I to say no.

Did someone say Ice Cream?

Once sandcastle and ice cream needs are met…it is time for s’more fire on the beach and fireworks….

The “Greatest” does not disappoint. 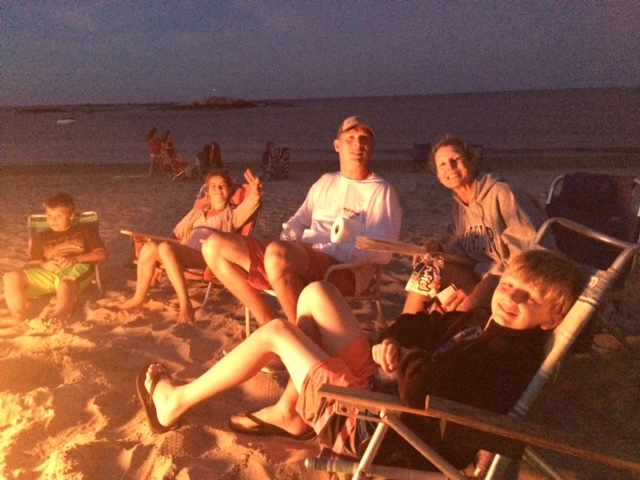 Lucky photo of remnants of sunset and first fireworks of the evening.

Because homes at the beach don’t come free, it is always a family effort in good times and maintenance. Everyone contributes whether cooking, entertaining, (see above photos)…. 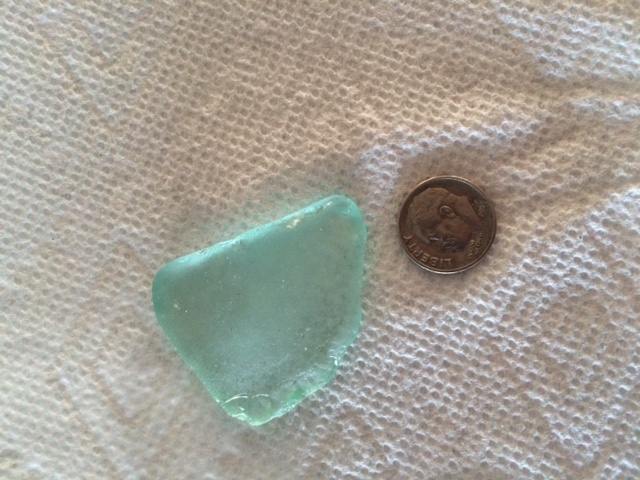 Found by the “Greatest” 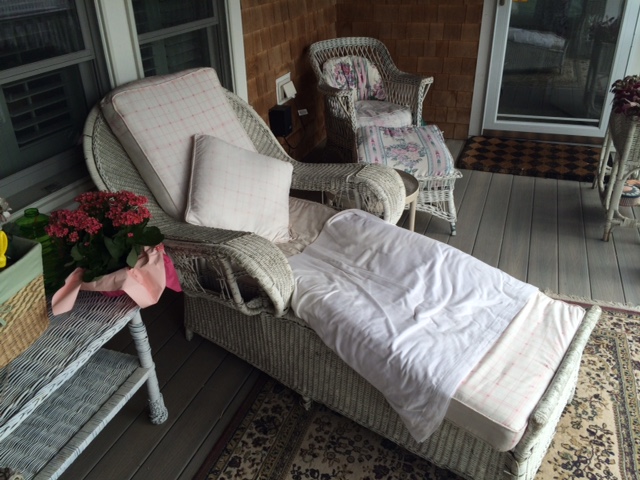 “Greatest” can you bring your sewing machine with you?

Blood: I stabbed myself in the finger with the seam ripper. Sweat: They don’t call it a sweat shop for nothing. Tears: Did I mention the stabbed finger? I’ll be fine.

and learning something new.

My phone has a panoramic photo feature. I did not know how to use it. My nephew, Adamo and my great-niece, Scarlett taught me how to use it. 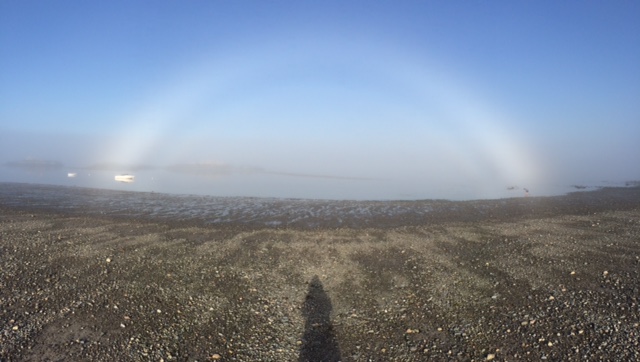 On my last day, I woke up to a rainy day, eventually the sun came out, but the fog off the water was stubborn. Suddenly a “fogbow” (fog rainbow) occurred. I managed to capture it.

Have a “Greatest” day!

PS: Speaking of the greatest….I was able to squeeze in a lunch with my greatest blog inspiration, Katie Clooney of Preppy Empty Nester…it was like we have known each other all our lives and so much more….Lunch was the greatest! 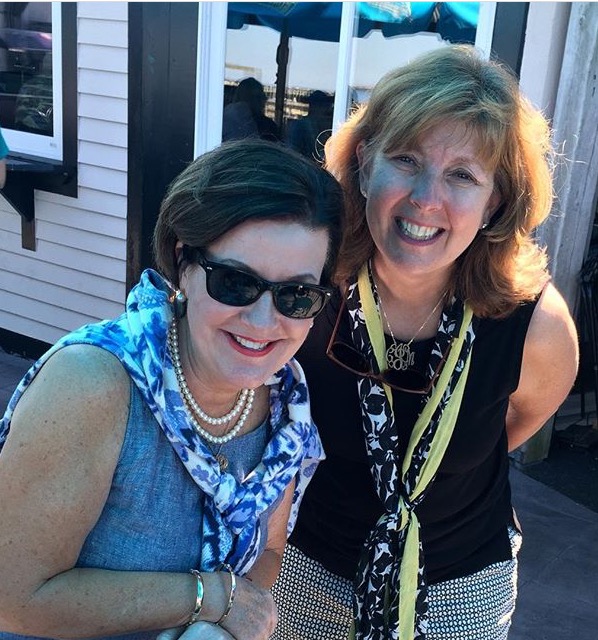