As promised, our snow event was historic. I didn’t have to go to school on Friday because the Governor declared a State of Emergency ahead of the storm. This is a good thing: 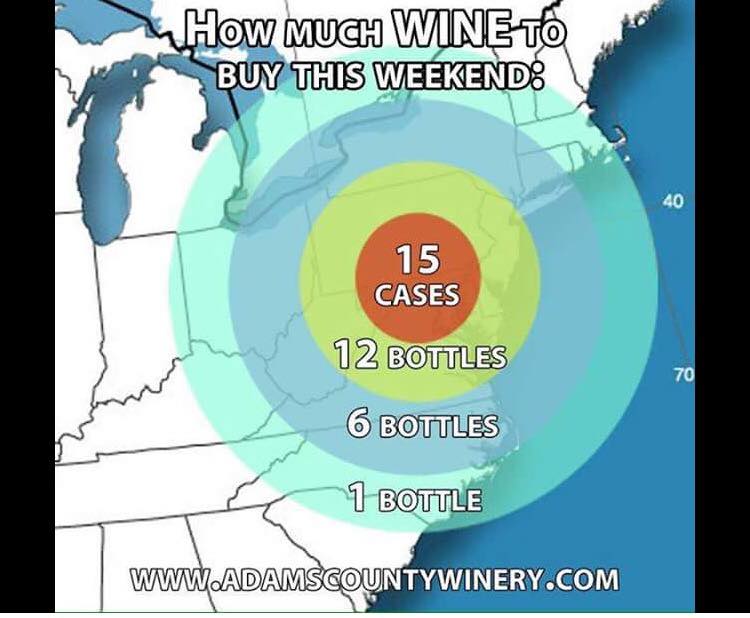 That bulls-eye is right above my town, so in the wee small hours of  about 7 am on Friday, I headed to Wegman’s. Here was the sky on Friday morning as I ventured out on my assigned duties. I believe this weather proverb proved itself true. 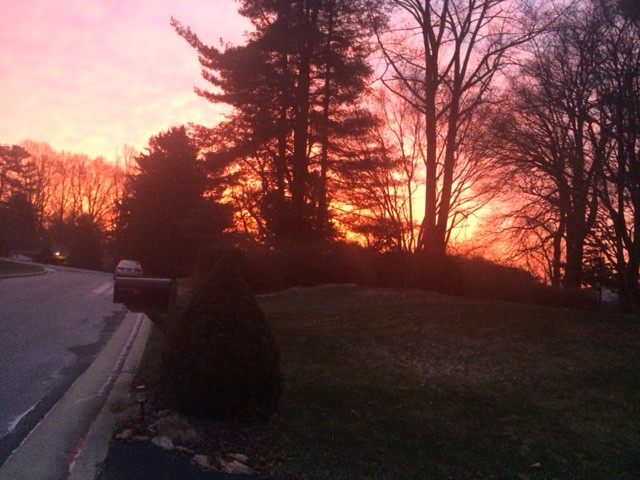 don’t get caught without alcohol warning.

I believe that is how the proverb was intended to play out. No worries though,  I picked up all the essentials… 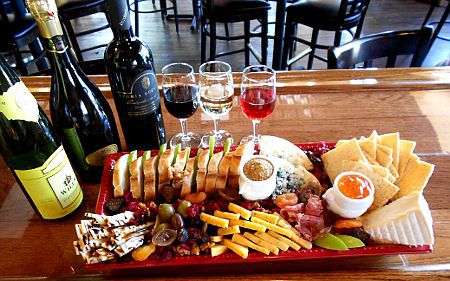 In contrast, this is what my nephew, Martin and his son, Link, picked up to prepare for the snow in their neck of the woods.

His wife, Leslie posted this to Instagram as she felt these choices did not benefit her. I must agree, I see no wine. She has two young boys under the age of eight.

Second reason: Once the food and beverages are secured, one must think about killing time while hunkered down.

After Wegman’s, I headed to the next important place on my list, 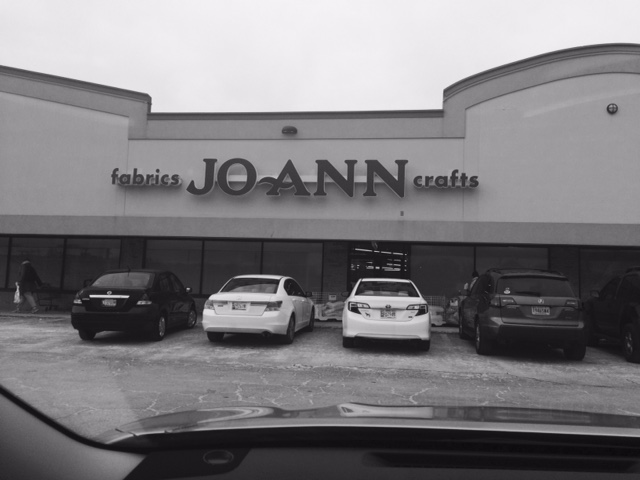 I had been texting all morning long to my teaching colleagues in giddy anticipation of the storm. Our art teacher sent a poignant text about missing an Ansel Adams moment in photography down in the city where she lives, as the birds she was about to take a photo of flew off just before she could take the photo. I sent her my Ansel Adams moment instead.

I went to the fabric store to pick up a spool of thread, but they had tons of fabric on sale. I tried to maintain composure as I snagged a few bolts to prepare for Project Snow Day. Unfortunately, my personality (fabric hoarder) is more that of kid who carries his brother into Boy’s Town on his back and says, “Hey, he ain’t heavy, he’s my brother.”

The carts are  free to use, so I had no problem lifting this fabric to the cutting counter. I purchased only small lengths of this fabric, so taking it home was no problem. 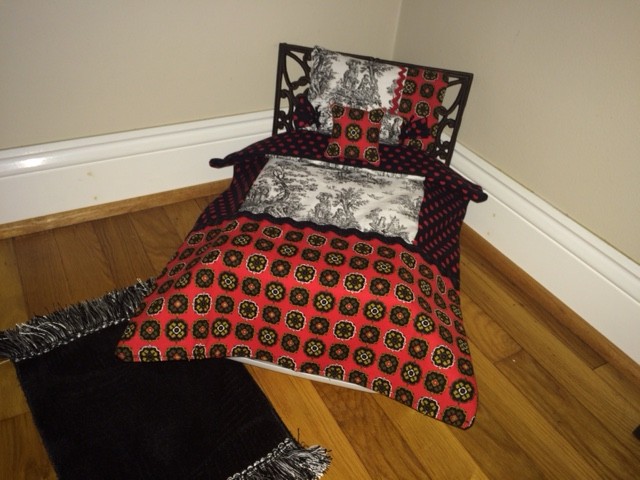 Last year, I made an entire collection of doll clothing for our PTA’s Spring Auction.. This year, something for the home of American Girl doll.

Final reason (and most important) about having a State of Emergency Snow Day: It does not count toward missed school days. Nothing more to say! No photos, don’t want to seem too gleeful! 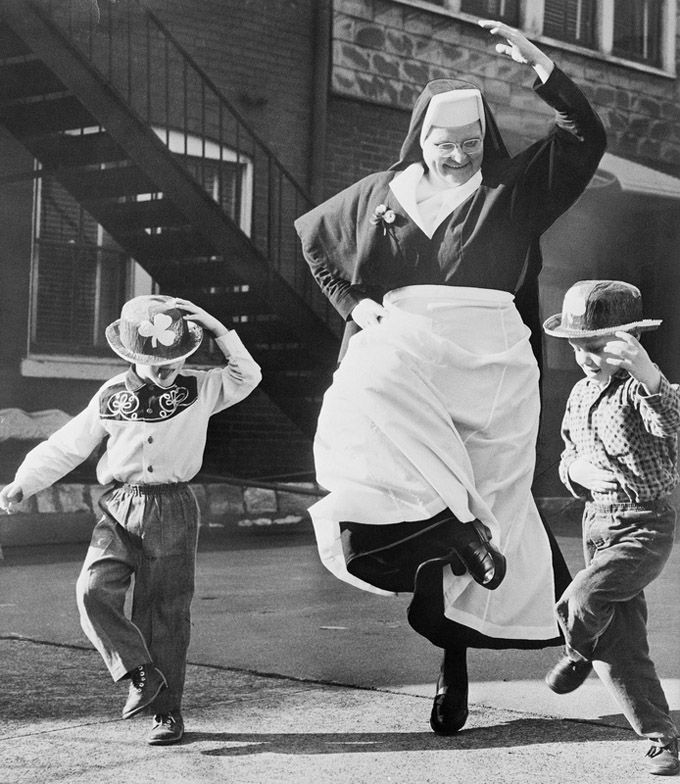 Sorry, hard not to tap my foot! 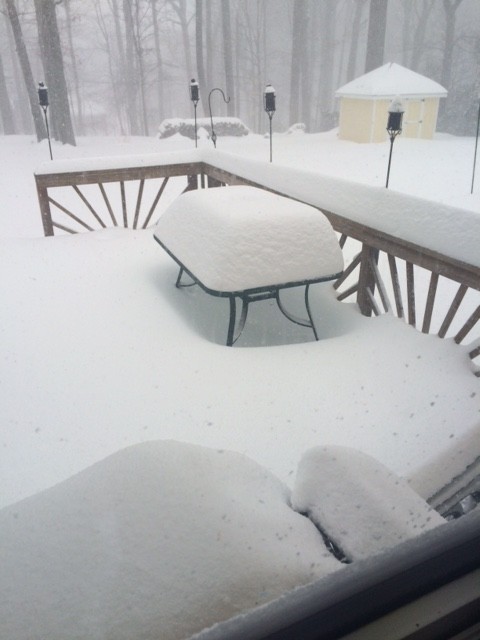 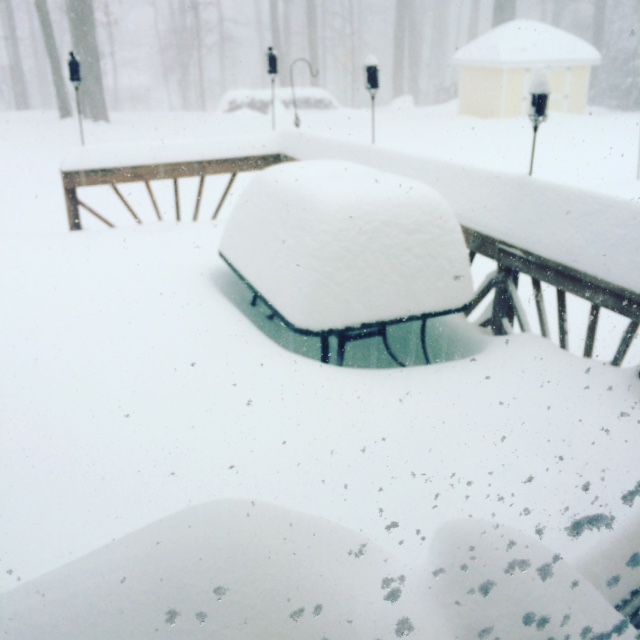 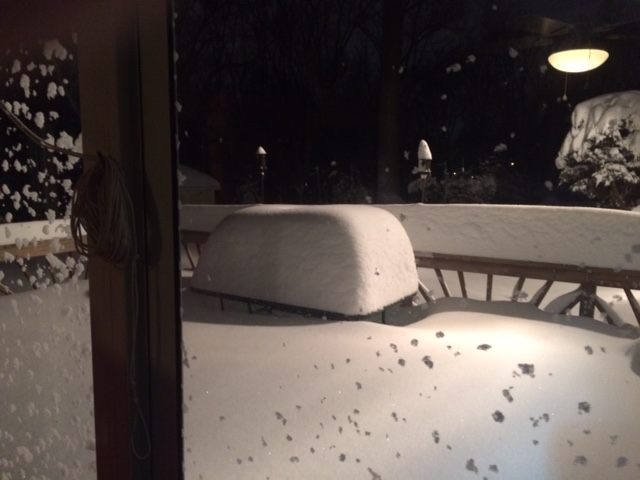 I do not curse lightly!

I am fortunate, for I married  an EAGLE SCOUT!. The man was prepared…in addition to sending me on the mission to buy food and beverage before the storm, he actually went out Wednesday evening to purchase a new gas can (5 gallons), filled our cars with gas (though we are not going anywhere soon), and switched the lawn mower for the snow blower in the garage. Also, we live at the end of an electric line, when we lose power, we are talking days, not hours. Hubster moved a cord of wood to the front porch and prepared the blankets & air mattress to sleep in front of the fire-place. I will be making a donation to charity and sit in the front pew of Mass next Sunday (Catholics excused from attending Mass) for we did not lose power.

Thanks to all of you who lit a candle on our behalf. Now we know why we didn’t win the Powerball, this was our luck and trust me, I’ll take this kind of luck.

A few more miracles were yet to come:

After surveying our snowfall, Hubster determined the snow depth was “Snow Barrel Worthy”….this means crawling into the dungeon that is our crawl space. I did this in the spring…read here, but he never ventures to the crawl space.

The snow barrel holds our former ski wear. The last time we skied as a family was 2006. I don’t want to make you jealous, but we totally fit into our former ski gear.

Hats …one size, continues to fit all! 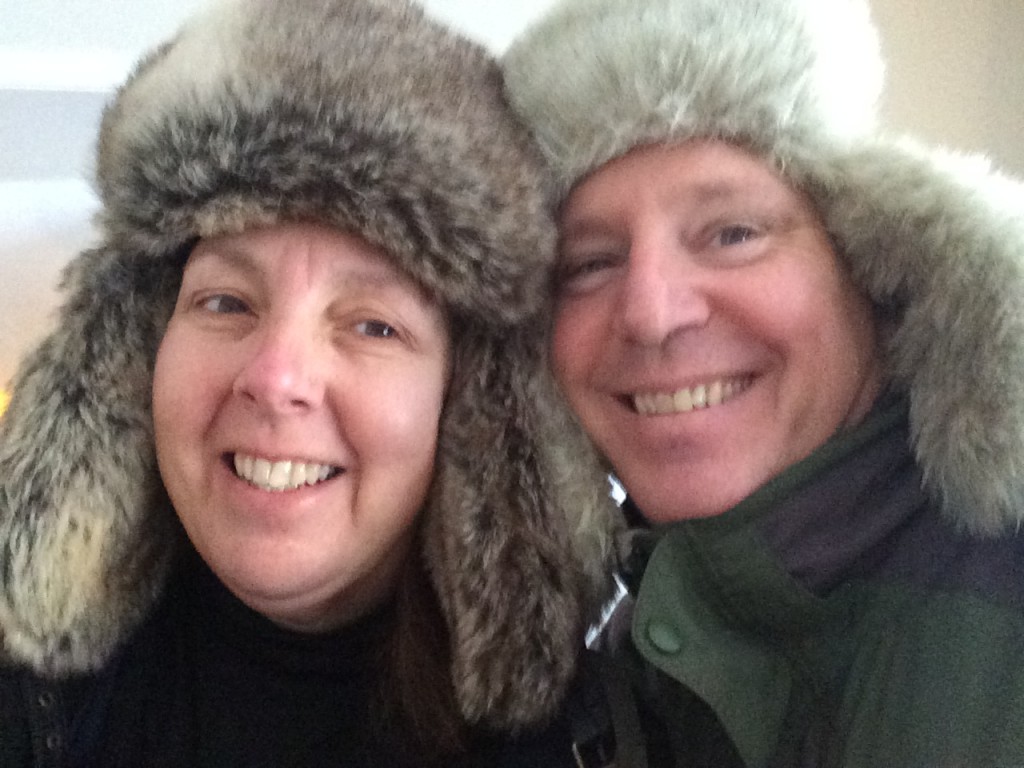 Try to ignore, the frown in the brow, lack of make-up, and fact that the eyebrows were last waxed just before Thanksgiving… and that is just on the Hubster…He knows I am only kidding.

Before I ventured to try on the snow pants, I was well aware that my yoga pants with wide leg opening were not going to squeeze into those pants, so I pulled out my snow leggings. This little pair of snow leggings suddenly had the look of something I may have purchased at Baby Gap years ago. I am not sure of the fabric content of the leggings, but the stretchability was something that would have impressed a balloon animal artist.

At last, the snow pants! A modern marvel in construction and the “Spanx” of Snow Gear. 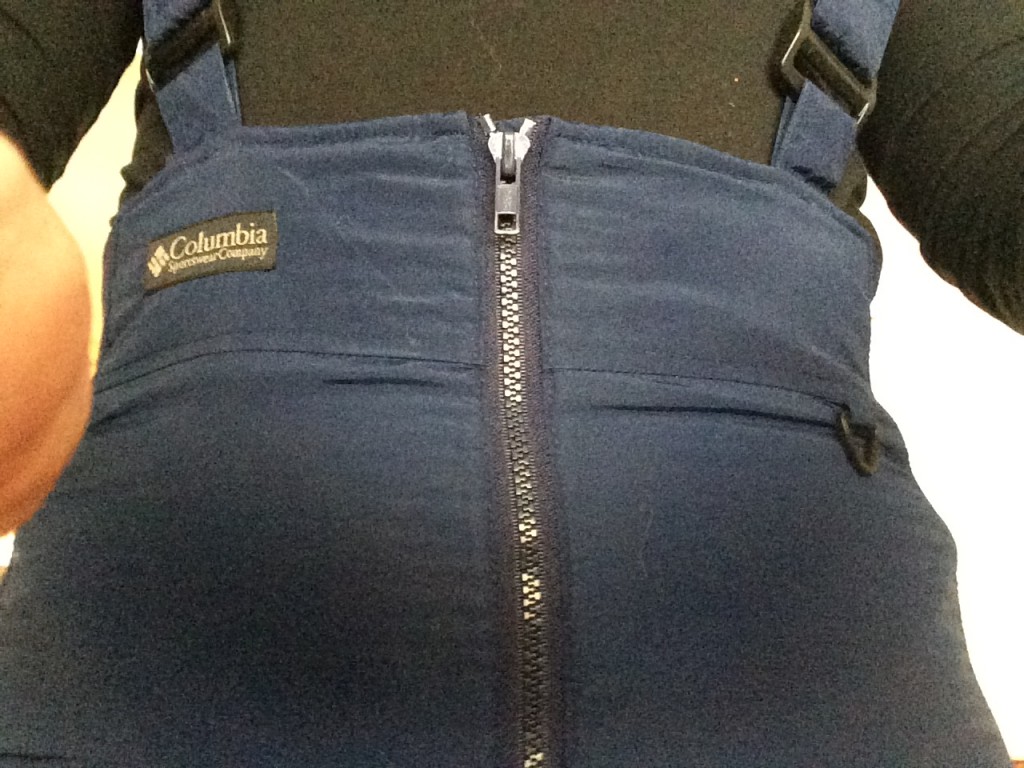 This photo is untouched and indeed my waist, breathing was not an option, but who needs to inhale when you are just thrilled to have pulled the zipper all the way to the top. As our local newscasters have said over and over, “This was one for the record books.”

Thank goodness photos do not have sound because I am fairly certain the seams on these snow pants were screaming, “Danger, something is going to blow!”

My body has delivered only two children. My mother delivered eight, now I know why she never wore snow pants, rushing to the bathroom in your young 50’s is a real challenge. Thank goodness there are points for technical difficulty.

It seems easy, but the struggle is real.

The zipper on extremely tight snow pants is more difficult to undo than this move above.

Will the snow blower start? 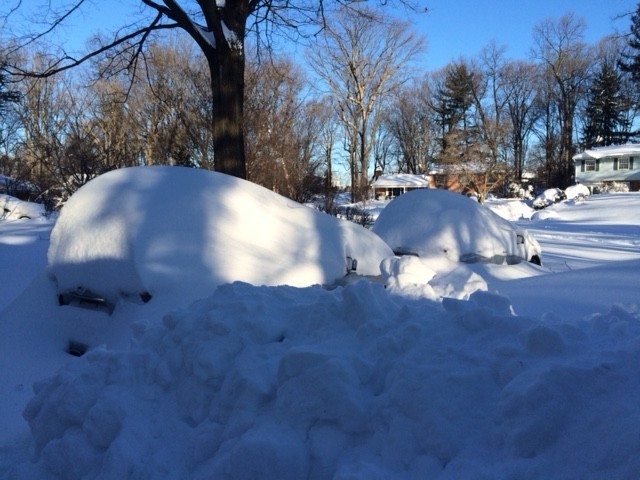 Those two cars were not going to shovel themselves.

Candle lighting  for a miracle was not appropriate as we were using gas.

Houston, we have lift-off… 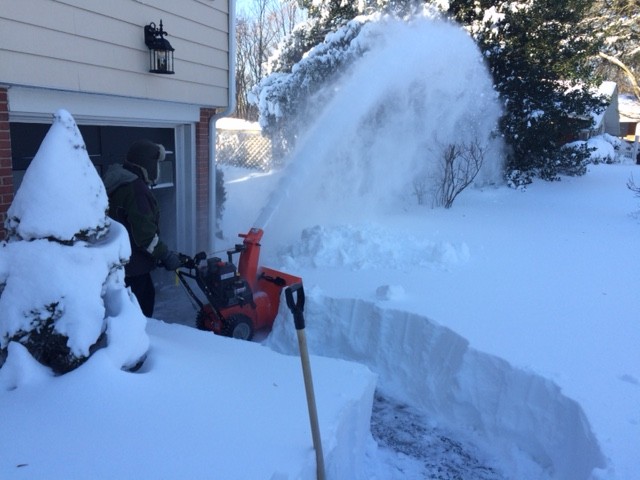 That spray of snow a beautiful sight…

The Sons-sters had been texting each other since Thursday about coordinating schedules to come shovel out the driveway, or perhaps it was us texting them about coming to shovel the driveway…all was well, they were able to relax in their own homes and not worry about us. Seriously, Son-sters, I had your Dad’s back… 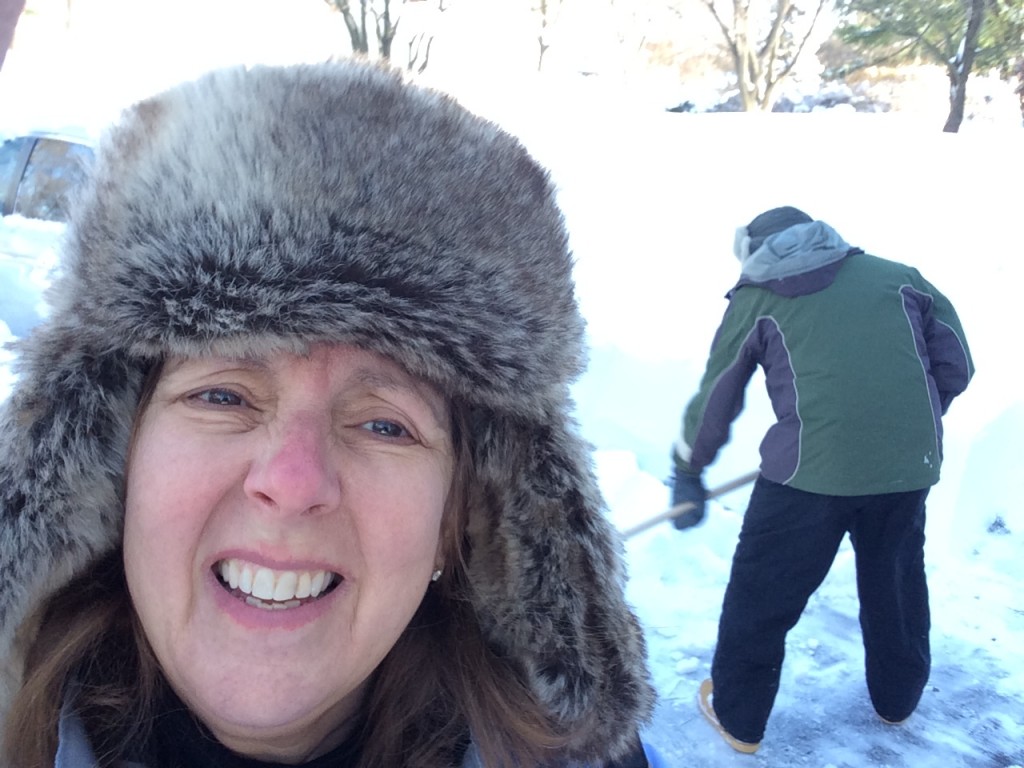 See what I mean about your Dad’s back…I was there….red nose courtesy of the cold.

Once the moral support and snow blowing of our own drive and walk way was complete…it was time to help the neighbors. 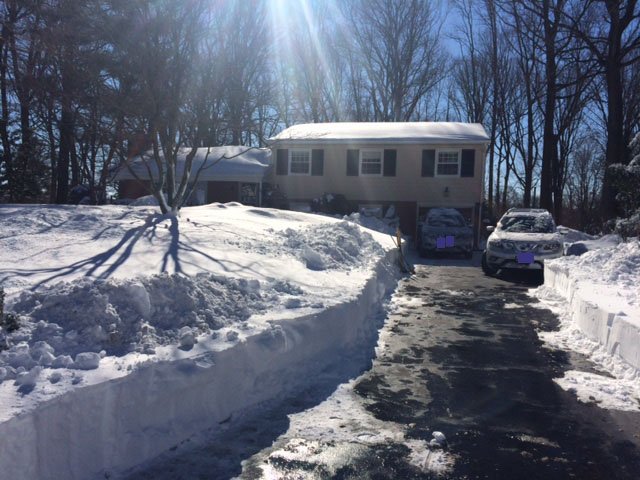 Hubster must make it down to the pavement or he thinks his job is not done…our driveway.

It seems the Hubster and our neighbor, Don*, were eager to help our new neighbor, Naomi*. She is a lovely, young nurse who lives between us and Don. On the day she moved in back in October, a large branch from the oak tree in front of her house fell on her hardtop convertible and crashed through the rear window of her car.  This was an unfortunate greeting to the new neighborhood, so all of us have been working hard to make her feel welcome. The men have especially been committed toward making Naomi feel welcome.

Hubster and Don coordinated snow blowers and worked diligently to clear her driveway. 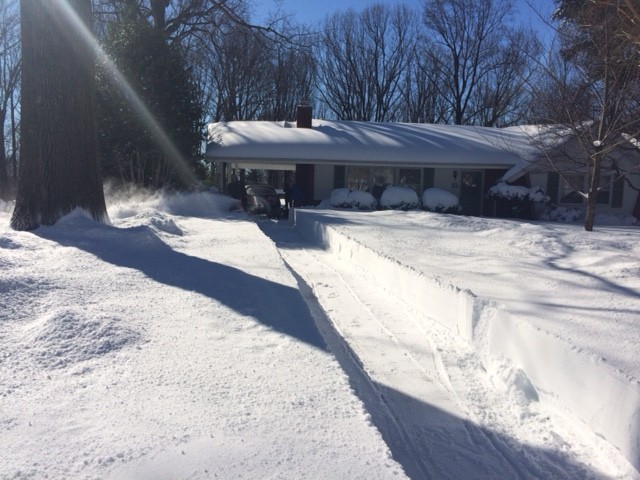 Almost finished..not sure where Don is in this photo, but Hubster is in the shadows.

When Hubster and Don were done, Don suggested an impromptu court party. There are eight houses on our court and we usually try to do this once per year. It never happened in 2015 because so many of us were traveling at different times, but we agreed no time like the present, especially since we had seen nary a county snow plow.

A photo toward the main entrance of the court. 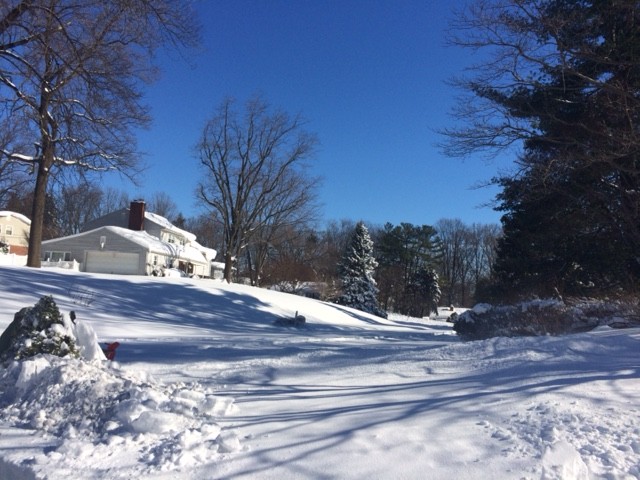 Don set up the party at the end of his driveway… 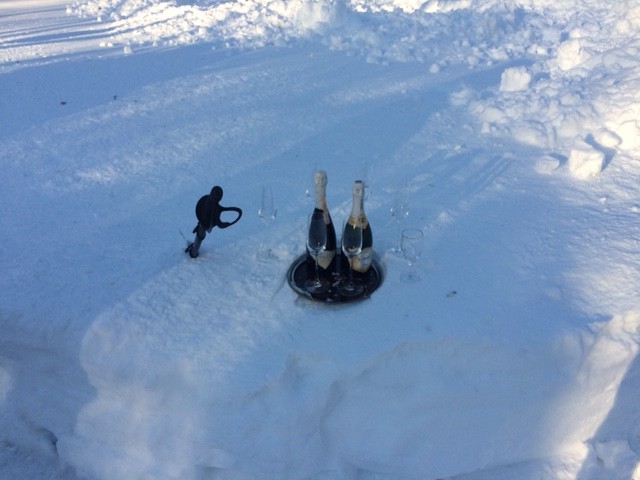 The dark item to the left is a Civil War sword.

Don and his wife, Tess, attended a wedding in Italy last summer. They witnessed a bottle of champagne being opened with a sword. At Christmas, with their son and his wife joining them, they tried this little “parlor trick” for themselves. Don was so impressed with the results that he insisted this would be how we open our champagne. Being “neighborly” and given we were all well prepared for the storm each of us brought a bottle as well.

Here is Don and his little “parlor trick”… 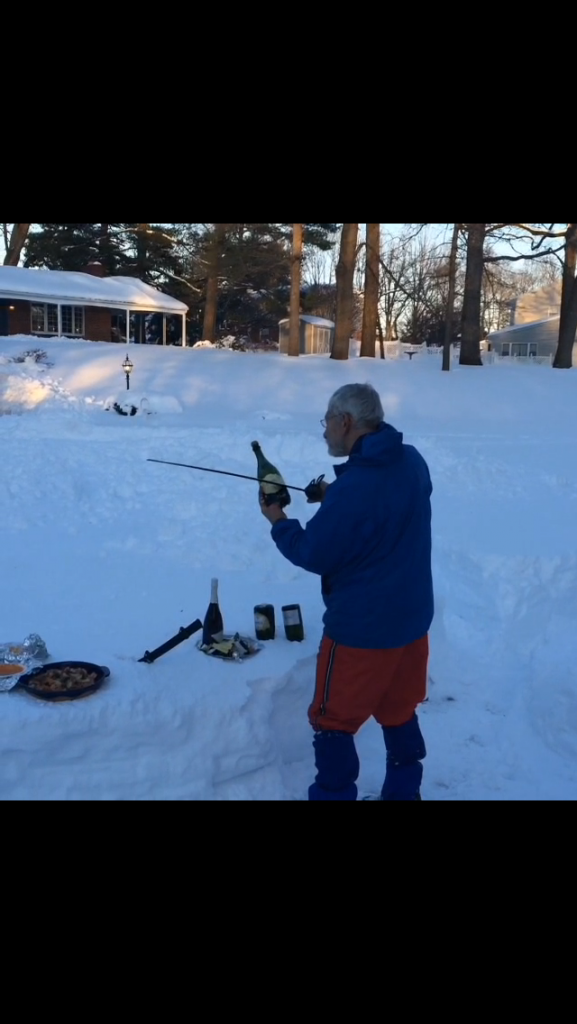 This was truly no “parlor trick”…I have a video, but can’t seem to upload it. When I can figure it out, you will witness this amazing feat…all 17 seconds.

A few of the neighbors… 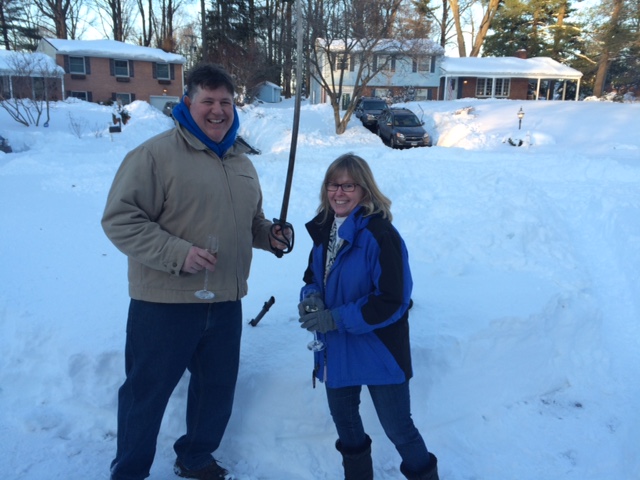 Blake* and Fiona*…their youngest attends college in South Carolina and the two older girls wanted no part of spending a weekend snowed in with the parents…hmm, much like our own Son-sters.

I didn’t get a photo of Don’s wife, Tess…sorry Tess. The other neighbors decided it was too cold to join us.

Look Son-sters, your parents know how to make  the best of our situation.

Thanks for grilling the shrimp Blake…delicious….just look at those Baby Gap snow leggings. 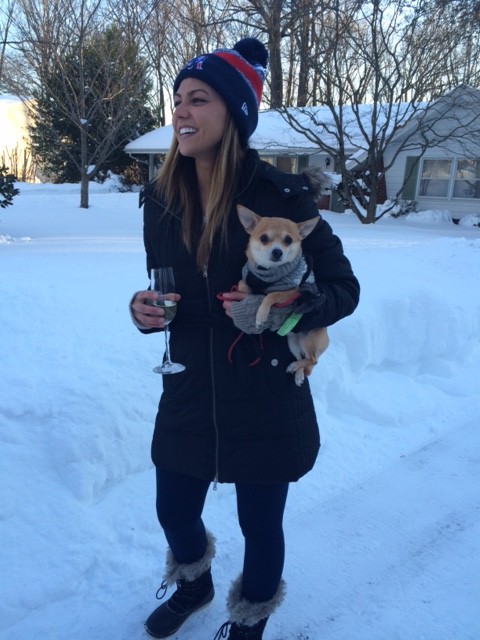 It seems that while we were outside enjoying the great outdoors..the Patriots lost. Sorry New England family members…there is always next year.

No school for me on Monday…the rest of the week to be determined.

* Names changed to protect the innocent…Todd was not concerned about his privacy.