…a sister and two brothers

At this rate, given the size of my family, I should be complete with Who’s Who Wednesday in 2016. That may be a bit of an exaggeration, but it seems we do go on forever.

Wearing sweater with the stripe.

She is my parents second child. I.T. has punctuation in her acronym because I don’t want her referred to as IT. She arrived just twelve months after the FM, thus the title.

I.T. was the inventor of the nicknames Keary and Beemie. I was none too thrilled with her spelling of Beamie, because it appeared too much like Beanie, which is what most of my siblings’ friends called me…quite annoying. I spent two summers of my youth with her when she lived in Indiana. Some great stories for another time. She has two sons (one is 7 feet tall), one daughter-in-law and two adorable grandchildren.

Heir in the light blue shirt …enjoying some heavy thinking with the KK.

He was my parents first son, thus his real title should be Heir; however if you are a frequent reader you know there were no silver spoons inserted after delivery from the womb. He is retired and lives in New Hampshire along the glorious shores of Lake Winnipesaukee.  He is a very generous brother and uncle. Before he made NH his permanent residence, we used to vacation at his fabulous home. Those were some “On Golden Pond, but without so much drama” summers when we traveled with our boys enjoying our own three F’s …Forced, Family, Fun. We were even lucky enough to enjoy a couple of ski trips over the winters. Son-sters, I know you still think it was pretty funny to let me ski down a black diamond without my knowledge…it may have been the first time they heard me utter a minor curse word. 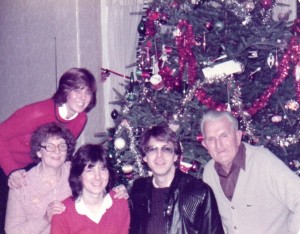 In the tinted glasses, very cool.

He is the middle child. He used to practice with his band in my parents front parlor in the late 60’s and early 70’s. My parents were so pleased that their good tuition money to BC High encouraged this kind of behavior. The music as well as his long hair, began to grow on him, on them, and all of us. The summer that Let it Be was popular; I actually believed he wrote the song because he used to practice it with his band for hours on end.  He owns a music studio in Boston and still plays piano at our family functions.

That’s it for today’s Who’s Who…enjoy your Wednesday.