As mentioned yesterday I am home from two weeks at the beach, some who know me are probably thinking, hasn’t she done this for the last several years. My response would be yes, but this year it was different. We didn’t rent our usual place because we planned a whole year in advance for the 3 F’s; Forced Family Fun visiting family in Massachusetts over July 4th  week. Also, the Son-sters announced many months ago they each have real jobs; limited, to no vacation time, and lives of their own…you know the usual twenty-something unspoken chant: our friends are our family; so we didn’t need the extra space for them or the entourages they bring with them over the course of our vacation.

Giving up our usual rental was tough, but informing my college roommate who usually vacations the same two weeks that we would not be there this year was to say the least…dramatic.

This was her reaction to the news:

Her hair is normally curly, but as you can see she was so upset it straightened her curls.

She was not listening to any of our budgeting excuses, Hubster’s time away from work nonsense, or our advice, “This might be good for you to enjoy time alone with your sons.” … Once both of us finished crying about discussing the beach activities we would be missing together such as comparing our sun spots, sucking in our stomachs when walking in a swimsuit and enjoying an occasional beverage; it was decided (she insisted) we stay with her. We also determined the amount of money we would save not having to visit a therapist because we are our own best therapists, could be invested in eating out, happy hour and a new slender line swimsuit from Land’s End…not that either of us really needed the slender line part of the swimsuit.

As Catholics we believe in miracles and the power of the spandex in this swimsuit. 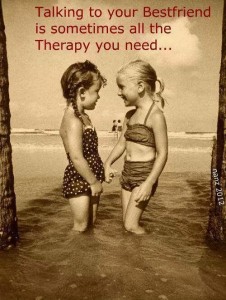 Found the Hubster and myself spending quality time with our friend of thirty-three years and Third Wheel (why Third Wheel, read here), Peggy Anne…. The Hubster and I built a few sandcastles while the Third Wheel supervised with the placement of each individual shell on our castle. I don’t plan on telling her this, but she sounded a little like her mother, Dorothy giving directives and lectures about making good choices from our college days.

Two of her sons made intermittent guest appearances on the beach and at the condo when they were hungry or in need of spending money. The Hubster is quite set in his empty nest ways when our Son-sters are not around. He quickly forgets that we had two sons on vacations who insisted on meals and funds in the wallet; although like Peggy Anne’s sons our Son-sters will tell you we didn’t have much sympathy for  empty wallet syndrome (EWS). The Hubster did teach her son, Jackson how to make a proper guacamole; he quickly became an indispensable member of the Dream Beach Team. Jackson is off to a college on the country roads of West Virginia this fall so this guacamole knowledge should make him quite a big man on campus. 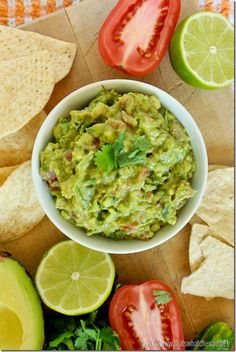 At the end of week one, the Hubster had to return to reality … if I am a guest of Peggy Anne someone has to earn a living in order for me to live like the rich and famous.

Of course I was still there because Peggy Anne could not live without me; also two of her sons Jackson & Kyle, and the boys’ friends; a crew of Vineyard Vines  fans who changed their shirts 18 times per day. I was beginning to think the duffel bags they had with them were actually clown cars. Jackson continued to make the delicious guacamole which Peggy Anne and I had to scramble to get a taste because suddenly hands of young people multiply when food is set out in front of them. I chipped my manicure when my index finger was mistaken for a Tostito. Trust me that hurt; I paid $25 for that gel manicure. 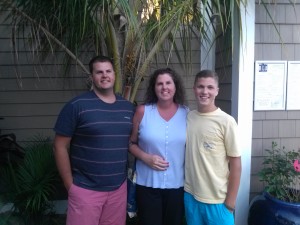 L-R: J, P A, K…this photo was actually taken during week one after eating crabs

12th shirt change of the day…classic button down.

Before the Tostito incident…too distressing to display after the Tostito…but I must say thank goodness their parents improved their overbites many years ago…it could have been much worse.

Some may think living with a posse of late high school and college aged Vineyard Vines models is challenging, but it definitely had its plusses. We were fortunate to have a front row to the ocean because this same crew no matter how late they stay up somehow manages to rise at the crack of dawn, determine the time of high tide (smart phones achieve much more than just social media), drag our umbrellas, chairs, beach tables, boogie boards, coolers, sand toys, and kitchen sink up to the beach and back at the end of the day. They insisted on this daily behavior because they knew we would not complain about being too tired to prepare caloric delicacies or wash the dishes when dietary needs were met.

On one of our last days on the beach, Peggy Anne was adamant we continue the tradition of having our Telescope photos taken on the beach.  A cute blonde, Kiley, a rising sophomore from Shippensburg University in Pennsylvania, sporting shorts from Baby Gap was our photographer. Fortunately, she chose the Vineyard Vines models to go first. There were several lay down in the sand poses mixed with jumping, flexing, and just generally looking good in their current state of youth.

Any one of the blondes could be Kiley

Youth…just looking at the agility was painful.

The crew encouraged us to go next. Kiley gave us a wink of an eye. Peggy Anne and I recognized this subtle message indicated that since we were two hot babes we might want to preserve the egos of the models and permit her to digitally “dress down” the photos of us so as not to  outshine. Kiley carried a side-saddle camera bag so she changed her lens to one labeled older and wiser. Based on the outcome below she was able to capture us by enhancing features we were unaware existed.

HUMBLE BRAG here: Do you see what I mean…she really manipulated the lens to make us look older and wider wiser?

Kiley will probably win an award for this photo.

On the last day, her sons and the Vineyard Vines models decided they needed a break from competing with our good looks so we went to the beach without them. In reality the solitude and the fact we could finally exhale provided a much-needed respite. We passed the day on the beach sitting in our chairs, thumbing through our magazines, shifting from sun to shade under a lone umbrella, people watching and connecting the dots of our sun spots.

Not our spots…but don’t look too close at the photo above.

More from the beach tomorrow… 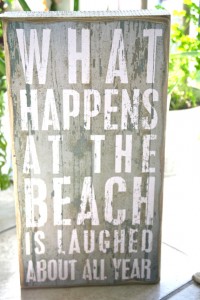