Hubster and I rose well before the crack of dawn on the day of departure a few weeks back because we needed to meet Peggy Anne at her house up in the wilds of Delaware. Once Hubster installed her bike rack by the dawns early light, we were ready to roll. 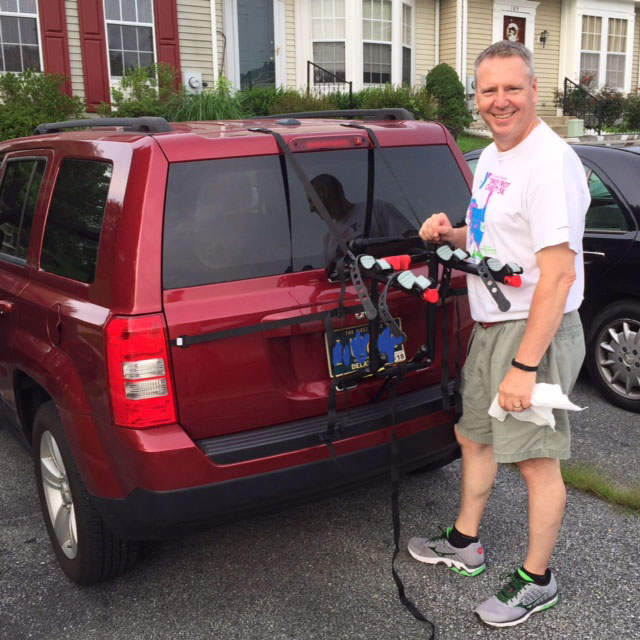 We stayed with Peggy Anne again because she can’t vacation without us. (We should probably start charging for our entertainment services, but then again we don’t want to press our luck.)

Peggy Anne’s tantrums do not always show her best side, although she too looks cute in gingham.

Bikes were an important component for this year’s two weeks because during our younger years living at the beach as hot college students disguised as waitresses we used to ride our bikes to and from work. We do everything in our power to park the car once we arrive and never drive for the whole vacation. Also, parking during some of the fishing tournaments makes it problematic because we have only one parking pass for the condo and four/five cars.

Hubster and I park our bikes side by side just before our morning ride. 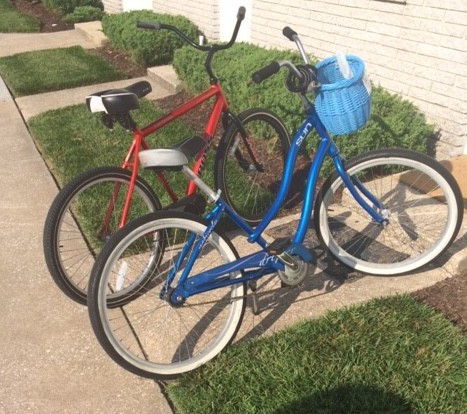 I managed to manipulate a cup holder from Dunkin’ Donuts to carry two hot coffees in that basket every morning.

Peggy Anne and I on a morning ride to the Ocean City inlet. 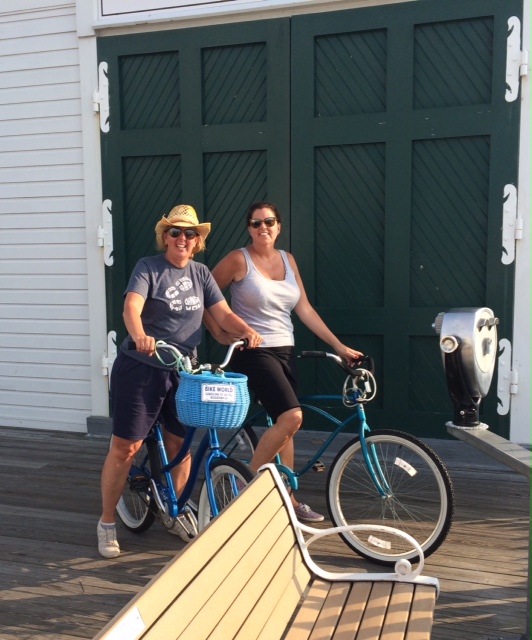 Once again, the iPhone adds 40 pounds to my body, The Third Wheel Club rides again.

There was plenty of sandcastle building to satisfy my artistic sculpting skills. Since I have been building sandcastles for years, Peggy Anne’s sons (Jackson & Kyle) have come to expect bigger and better every year.

Here are just some of the “shore” winners: 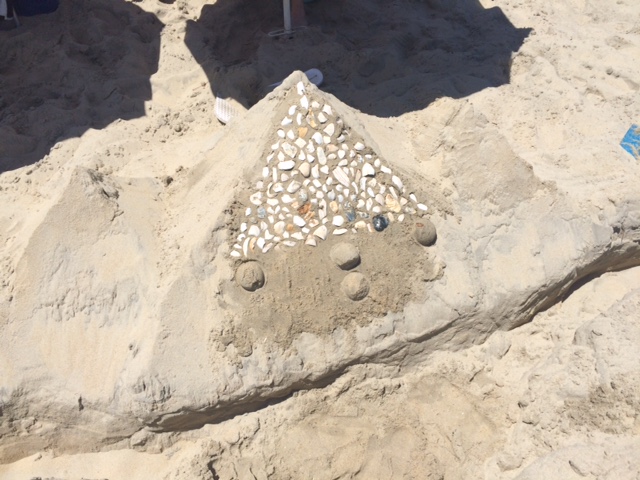 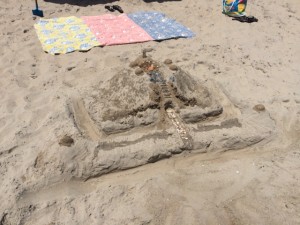 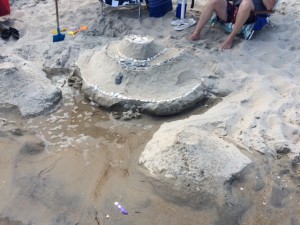 See you later Alligator or Izod on the Beach 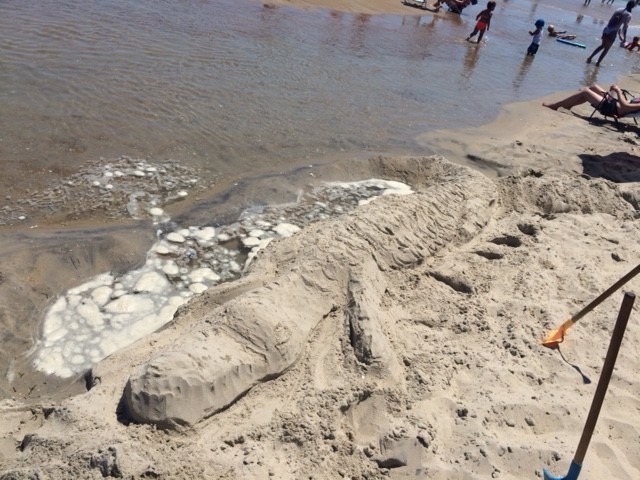 Peggy Anne’s son, Jackson noticed my sandcastles received tons of real-life “likes” on the beach. He decided that he needed to apprentice at sandcastle camp. My own Son-sters do not vacation with us at present, but I believe I have trained them in the art of sandcastle building so I feel qualified to mentor Jackson.

Also, I know that someday I will have to pass the shovel and I do not want to be associated with any lame sandcastles, so Jackson and I went to work. 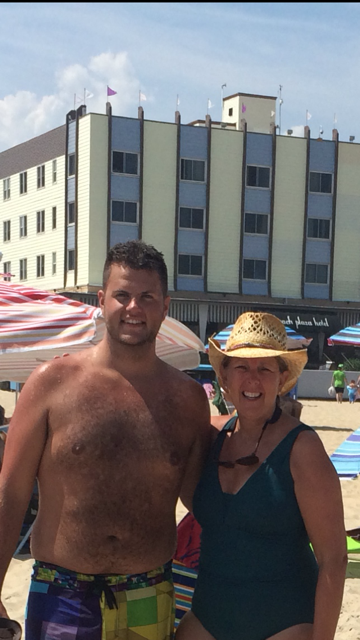 Jackson and I ready for his first lesson.

Jackson felt the need to go big in the sand, where as I wanted to employ the Karate Kid method of “wax on, wax off”.

Peggy Anne take notice at the amount of sand he shoveled…the next time he tries to tell you…  “Mom, snow shoveling is not my thing”, show him this photo.

The lad is a quick learner…no wonder he is doing so well at WVU.

Do you want to build a snowman?

Allergic to snow shoveling…I think not, dear Jackson. This castle received the most real-life “likes” of the vacation.

For the kids it is all about the “likes” so quickly realizing we had something going; Kyle, Peggy Anne’s recent high school grad and future UD Blue Hen jumped at the chance to be “liked” as well.

Jackson was quick to pass the shovel once he realized I may use his sand “shovel wielding” as evidence in the case of snow shoveling. Sorry Kyle I believe I have no actual photos of Jackson shoveling sand, but plenty of you. Expect a snow shovel for Christmas….”Youre welcome.”

Last sandcastle of the vacation: Octopus or Angry Sun? 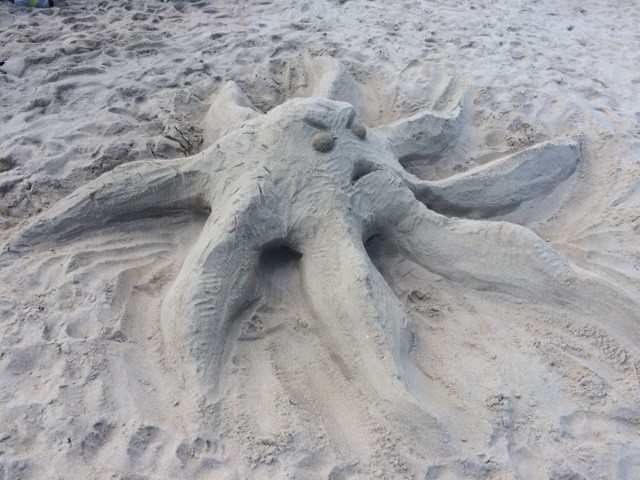 Enough from the beach for today…more later this week.