I am in the process of self-publishing a vanity hardcover version of my A Milkman’s Daughter (AMD) of the past year. As I edit through the mass of content I wrote over the last year I am discovering tons and tons of bloopers, blunders, and typos. So much for vanity; I may need a makeover.

The errors are not quite to the scale below, but enough that it makes me want to place my pony-tail between my legs and run home crying. 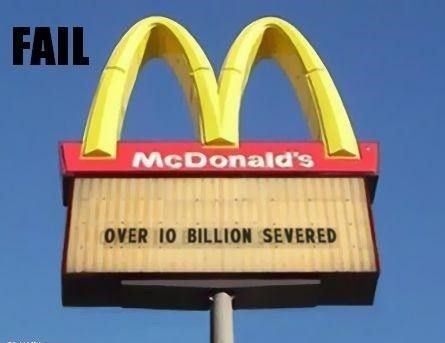 I am home…so running in circles is pointless.

While humans are not flawless and having never promised perfect grammar, spelling or punctuation; it is still a disappointment to come across such obvious gaffes in virtual black and white that I did not intentionally put into place. For the record, there are literary bloopers  in my content that were quite deliberate on my part.

Going forward, I ask your help. I do not want to end up like the poor souls on a three-hour tour. Oh, how they tried to get off the island, but to no avail due to this message blunder by the lovable Gilligan. They, like me, are left: (insert the three letters in image below)

I have to wonder if the editors/writers knew exactly what they were doing when this little scene made it into the show back in the 1960’s.

I appeal to you readers, if you think a word is missing or duplicated, a typo has occurred or it just doesn’t read like it should please let me know. If it is intended, I will thank you politely and go back to the business of educating the people who will care for us during our retirement years or if it’s summer; then I will get back to what ever I want.

My career as writer/storyteller/anecdotalist  began long before AMD.

As the first day of my summer vacation began last month,… I went down into the crawl space of our house; besides the countless spider webs, bug carcasses and old skis, I discovered:

1) I can still fit through the small hole that provides access to the space (I did bring a phone just in case I needed to call for emergency response to remove me from the tomb).

2) There were several boxes of cancelled checks (1990’s). (I was an at-home mom for 20 years, check writing was a fulltime career.)

3) A plastic container of mementos from my younger years. (This made me forget the real reason I went down to the crawl space in the first place.)

Hubster, the photo below demonstrates something we may want to consider once we get rid of the skis, clothes that no longer fit me (au revoir, size 8-10), and mysterious items in the five Rubbermaid containers with no label.

I am going to Pin this on a board called, “Life after Clutter”…after all Pinterest is the place you post things that  will never happen.

At that exact moment, hunched in the bowels of our home I made the decision to start a big summer paper reduction campaign (PRC). My little family knows you never get in my way when a PRC is in process as you may end up in the shredder or recycled. At the very least, an evil eye may be cast in your direction.

In the process of safely and securely ridding us of too many items with sensitive account numbers, etc. I ruined one paper shredder, bought a new triple deluxe paper shredder from Office Depot, made four trips to the recycling center, and attempted to plunk down $20 for bulk shredding at an office store that simply wanted me to place my classified documents in a locked container only to be sent off to some remote locale for secret emulsification.

Hello, I have watched House of Cards, you never leave a paper trail.

Frank Underwood, my idol in covert affairs….actually he frightens me, but  I like to “keep my enemies closer”.

We are now free of our classified documents after I sweet-talked the clerk into permitting me to watch him shred the last 10 pounds.

After this little task was completed, I rewarded myself by opening the container of mementos. As I  cracked the lid the voices of my youth began to giggle, shout and sing in three-part harmony. The scrapbook I created, the yearbooks on which I served as staff, love notes & cards from Hubster, graduation tassels, employee handbook from Phillips Crab House, post cards, an essay, school musical programs, art fair ribbons, collages and two copies of the high school newspaper. I was the editor of one of those newspapers.

Try not be too impressed…as I began to read the paper, right next to my name prominently printed in black and white on page two, were grammar, spelling and punctuation errors. The noun/verb disagreement, blatantly evident and no one to blame for the altercation, but me. I suppose I cannot take credit for the typos, as clearly it is mentioned in the school newspaper that credit for the typing went to Sister Evangelina’s* period D class. As we were all minors at the time; I suppose all is forgiven,  but you won’t find me popping out to Home Goods for a proper frame for this piece of yellowing journalism; rather I will reopen the PRC I just completed. On second thought… I may need to burn it, thanks Frank Underwood.

I was not a part of the rear copy which was professionally printed the year before I became editor. It is the front copy which was one of two issues printed the year I was editor. You may note a difference in the quality and look as the good Sisters determined that the school mimeograph machine was more cost-effective.  The second edition that year was recalled as the SSND’s felt there was an article that was not Christian-like thus “freedom of the press” did not apply.

Another work of my written past was a “free choice” essay I wrote in a rigorous sophomore English/Language Arts class. Just to clarify the definition of “free choice”; in Catholic school meant “pre-approved topic”.  Given this essay was not typed I had no worries of typos and only one minor grammar error. I feel fairly certain the reason I saved this item was  the fact that I received an A and an agreeable handwritten comment from Sister. Notice the first three letters in the opening paragraph…I wrote a blog post last year titled: UFO… a very different theme 36 years later. Who knew?

Do you see that A? …It was written by the late chief inspector of the United States English Language Police…Sister Mary Martin,** SSND. 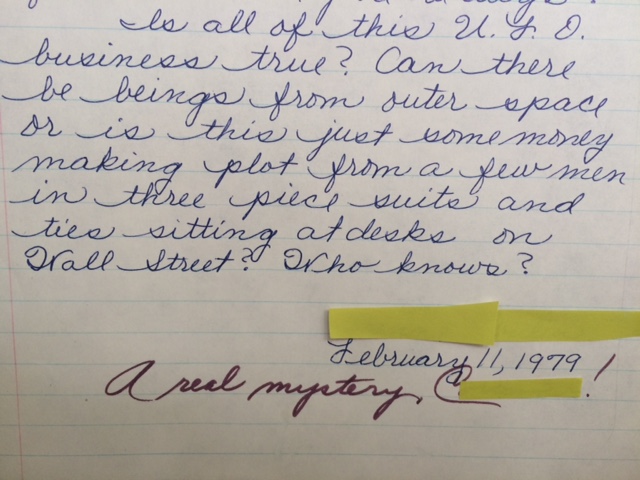 It seems I was a bit of a conspiracy theorist in those days. Look at the comment! Sister Mary Martin retired that year, not a shake to her hand.

As I conclude this walk down Literacy Lane (or if you are still reading this….another post, “All about Me”), remember; while it does state on my About page to put down your grammar police badge, it doesn’t mean:

A woman without her man is nothing.

A woman, without her man, is nothing.

A woman: without her, man is nothing.

It means: A woman: with or without spell and grammar check, shift happens.

It’s all in how you write and right, a wrong.

** actual name…Her habit was her protection and no, she never played Peter Pan on Broadway.