… in the sandcastle challenge.

During the recent July 4 celebebration with the Family Matriarch (FM) and Kitchen King (KK) I was tapped by one of my nephews to join him in the Annual Beach Sandcastle Competition. It seems that while Jake* is only 8 and not a frequent reader of my blog, he was able to determine that I, his “Greatest” Auntie was up for the challenge.

Please recall that July 4th competition started at a young age for me. (read here) You may also remember that I continue to build sandcastles on all of my beach vacations. 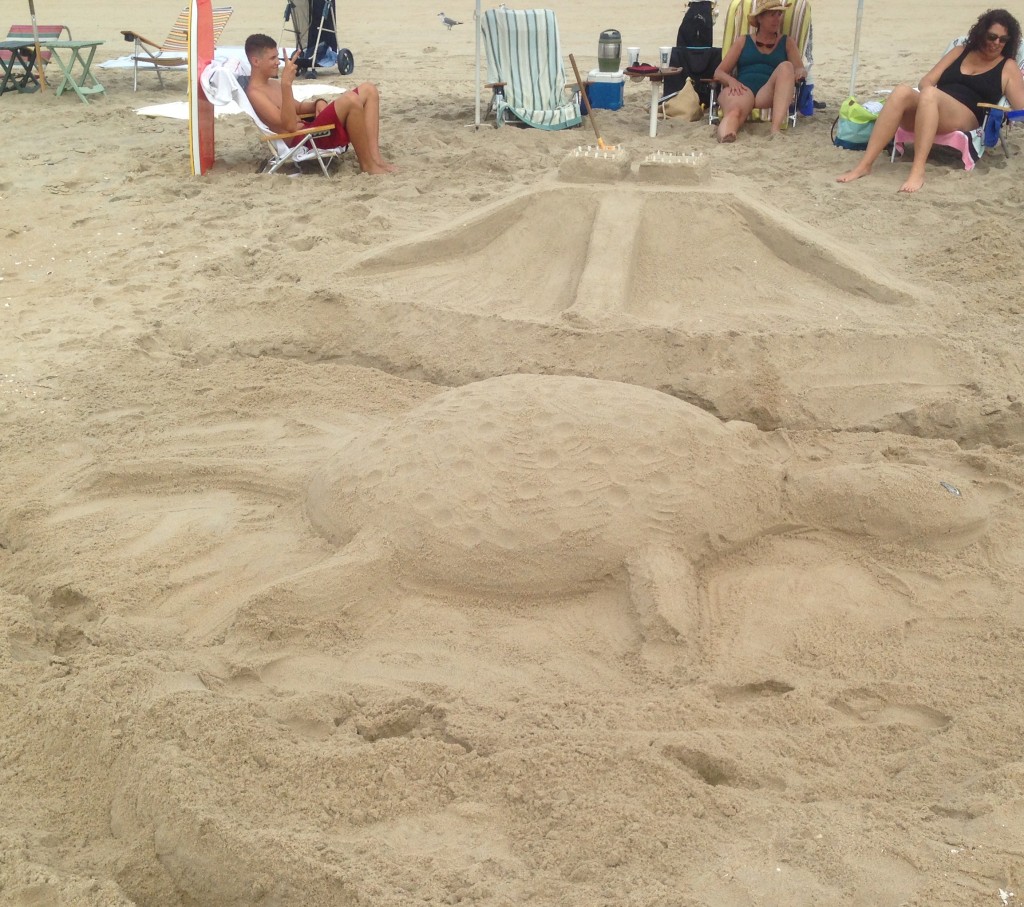 Some of the castles from my resume.

Sometimes the tide just down the steps from the the FM’s and KK’s house brings in a significant amount of rocks, so with less sand to work with during high tide I decided if you can’t beat ’em, join ’em. I enlisted the help of the great-nephews and great-niece to create this patriotic rock formation. 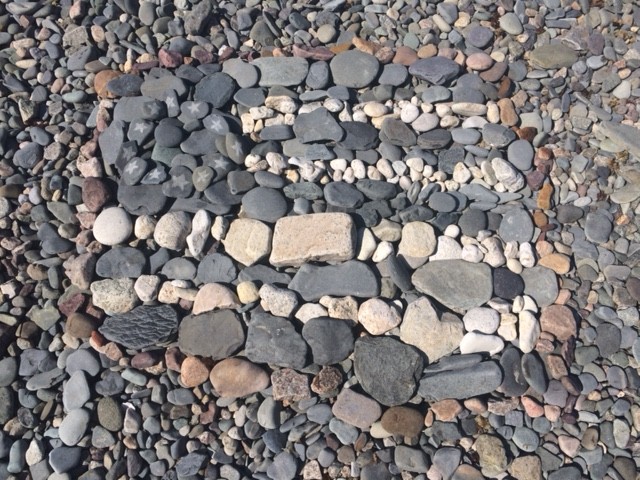 My great-niece, Scarlett* said that next year we will look for more red rocks (like the rocks that outline the flag) to make the red stripes. Great-nephew, Brendan* thought it looked a bit “warped”. Next year, we will use a T-square. The flag stayed in place for four days…impressive.

Interestingly, it was fun to watch people walking along the beach, stop, look down, and respect the flag by walking around it. It also helped that we shouted when people got too close…”Hey, watch the flag!”

Back to the competition… the kids were eager to be part of the contest so they actually gathered and made a plan before heading down to the sandy beach at low tide. Unfortunately, there was some artistic disagreement among siblings, cousins, and neighbor friends. That was when Jake* tapped me to join him in the competition. Knowing my experience with sea turtle sculpture, Jake decided we would  indeed build a sea turtle.

There were plenty of sand toys to go around, but we were not about to attempt winning without the proper tools, afterall we didn’t want to look like amateurs. 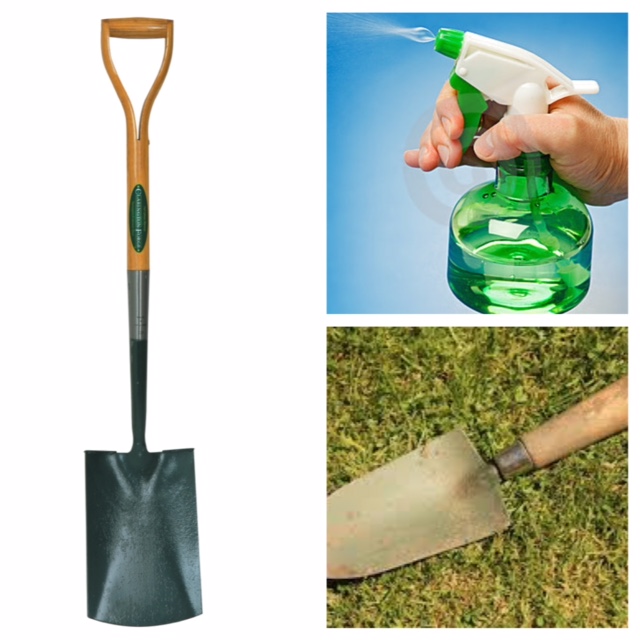 Once down on the beach; we quickly spied the coveted Sandcastle Loving Cup. 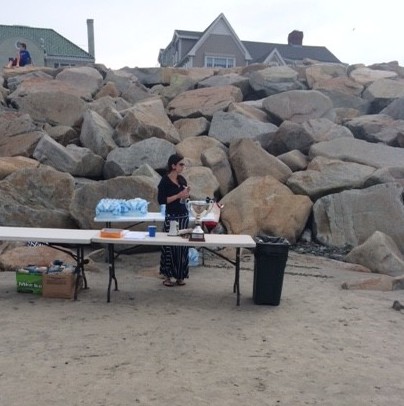 Keeping watch over the Sandcastle Cup 2015.

Jake had a change of heart once he eyed the cup, he determined that a sea turtle would not cut it in the Natural Habitat Category. He decided we needed to go whale…as in Vineyard Vines Whale…Jake recognizes a classic design is difficult to beat. 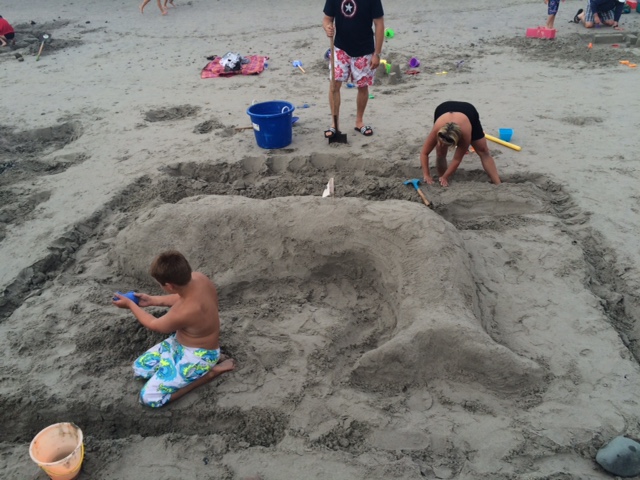 Jake perfecting the water spurting from the blowhole. His mother Patience* helping with the waves the whale is creating…His dad, my nephew, Jay* holding the shovel as the majority of heavy lifting was complete.

My lovely niece, Cee* smoothing out the moat, her fiance, Brad* in the hat standing behind her replenshing the beverages for the adult team members, and my great-nephew, Link* who was in the process of defecting from Team Cousins due to creative disparity.

At this point, you are probably wondering why you don’t see many photos of me. The reason, someone had to be the general contractor, so they chose the older and wiser, Greatest Auntie, me. Also, in order to have a leg up on the competition I had to covertly walk along the beach to size up the other sandcastles.

Some of the competition and believe me, it was pretty competitive:

A kid only effort.

They were building the Lost City of Atlantis…L-R: great-nephews, Brendan*, Link*, and Joshua*…photo taken prior to Link abandoning the team…something about symmetry being ignored in the imagining of the Lost City. We tried to tell him to mend fences as this is how the Beatles broke up. His response, “Who are the Beatles?”  Missing from this photo is Scarlett, and another great nephew, Mason.* Technically, at nearly the age of three, Mason was part of the destruction crew so his dad had to keep him on a short leash…no worries, figuratively on a leash. 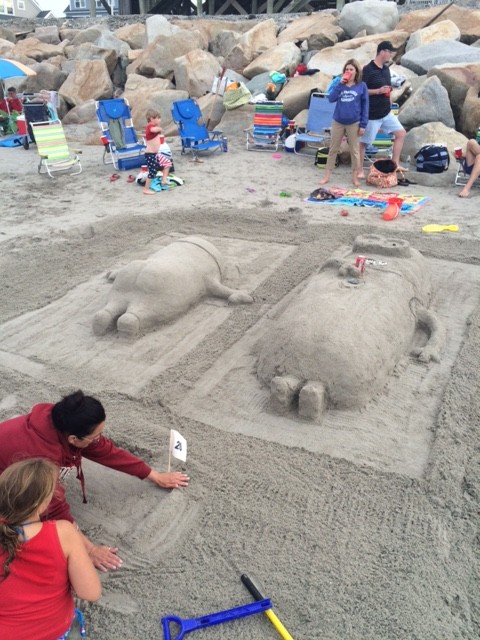 I believe this was the runner-up in the Natural Habitat Category. Once again the employment of a rake in the sandscaping makes a huge difference. The winner in this category was JAWS…I do not have a photo, but the shark indeed required a “bigger boat”. The team employed the use of child labor on surf boards and boogie boards laying on the sand and screaming around it. I didn’t know we could use kids as props, we had a school bus full…again next year. 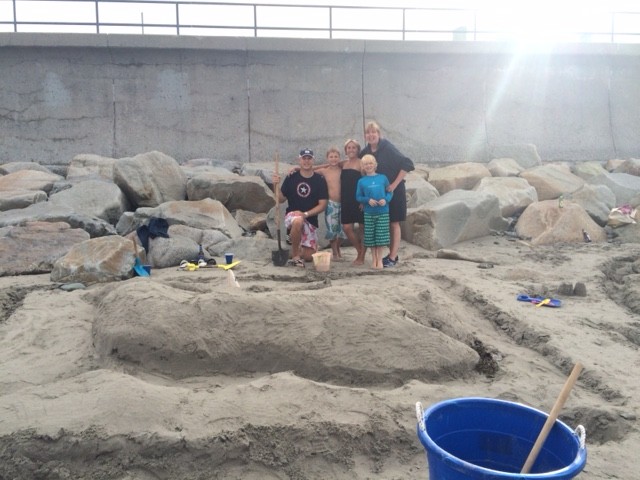 L-R: Jay, Jake, Patience, Link, and me, the Greatest Auntie (they seroiusly call me this name..ok sometimes they shorten it and just say “Greatest”)

I am not sure you can tell that this is a whale from this photo and others who were walking along to admire our effigy were also having difficulty, at times calling it a mermaid. Jake was getting quite upset that people were misidentifying his sand sculpture as mermaid. Finally, as we were sitting on the rocks behind the whale waiting for the judges to determine our third place runner-up medal winning creation in the Natural Habitat Category, a couple of girls walked by and said, “Oh it’s the Vineyard Vines Whale.”

Jake was so excited that they recognized it was a whale he screamed to them, “You’re right, you’re right…it’s a whale.” Fortunately, this declaration by the two girls was victory enough for him.

Shortly after the photo above was taken Link and I had to  part ways with the team as he was freezing have jumped into the Atlantic to rinse off the watermelon on his shirt that a random beach family “shared” with him.

I am certainly glad that we went back early because while we were laboriusly toiling the time away in Sandcastle Challenge (three hours in the sands of time), back at the house…this was happening: 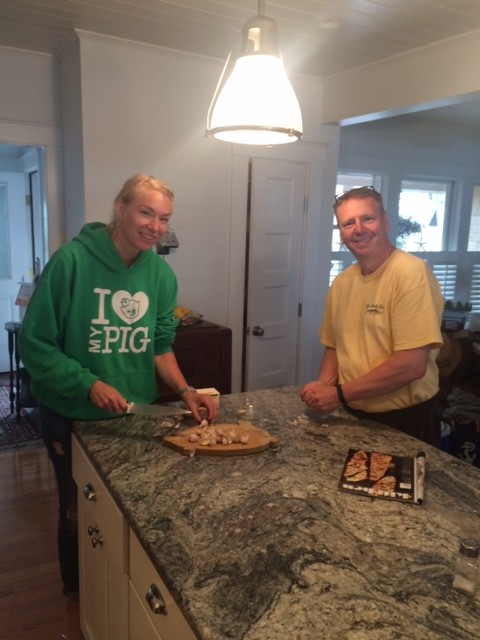 There is no photo of the actual scrumptious garlic bread because when 18 people are hungry, you don’t want to end up a feature news story between the fireworks injury recaps and lastest  shark attacks having lost a digit due to diligent family noshing. According to the KK no one has lost a finger in 37 years of owning the beach house and serving meals. Stellar record, we intend to keep.

In case you are wondering, it is true what that say about garlic and gastroinstestinal reflux…best to avoid…I wasn’t going to have a good night’s sleep anyway due to the all night fireworks on the beach. It was worth it.

Neither of our teams came home with the Sandcastle Loving Cup, but our consolation prize for our effort: 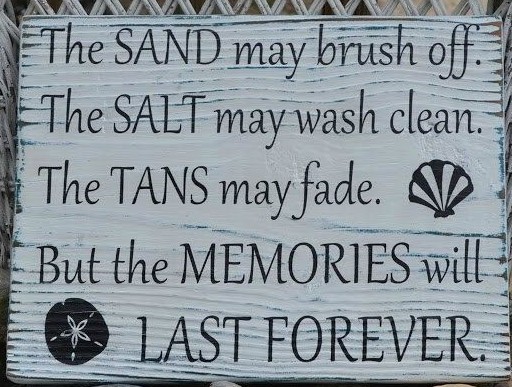 Team meetings for next year’s challenge will begin in February, time and date TBD…start gathering the tools now and for the love of my membership in the PLS-CBA (Professional Leisure Sand-Castle Building Association) please bring your blueprints. 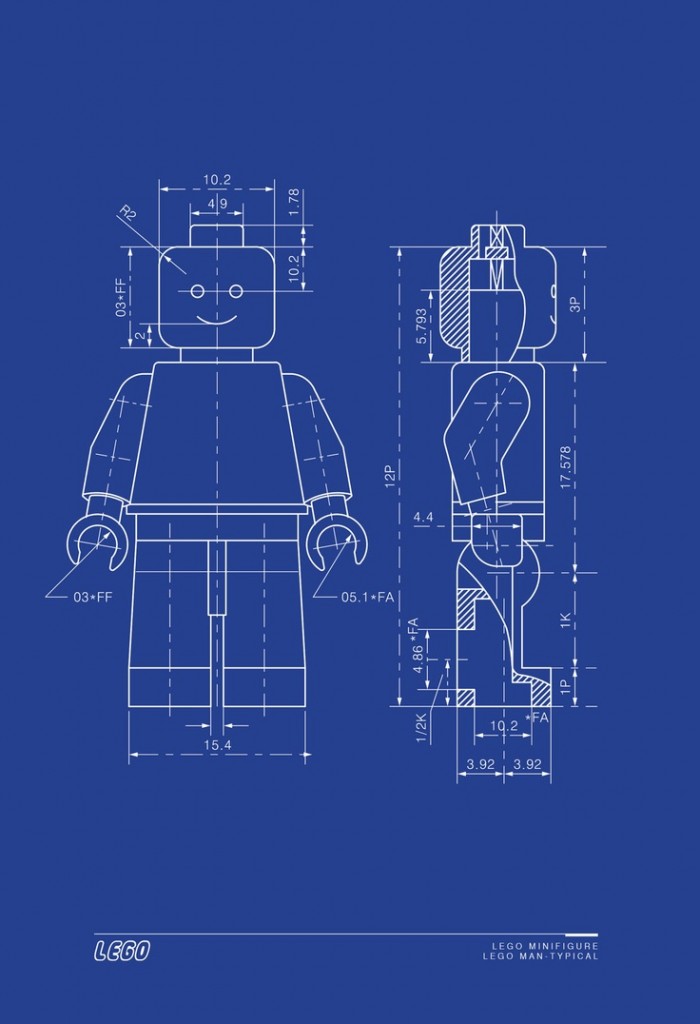 Leslie and Hubster, feel free to make the garlic bread…time heals all heartburn.

PS: Stay tuned in the coming days still more from the sandy shores of time spent with family.