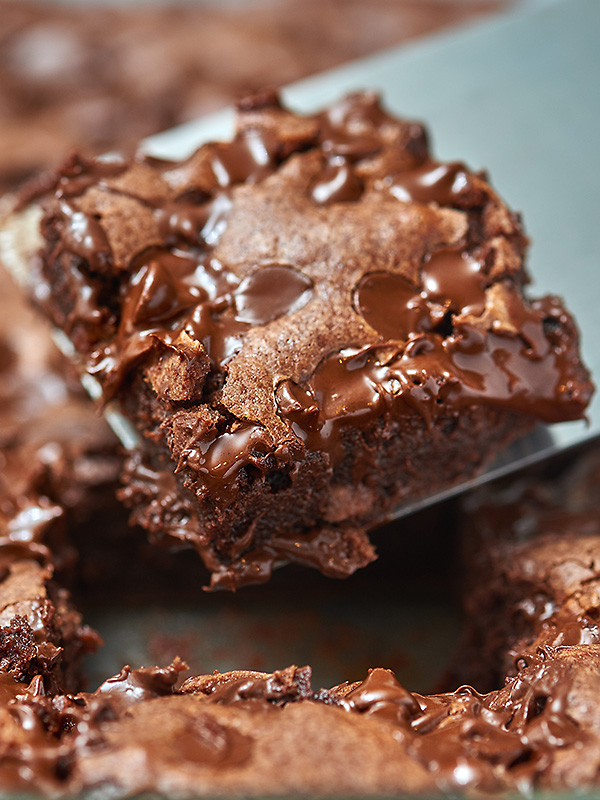 I can’t take credit for these brownies…here is the credit where credit is due.

I do not bake brownies from scratch…rather semi-scratch…I use a box mix…, Pillsbury, Betty Crocker, Duncan Hines, Ghiradelli…I am a non-denominational brownie baker, all brands are welcome.

If I am truthful and of course, I believe that is the best policy, I have not baked brownies in months because the aforementioned hips and thighs no longer believed they could fit into the clothing I currently own. Something had to change and my wardrobe decided it had to be me. So the brownies went unbaked for months …since March 19, 2015…not that I was keeping track of the exact date, but the memory of a last baked brownie is vivid.

Needless to say, I missed the brownie…once in a while I would sneak a rogue chocolate chip or Hershey Miniature Special Dark, but it just wasn’t the same. I rode my recumbent bike, I ate better (or at least I told myself I did), and  lo and behold my clothes are starting to win again. It is a small victory so I won’t gloat nor will I scream “victory”, but I decided to make brownies…I know it seems defeatist, but the reality was Peggy Anne had come for a weekend stay so I thought, “What the heck, I’m making brownies.”

Well this lapse in brownie baking caused me to sabotage my own wonderful brownies. I overbaked by 17 minutes…if you know anything about brownie baking that is like baking brownie croutons. Since there was no salvaging this batch and I refused to serve in a salad; Hubster, Peggy Anne and I stood by the pan after I removed it from the oven and scooped quick portions of piping hot overbaked brownie still soft enough to eat. I must say it seemed delicious, but because the roof of my mouth and tongue were left blistered and I tasted nothing for the rest of the weekend it was not worth it.

I am having my teaching team over this evening for crabs, corn, camaraderie, beverage, and brownie. I have baked and timed appropriately and thus far one hour after baking have yet to dig in.

I have to fit into my white Talbot capris.

Not Talbots, not me and I will not wear the wedges…I want to be comfortable.

The Brownies …with special ingredient

Look at the special ingredient…made for salads…maybe the brownie crouton is not too far off.

White Capris come with expanding waste band, just unbutton…can’t do anything about the hips and thighs.