How did he know?

Father’s Day is upon us again. For the last eleven years, I have not had to concern myself with looking for a card or purchasing a gift for the man I called, Dad…the Milkman. For some who do not like the obligation that some holidays may bring then I suppose this would mean less work. For me, it means another year of reflecting upon the fortunes represented by the dash between the year of his birth and his death.

Fortune for most is assumed to represent wealth, opulence and prosperity. For others, fortune is counted in luck, destiny, and choice. The latter fortune would be the fortune I speak of for my Dad. I feel certain he did not think he was lucky when at about the age of five his mother gave birth to his last sibling, a baby girl, Gabrielle. Roseanna, his mother suffered severe post-partum depression, called melancholia back in 1924. She had four children before the birth of Gabrielle and with each birth the symptoms worsened.

As devout Catholics, Borromee and Roseanna (my grandparents) felt that children were a blessing and believed God would care for their family even with this affliction. Unfortunately, for Roseanna, she was admitted to a sanatorium immediately after the birth of Gabrielle. Within two weeks she passed away due to complication in treatment meant to cure her and send her home to her family.

The family photograph in sepia tone taken during the time of Roseanna’s funeral stands a small boy with blonde bowl cut hair and short pants clinging to the leg of his father. That boy is my father, J.M.  He is the only child in the photo. I have often wondered if this boy sensed the permanent separation from his mother would somehow bring about a parting with his father. J.M. was afraid to let go.

My father leaning on and holding his father’s leg, my grandfather’s siblings…my great-grandparents center…funeral photo

As destiny would have it, the young boy was correct. Borromee, his father could not care for five young children alone. Therese, Claudette* (his two older sisters) and my father were sent to live in Saint Joseph’s Orphanage in Fall River, Massachusetts. His two-year-old brother, Marc and the newborn, Gabrielle were taken in by family in Canada. He may have considered it lucky that he had his two sisters with him, but girls and boys were educated and lived apart during most of the week.

Within a few years, Borromee, remarried.  C. was his new wife. I can only imagine the scandal that must have been created in the extended family when the children were not brought back into the home. I don’t know if C. stated to her husband that she would or could not care for them or if life without the once blessed children was now just easier for my grandfather, but the children did not return to the home to live as a family. My father’s two younger siblings were raised by family in Canada.

A rare Sunday visit to the orphanage…the children stand with their step-mother. While I know early photography required the subjects to stand quite still…I sense no “loving feeling” from this image.

When I was born my parents gave me C.’s  name, I love my name and never questioned why I was her namesake; although truth be told around the age of six, I wished my name was Tina. This infatuation with the other name was short-lived. Perhaps my parents thought that by giving me her name this would repair the wounds that were so deeply cut. The Family Matriarch told me she suggested the name to my parents.

Through their many courting letters during World War II, my parents do mention some of the strife caused in my father’s young life, but surprisingly he wrote about being there to offer a helping hand to his father and step-mother if they needed it.

I have no memory of my grandfather as he died six months after my birth, but I hold in my possession artifacts of his connection to me,  photographs, a card signed by him congratulating my parents on my birth and a copy of his will. In case you’re wondering, a huge inheritance was not claimed.

My father’s step-mother, C., lived for about ten years after the death of my grandfather. About once a month on a Sunday, my father would ask me if I wanted to go for a drive. I was a child, so of course, I joined him. Our destination was a Catholic nursing home about an hour drive from Boston, just over the Massachusetts border in Rhode Island. I did not know the family history at the time…I thought she was my grandmother. He dutifully visited this woman even though she had never invited him to live in her home.

Since my father seemed to have no role model to be the fabulous father he was; I have often questioned, “How did he know how to be a father?”

My father made choices. He chose to marry my mother and accept the blessings of children. He loved all the babies; although I came to understand from my mother later in my life that with each pregnancy (there were eight of full-term) he was debilitated with anxiety for fear that something grave would happen to my mother when she gave birth. Birth was in God’s hands and he agonized that history would repeat the difficulties of his youth on his fortune. Looking at photos of our childhoods you could not guess that this man was nothing, but thrilled with his brood. 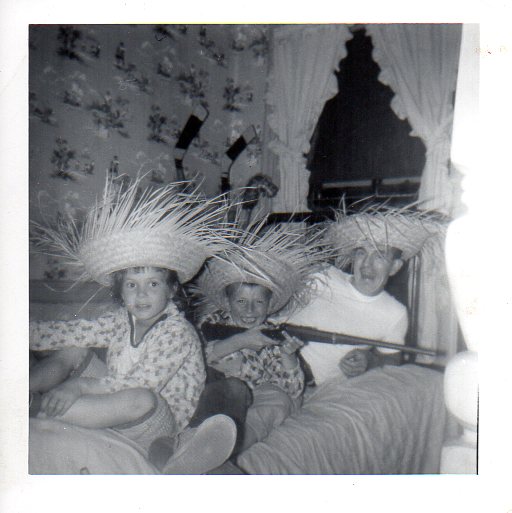 After a long day of delivering milk, he still had time to play… L-R: Keary, Baby Boy, and the Milkman.

He loved the babies… 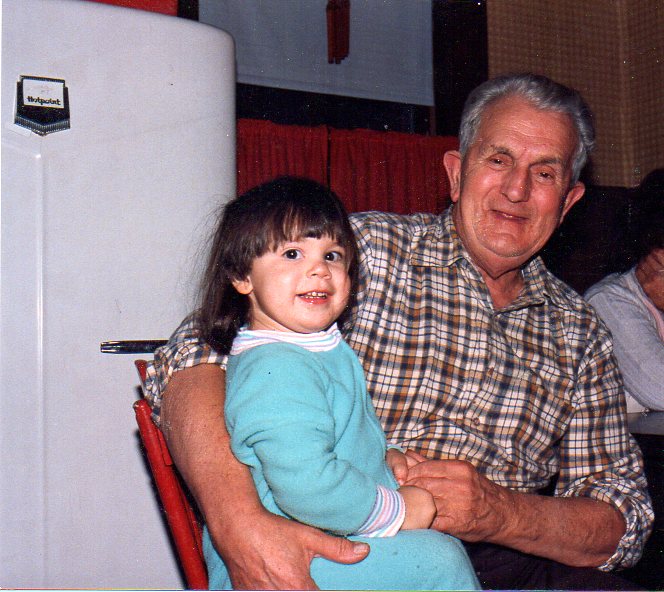 The babies loved him…with my niece about 28 years ago, today she is a nurse and Army major.

His heart must have been of gigantic proportions as it endured many a happy and sad occasion over the years. Heart disease would try to chip away at his fortune for the last 25 years of his life, but somehow he always had more of his heart to give. Even at age 82 when his leg was amputated, he learned to walk again in order to witness milestones for his children, grandchildren and the birth of his first great-grandchild and namesake.

I am rich for having him. He and my mother were married for 59 years before his death. Through some financial wizardry on a milkman’s salary and endless summer evenings painting classrooms at our parish school, we were afforded a Catholic education. There were school supplies and tired nights spent at the kitchen table monitoring our progress with homework, though he had only an eighth-grade education. He was our king of math, spelling, grammar, and penmanship.

Many Sundays, after church and dinner, he often chauffeured us on the long drive out to Grafton where his sister, Claudette lived with her husband, Uncle William* and their seven children. We played endless games of hide and seek with our cousins until dark.

In the summer, Canada was our destination via our wood side-paneled station wagon (seat belts and air conditioning, not included) where we met every aunt, uncle and 5th cousin twice removed. Thanks to our Uncle Marc, his brother the Monsignor, we stayed in “luxurious” empty seminaries and attended daily Mass or prayer at each Catholic Church, shrine or cemetery along the byways of the Province of Quebec.  This man who did not have much contact with his extended family or his brother through his young life made certain that family would be our reward.

The Milkman and my Uncle William chatting on one of our visits out to their home along the Blackstone River, in Grafton. Uncle William was also a WWII veteran…wore army boots until his death…my mother told me he was a driver for General Patton…I have no way to verify this, but Uncle’s demeanor makes me believe this was true.

A favorite shrine in Canada…Sainte–Anne–de–Beaupré

The black and white photo circa 1961 and color circa 1971. We did “throwbacks” long before it was popular.

You could say he was our #1 fan even without club level seats to our many recitals, plays, sporting events, or graduations. He played with us, shoveled snow alongside us, and drove us to our many jobs at least 15 minutes prior to our scheduled shift no matter the hour of day. Through example, he taught us excellent work ethic, honesty, compassion, and charity.

A role model for excellent behavior and thanks to my mother always dapper at a family get together.

As the last child to live at home with him, I watched as my older brothers and sisters moved toward greener pastures of independence. My father silently cheered this lifetime passage while my mother loudly ached at her empty nest. Monetary wealth would not be counted in his fortune, but family three generations strong continue to grow and still I marvel, “How did he know?”

Loving and missing my Dad on Father’s Day and forever.

This Father’s Day my fortune is counted in the past, the present with my wonderful husband (the Hubster) and great Dad to our Son-sters, and in the future for many Father’s Days to come.

A Father’s Day…Son-ster #1, scared out of his mind…me, screaming just to hear myself, …Son-ster #2, has never met a roller coaster he didn’t like, …Hubster, casually being a great DAD. 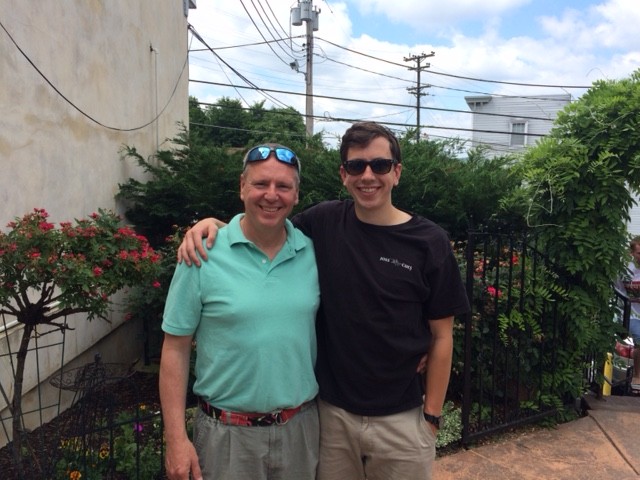 To my dear husband on Father’s Day, I ask a similar question, “How did you know?”