…in other words: Forced Family Fun

Back in January, when the Family Matriarch and the Kitchen King passed through on their way back from Florida to snow infested Massachusetts, they suggested we celebrate #1 Son’s (our brother’s), 65th Birthday here in the Baltimore area. Of course, we all agreed and then waited for someone to make the first move. As usual, the Family Matriarch took charge and a plan was set.

Last Monday, the Family Matriarch (FM), the Kitchen King (KK), Keary and #1 Son Birthday Boy(BB) drove down from Boston to celebrate with a baseball game, a family dinner, visit to a beautiful garden and many rides in the back seat of the car.

The Forced Family Fun (FFF) began with a celebration dinner at a local restaurant.

First World Problem in our family: All in attendance cannot fit in a single photo 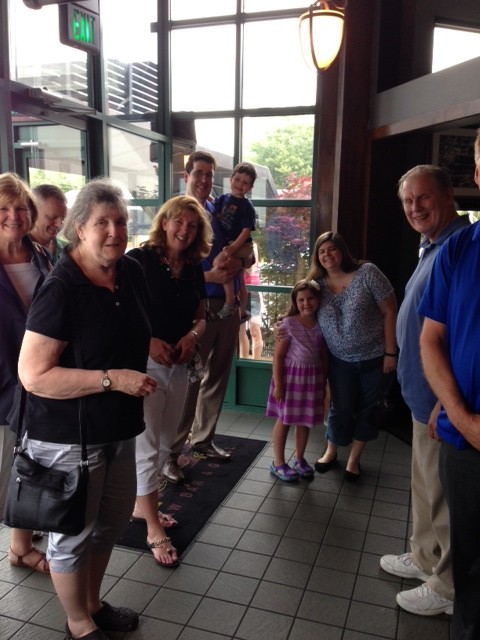 Birthday Boy is to the right….my nephew in the back is 7′ feet tall, his wife to his right, their two adorable children….two of my sisters to the left of me, FM and Irish Twin (IT)…Hubster behind them setting a timer to determine how long it will take before he actually gets to jump into the conversation.

The hostess, with her keen sense to spy a very important party, decided to put us in our own room. Since we all love to hear ourselves talk, this worked out quite well and Hubster was even able to get in a few words edgewise.

Examples of Hubster’s ability to adjust to dinner and conversation with my family.

There are many more “duck and cover” strategies for my family, but he asked that I not give away all his secrets in one blog post.

Initially, Keary had not intended to make the trip, but then decided she could not live without a visit to her favorite sister. (Sorry FM and I.T., when our mother and the Milkman had me, I became everyone’s favorite.)

The FM purchased tickets to a 7:05 pm, Red Sox vs. Baltimore Orioles game for six adults; this quickly became ten. Keary, ever the tourist and world traveler (thanks to her twins who have separately, lived in China, Korea, Washington, DC, Germany, and Kentucky) was not about to let a visit to the Maryland area go “un-tourist attracted” . She suggested we spend the day of the game at Ladew Gardens, about a half hour north of my home.

I decided to take the second of my two personal days in my teaching career to join them.The first of many back seat rides in order to have this FFF, began here.

Having never visited Ladew Gardens; I had no idea what to expect. Let me say, it is definitely worth the price of admission and my photos do not do justice to its grand beauty. I have several photos to share, but if you would like to see for yourself…here is a link to the Ladew website.

I believe there are 25 distinct garden areas…all exquisitely maintained.

“The Thinker”…not the real name of this garden 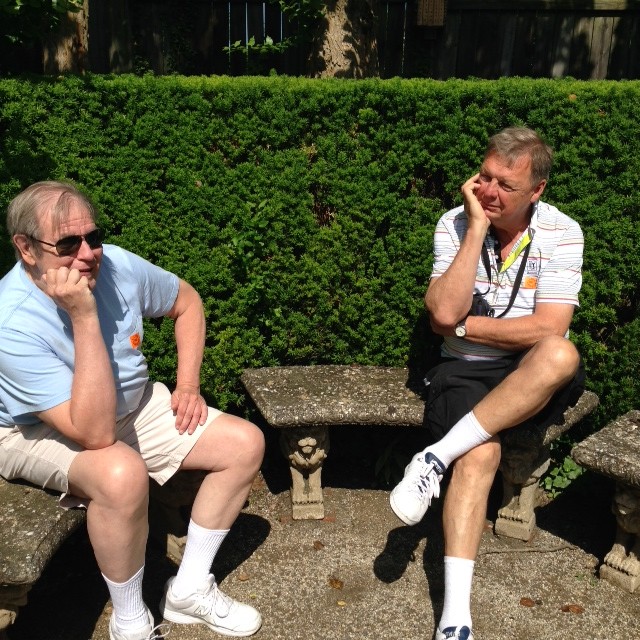 I honestly don’t remember in which garden this photo was taken, but it was one of the first few, … BB and KK were trying to think of a way to excuse themselves from the rest of the gardens. No luck…volun teered* to continue. 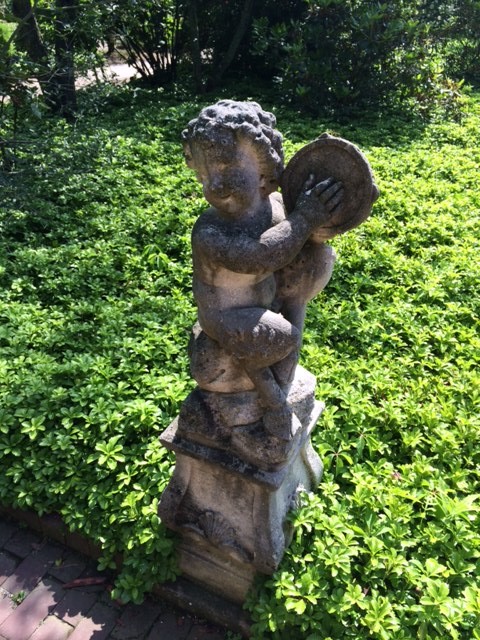 There were many cherubs throughout the gardens, but for some reason each like this had me singing with Bob Dylan sans the guitar and sans Bob Dylan. Also not to brag, but we have pachysandra (ground cover) at our house. 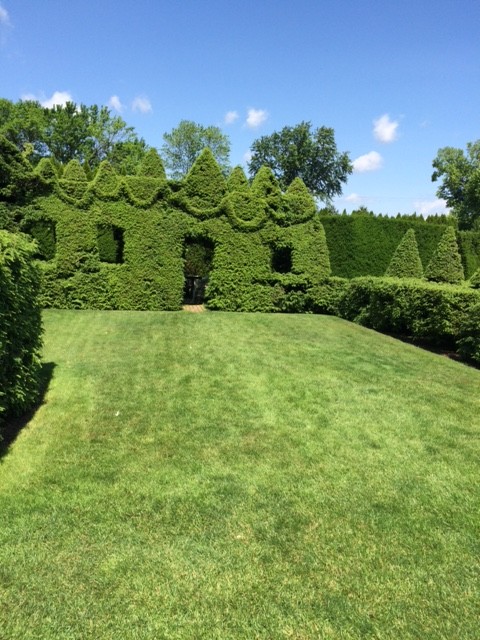 I am thrilled that I have a “reference hedge” for the next adventure in our own “Taming of the Yew”. Hubster Scissor Hands…get ready.

Water Garden…or as I  would call it: FULL TIME JOB 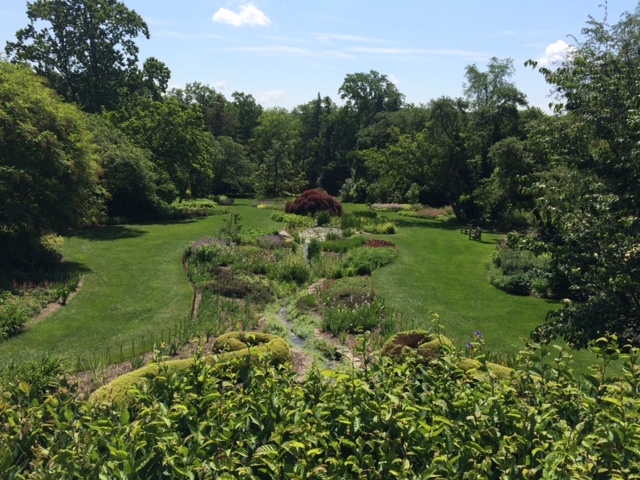 Our neighbors from our first house had a water garden…they went away one summer for three weeks…asked me to look after the water garden noting my own garden expertise… Thought to myself…okay this will be fun….Blue Heron flew in, ate Koi in pond and invasive weed nearly wiped out the rest…I am clearly hospice for water gardens. The neighbors never asked me again. 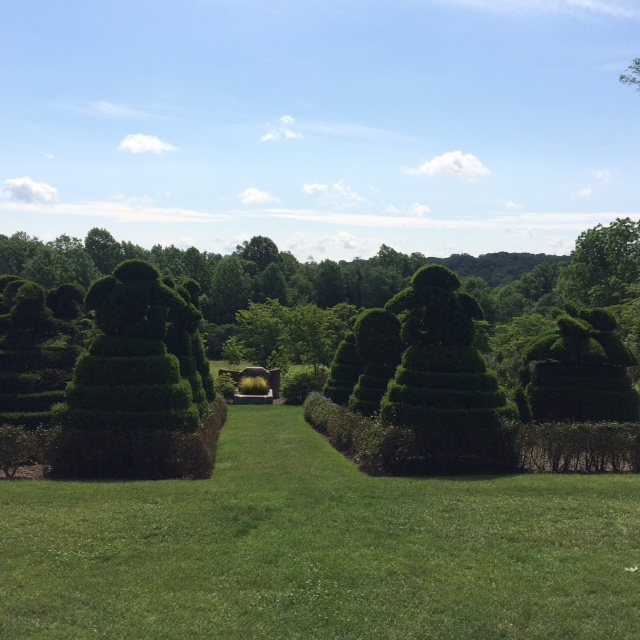 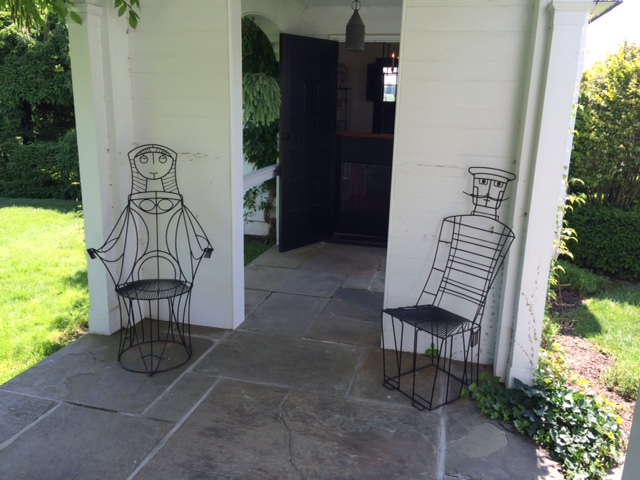 There were two covered walkways from the house to small outbuildings….this one led to a game room where I would imagine late night card playing and perhaps cigar smoking was the norm.

Thrones for the Matriarch and her King 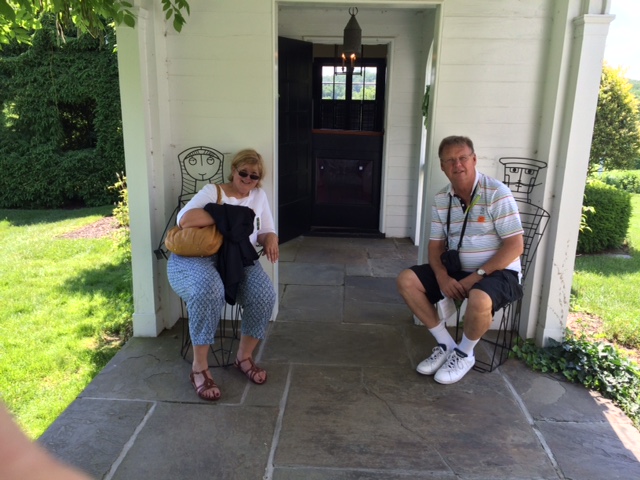 Actually they are a few years older than I, so they needed to sit down.

Wish I had a separate building when the Son-sters were playing   video games…it certainly would have been easier to block out their excessive game play grunting and sibling squabbles.

After our visit to the gardens, we retreated back to the comfort of my sunroom to view my own gardens.

Many “oohs and aahs” were conveyed. 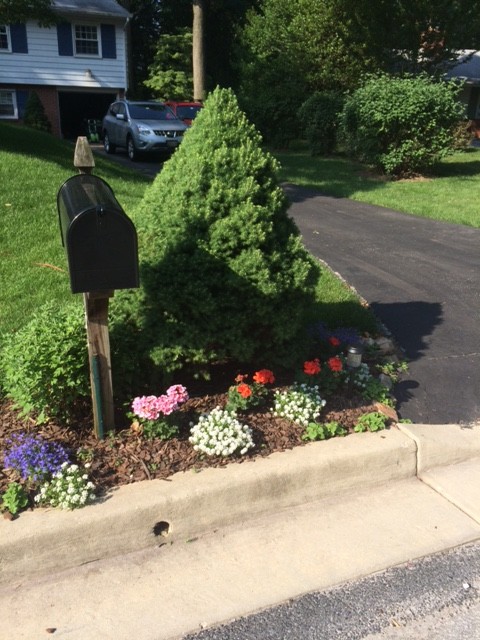 Rogue pink geranium among the “reds”…can’t worry about it now. 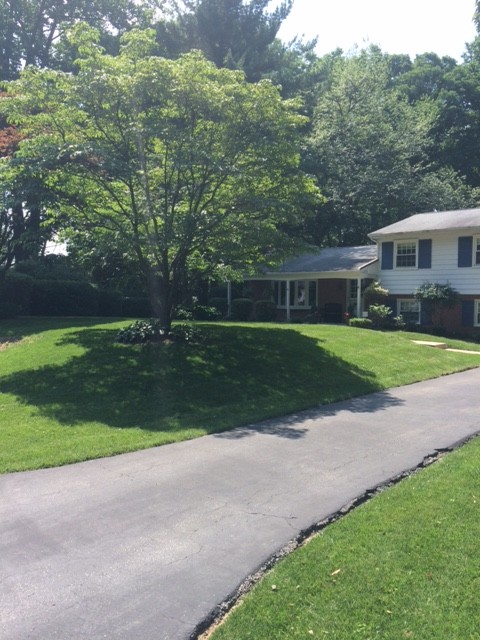 Dogwoods and hosta…grace the front lawn. 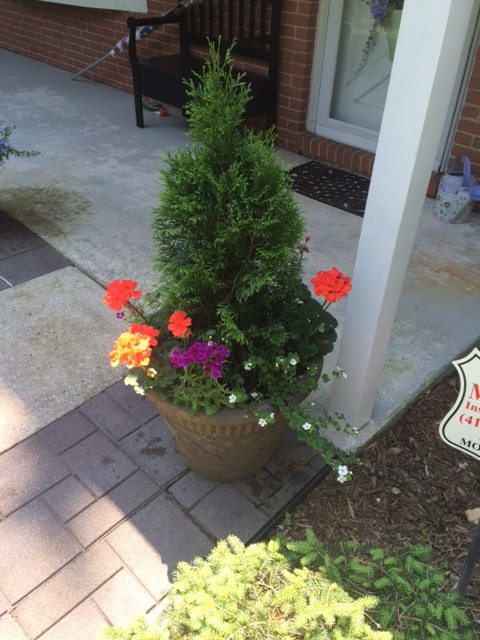 I have two like this… I didn’t even ask my family to pay admission to view this lovely.

Just to prove my thumb is green, I picked my first two red tomatoes. The KK was highly impressed, as expected. 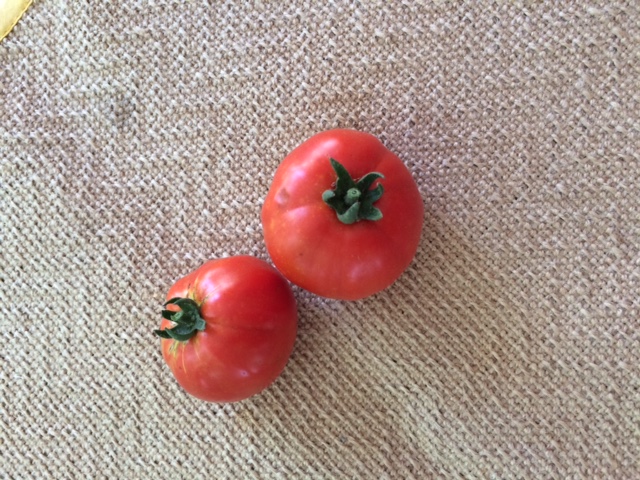 After a little nap and dinner…we headed to the game. 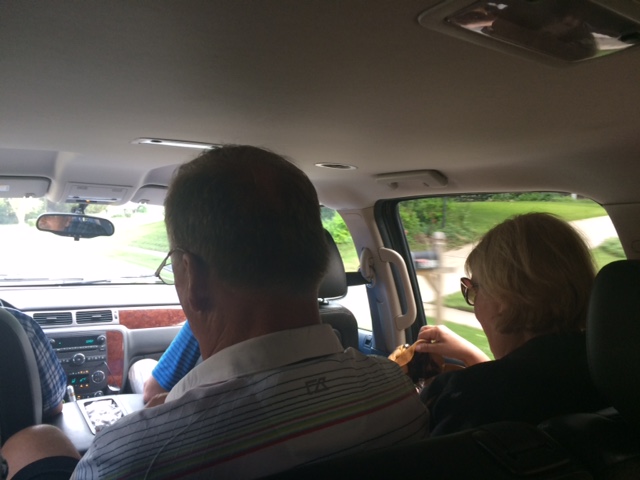 Our Uber driver, Syed suggested I sit in the third row…while getting tired of being relegated to the backseat, I knew he recognized my agile youth. 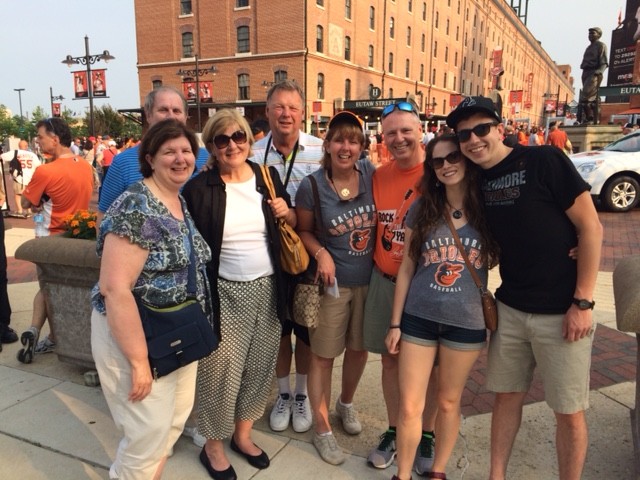 Just outside Camden Yards…the second best ballpark in the nation…Fenway being #1 in my book. L-R front: Keary, Family Matriarch , Beemie, Hubster, Bertie and our #1 Son-ster. L-R back: Birthday Boy and Kitchen King.

(Must use my French or I will lose it.) 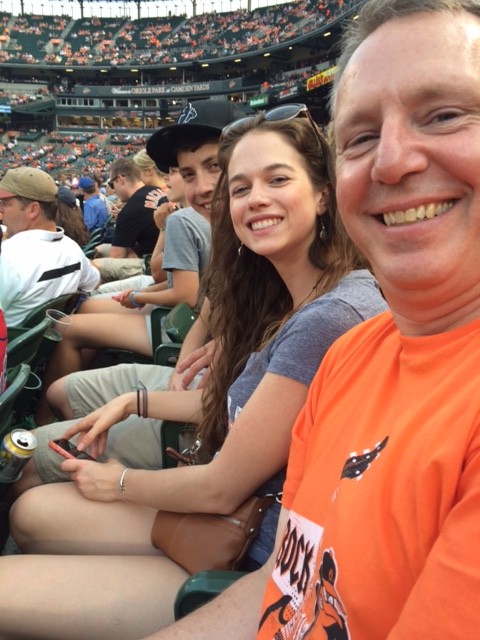 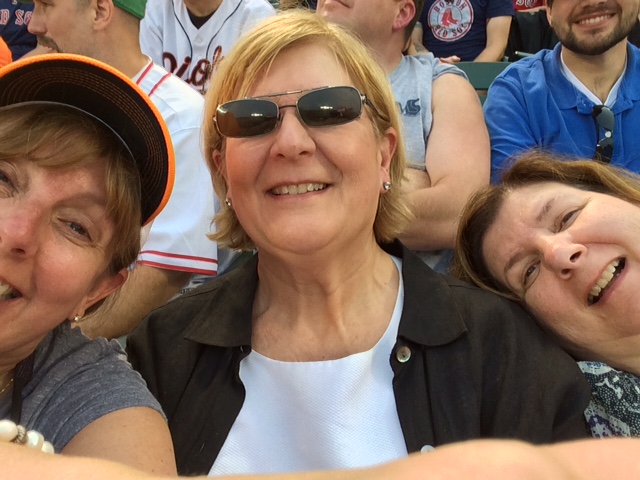 Three of the four girls. Please note that even though game was in Baltimore plenty of the Red Sox Nation, including my own family, was around us. 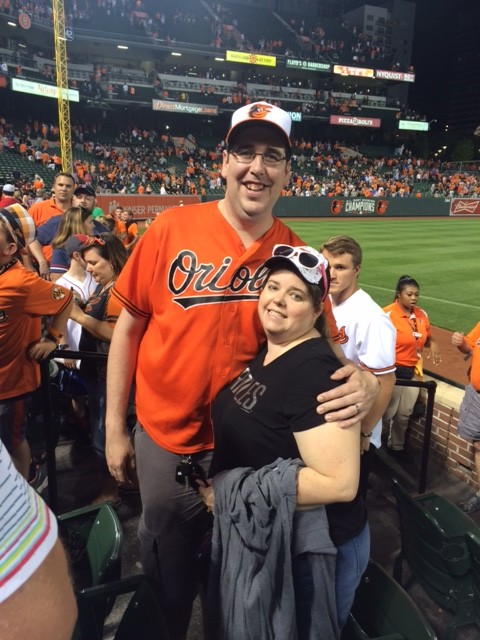 High school sweethearts… My nephew and his wife. Yes, 7′ feet tall; yes, he played basketball in high school; no, he did not play when he attended Purdue University, and his career is in something other than basketball….everyone asks these questions.

Our time together was brief, but special.

Friendly family reminder when it comes to FFF 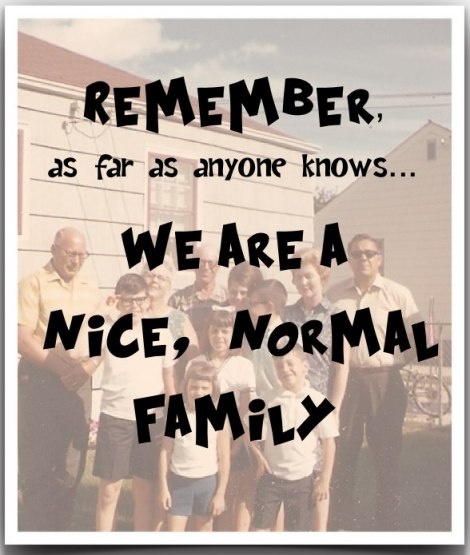 * Volun-told….my niece (one of Keary’s twins) a nurse and former Army Captain, coined this word for many tasks in our family and in the Army. I do not believe the word is classified, but just in case I blame her.