This post is new to my blog, but was written several years ago as an essay and shared with family, friends, and colleagues…sorry if you are reading this again. It is worth the read…and this time there are photos. 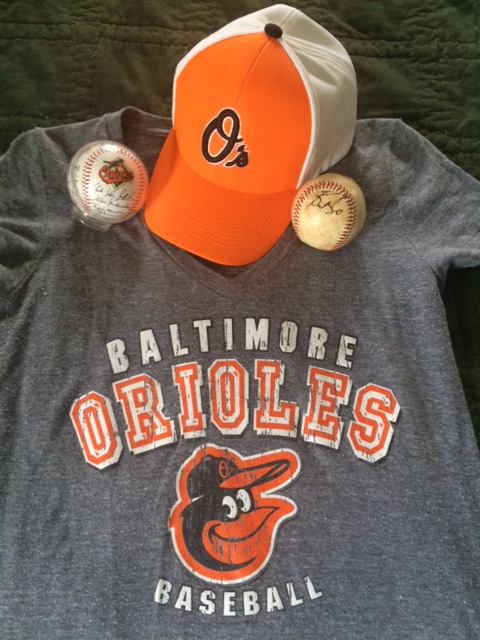 My outfit for the one game I attend every year…I leave the baseballs at home…The Pete Rose baseball was obtained by Hubster in the 80’s.

I am not exactly a true blue or in “Baltimorese”, orange and black baseball fan, but there is something about Opening Day that signals the beginning of a new year. It may be spring or the thought of a renewed chance to win it all. This could be the year for the Baltimore Orioles and perhaps, we just need to believe, Hon.

For many years of my childhood I watched as my father had once again believed that our beloved Boston Red Sox might finally have their year. The last time the Red Sox had won the World Series was in 1918. My father was born in 1919. He was a life-long fan. 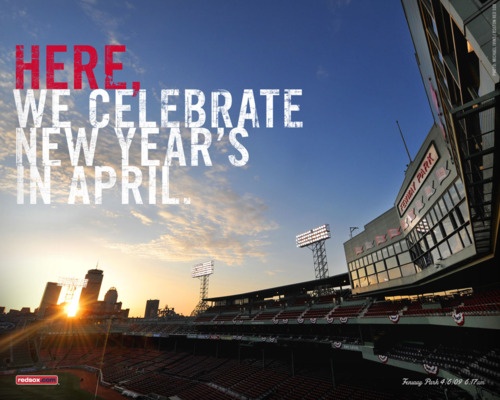 When I found letters he wrote to my mother during World War II he spoke of his devotion to the team even while stationed across the country with a bombardier squadron in the United States Army Air Corp. As we know, most major league baseball teams were disbanded during the war, but he still had faith. I am sure this mention of the team in their love letters was what finally convinced my mother he was the man for her. Truthfully she was not a sports fan, but thankfully for my sisters, brothers and me, she somehow managed to forgive him his baseball transgressions and marry him anyway. He loved all sports actually, but there was a true allegiance to the Boston Red Sox. 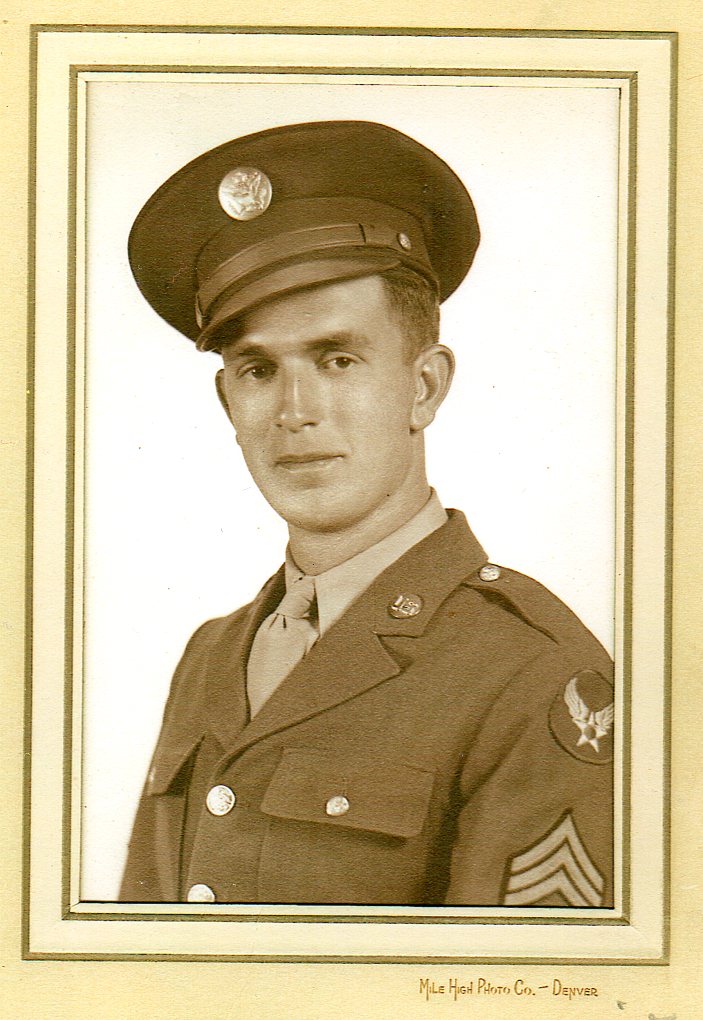 Many childhood memories for me include the smell of summer air with the kitchen windows open and my father listening to the game on the radio within earshot of the occasional train passing by on the elevated Orange Line. I would often ask for interpretation of some of the commentary, “Swung on and miss.”

He was so engrossed that sometimes he didn’t hear my question. Fortunately, I figured out the lingo on my own.

As a very young child I had no concept of the past, I asked my mother, a devout Catholic if she lived at the same time as Jesus Christ, her response was a resounding, “NO”. I then went to my father, the dedicated Red Sox fan, and inquired if he was alive when Babe Ruth played baseball. He spoke of watching the “Babe” play at Fenway Park for the Yankees. Who knew that someday I would reside in the town where “Babe” was born. These baseball conversations were some of the sweetest because he was not often a man of many words, but I can hear his voice name Joe DiMaggio, Ted Williams and Carl Yastrzemski like it is happening now.

One of the Milkman’s favorite players…I remember there was a song about Carl Yaztremski.

I attended college in Baltimore, when in 1983 the Baltimore Orioles won the World Series. It was so exciting to be in a town where a team had taken the coveted trophy. The day after the Orioles clinched the World Series, my father reached me on my dorm room phone to talk about the win. Because I was living where a team had won he was just as excited even though it wasn’t his team. 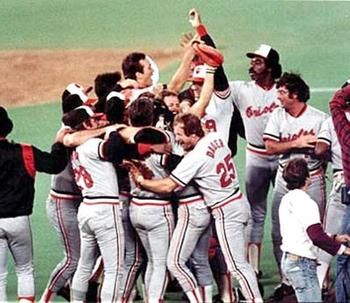 I don’t know for certain if this is the winning moment.

Baseball was dear to him. He did not have season tickets as it was too costly for a man with seven children, but he was the proud owner of a club level seat in front of the small black and white TV that eventually took the place of the radio in the kitchen. The glow of the game would sometimes continue late into the evenings even though my milkman father had to get up before dawn to deliver the milk. He believed every year would be their year. In 1975, against the Cincinnati Reds, the Red Sox went to the seventh game of the World Series. The disappointing loss only brought stronger conviction that his team could someday win it all. 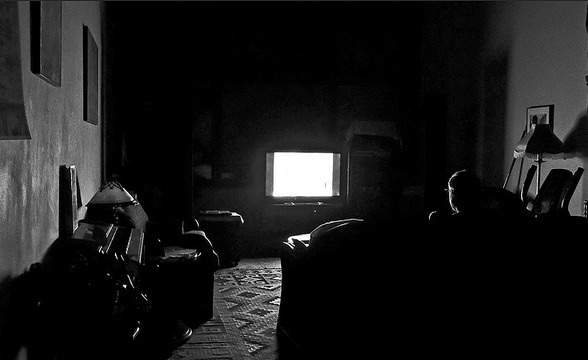 When I graduated from college in 1985 and returned to Boston the year before I married, he was still watching the game, only someone had upgraded the TV and now he was watching in living color.  Because this man had done right by his children, he was fortunate to have been the beneficiary of game tickets, now and then, facing Fenway’s “Green Monstah” and even took a grandson on occasion. He still believed they would win. 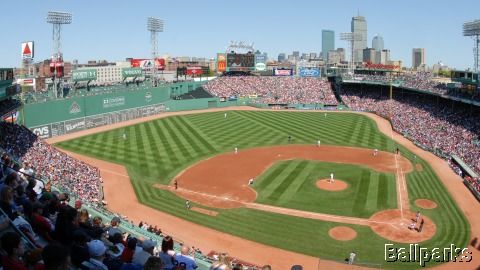 One evening in the spring of 1986, only a few months from my wedding he sat at his aforementioned seat in the kitchen watching the game. A young pitcher by the name of Roger Clemens was striking out opposing batters with ease. The fans at Fenway were frenzied and began posting K’s somewhere out near the “Green Monstah”. As I paused to watch the game, I was confused by the K’s. The posted K’s stood for strikeouts my father explained. Clemens was on his way to striking out a record number of batters. It was history in the making. I took a seat with my father by the kitchen table with only the radiance from the screen giving light to our nervous excitement of the moment. We didn’t speak, but just basked in the glory that this might be the year. Roger Clemens went on to strike out 20 batters in a nine-inning game. He was the first to do so and I watched it with my father.

A few months later my father walked me down the aisle to my wonderful husband who according to my mother, stole me from my hometown. The only thing that concerned my father was what baseball team would I be “rooting for.” Of course, with crossed fingers, I stated, “the Boston Red Sox.” I think he knew my allegiance may change, even though through birthright I am forever connected to the Boston Red Sox. 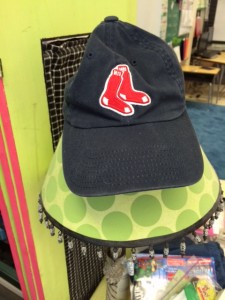 Back in Boston and later that year, the Red Sox once again went on to the World Series. The New York Mets won. He would not be disillusioned by the loss and continued to cheer for the home team. Like most Boston fans, he was once again, left to suffer in silence.

On March 26, 2004, with only days away from Opening Day my father died. In the fall of 2004, the Boston Red Sox won the World Series. It was 84 years of Opening Days never to witness this unbelievable event. However, I do believe his divine intervention may have played a role in their unbelievable four games to none in the best of seven win against the St. Louis Cardinals. 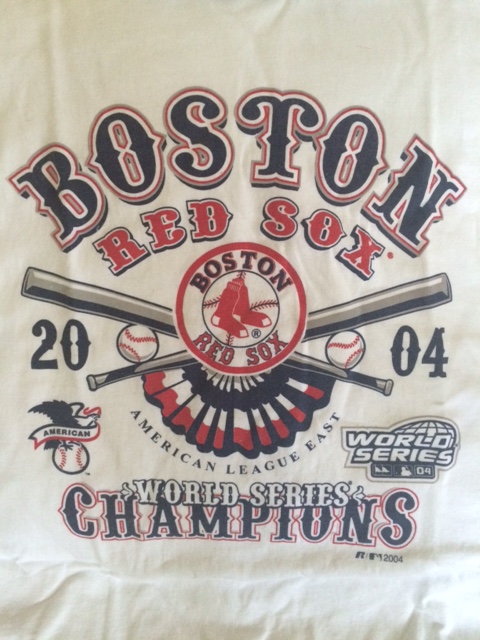 After reading my essay several years ago, a dear friend happened upon this shirt in mint condition at a thrift store here in the Baltimore area.

Eleven years and three World Series wins for the Boston Red Sox have passed since he was buried on March 29, 2004.  My family sang the Star Spangled Banner and Oh Canada, for his native country by his graveside that day and I can’t help but think he was watching down on us. If he could have spoken, his words would have been, “Play Ball.”

In loving memory of my father, the Milkman, he embodied love of God, family, country and the Boston Red Sox. Wishing all baseball fans, no matter the team, the love of a father I called my own. 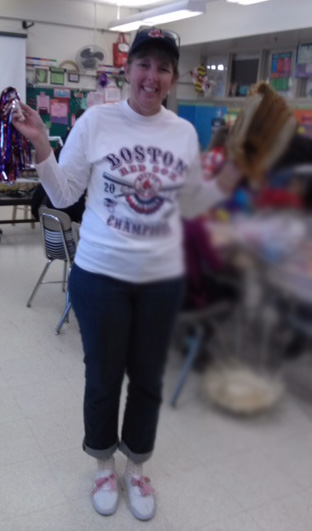 Fall costume parade 2013…the day after the Red Sox won the World Series.

Go Orioles! (Sorry Dad, but I know you’ll forgive me)…and if not then, Go Red Sox!..or any other team, with the exception of the New York Yankees*. Some things never change.

*no offense to my Yankees friends, but enough already.