…in other words, it’s the month of my birthday.

That’s right December is my birthday month. My parents were big fans of December because three of the seven children were born in the month of the December. The best and “most perfect”of the crew being me, came last. Since most of their other children were of the knowledgeable age to the birth process; they were of course mortified that my parents, well into their forties, were bringing forth another mouth to feed. If you are Catholic then you will be happy to hear that I arrived on the Feast of the Immaculate Conception.

As a young child, when the nuns learned of my birthday they would all comment about this, later I learned just exactly what an Immaculate Conception meant thus I came to believe that given my parents age I was indeed an Immaculate Conception.  In recent years, I have come to learn that an Ash Wednesday snowstorm caused a blackout in the city of Boston so given there was no television for my father to watch, I was the result.

This photo was taken after a snowstorm about 20 years before, but only a few blocks up the way from my childhood home. 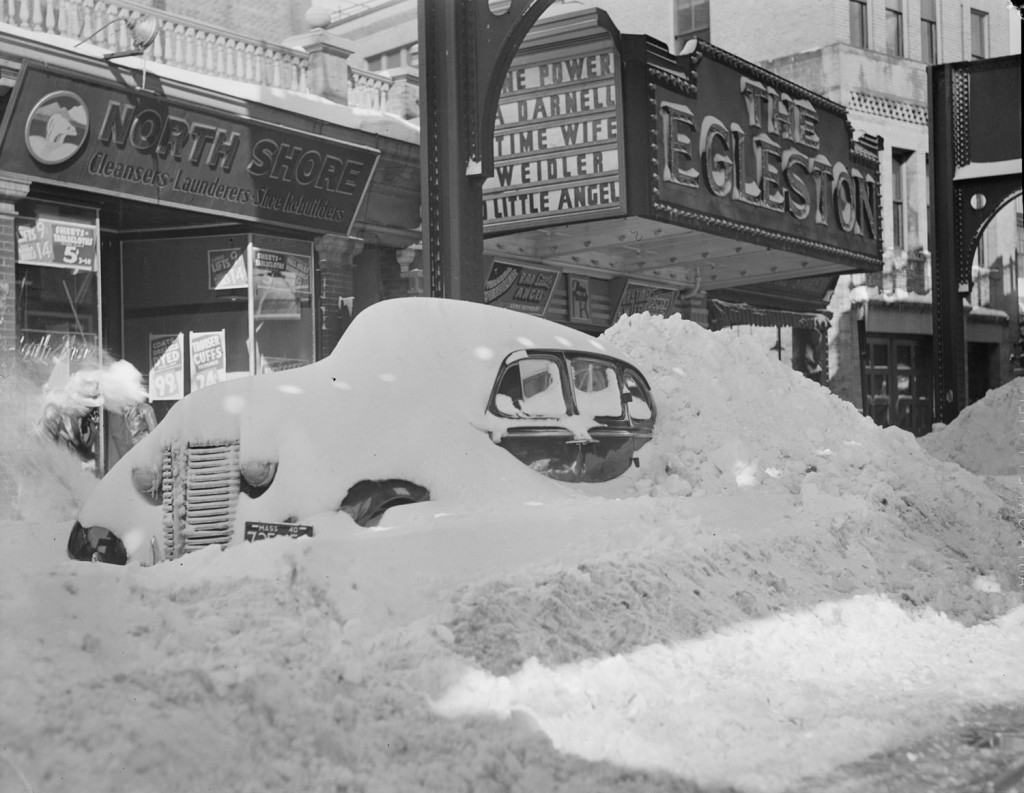 This year’s birthday month celebration began about the crack of 3:35 pm Friday or the exact moment I could legally leave the academic establishment where I am a teacher. I drove straight to Home Depot where I purchased a 5′-6′ Balsam Fir for the living room. I was fully intending to decorate the tree this weekend, but the birthday festivities precluded the tree coronation and induction into the living room. It is still sitting on the front porch waiting for the adornments.

Friday: Rick and Tatiana took us out for dinner at Fleming’s…mmm! Delish… Apparently we were such a fun table the management decided a photo was necessary. We can’t help that we are an incredibly entertaining group. 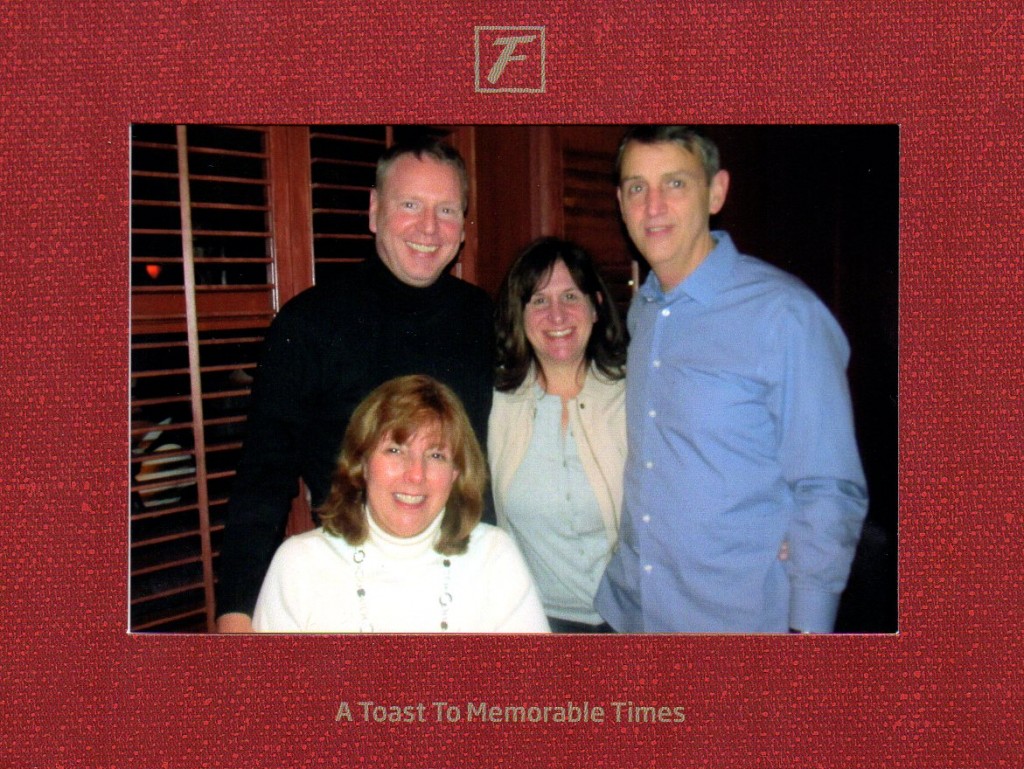 We spent a small fortune on cheese… 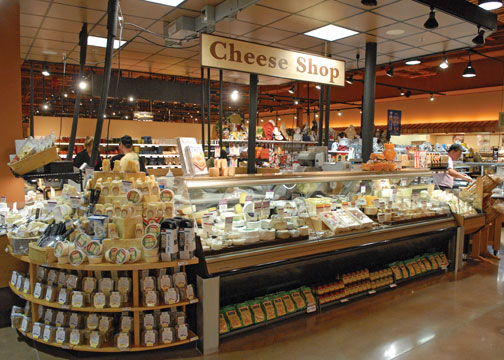 Sorry Son-sters, we spent your inheritance on cheese…it was worth it.

Our favorite third wheel, Peggy Anne arrived. We offered to bring her bag up to her room, but she stated she knew the way given she carved her initials in the headboard. Immediately the phones came out for the photos, Hubster and I were already in our PJs’s as we knew we were in for the night.

Hubster set a fire in the fireplace so that when we started to eat and drink we would be nice and toasty.

Forgot to use the flash.

Please forgive the dress down by me for the festivities. 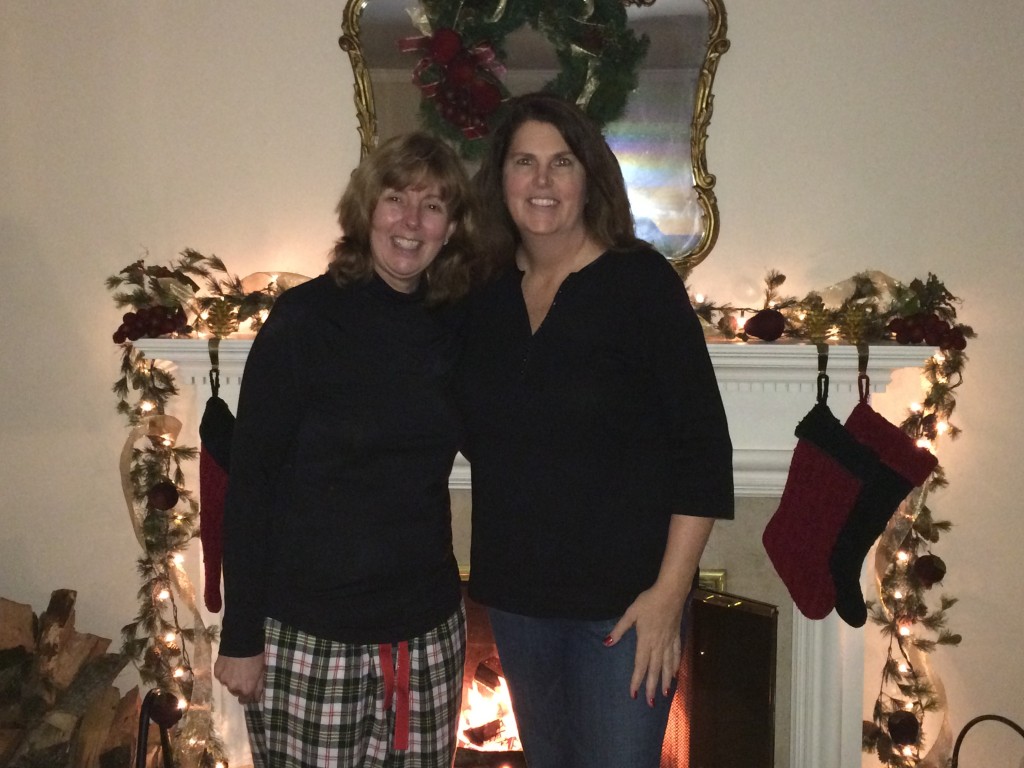 This was taken after Peggy Anne moved her belongings upstairs into the “big room” for the long winter’s nap. I’m not sure if she realizes the initial carving will be reflected on her bill.

We are such a wild bunch after eating and drinking we were burning the midnight candle until 10 pm…at least we saved two hours of wax.

Sunday: I slept in until 7:30 am…I couldn’t believe it I am usually awake at 6 am. I didn’t have the heart to wake Peggy Anne even though she insisted we hit the early Mass…needless to say she slept until 8 am which meant we had to skip Mass. Hubster told us not to worry about it because  we are “holier than thou”.

We had a brunch reservation in downtown Baltimore. A free parking spot was located quickly on Son-ster #1’s parking pad. Convenient since the restaurant was right around the corner. 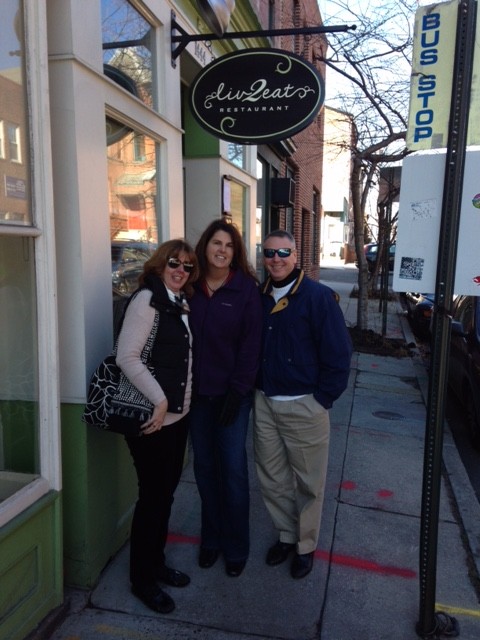 Three hipsters out for a morning stroll.

This was Peggy Anne’s plate, but all of us had the same menu item…Jumbo lump crab eggs Benedict. 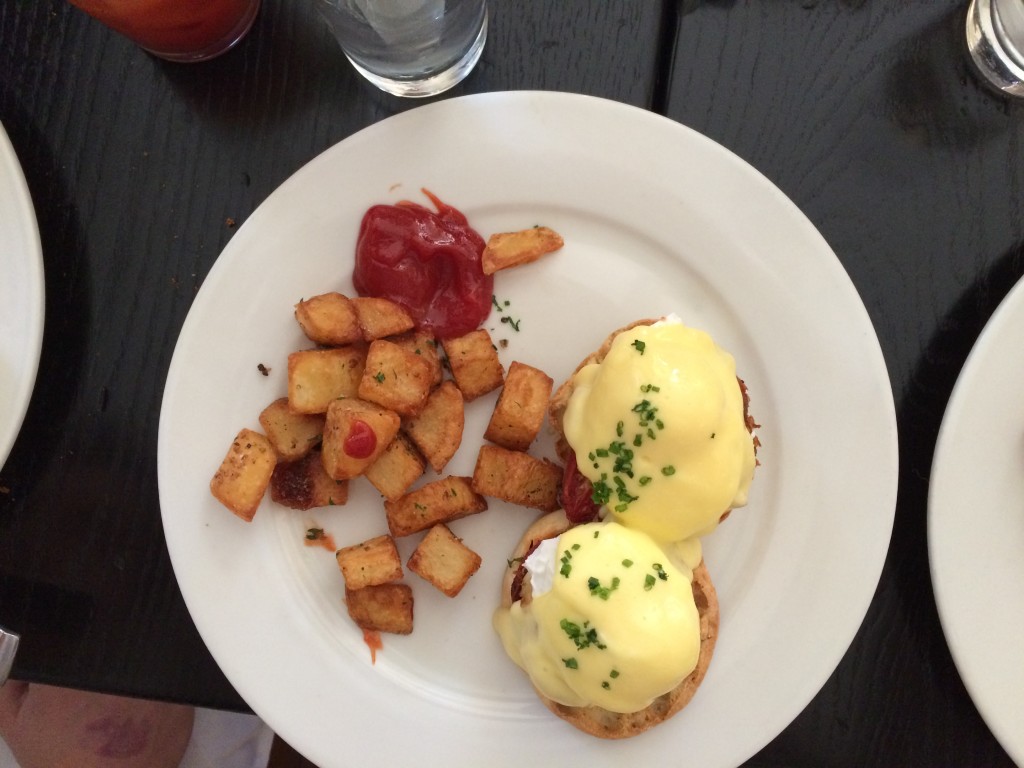 Absolutely…the best I have ever had…the Bloody Mary which accompanied my meal was made with Saki…also fabulous. 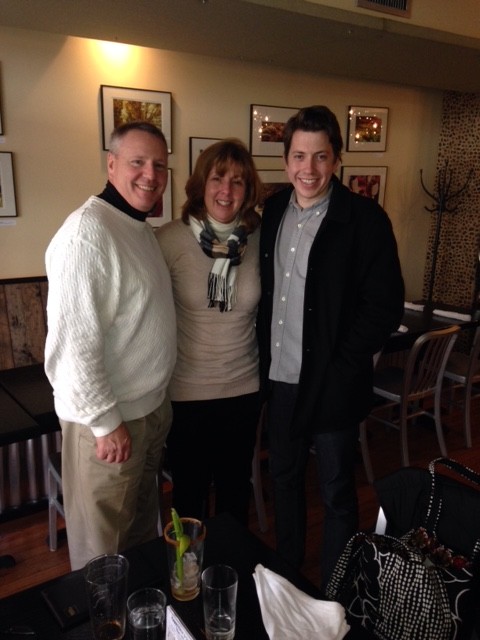 #1 recognizes that having popular parents is a cross he must bear. Although I think he is beginning to see that maybe #2 has the right idea living hundreds of miles away. 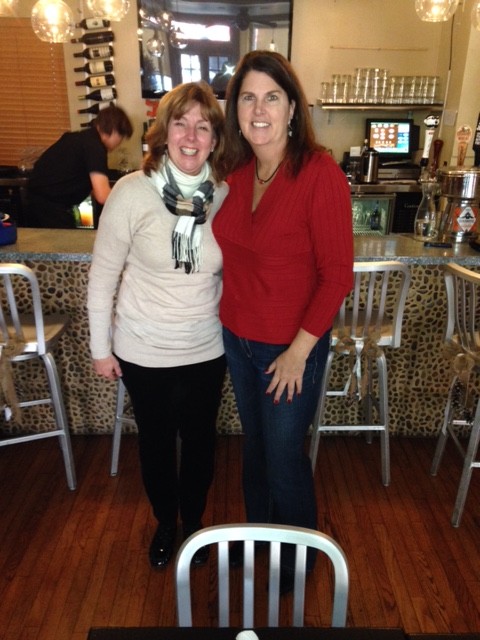 We have not changed a bit since we were thrown together in a dorm room in the fall of 1981.

Bertie, Son-ster #1’s girlfriend had to work so we knew she would be disappointed if we didn’t make an appearance at the watering hole she manages in the neighborhood.

We headed home later where I promptly took a nap. Peggy Anne bid us goodbye as she was determined to make it home for the start of her Philadelphia Eagles football game. It seems once again she forgot to pay her bill..oh well she will be back.

As mentioned, I am not the only one who celebrates a birthday this month…Keary’s birthday falls on a day that will live in infamy.

With her twins…not quite babies anymore. 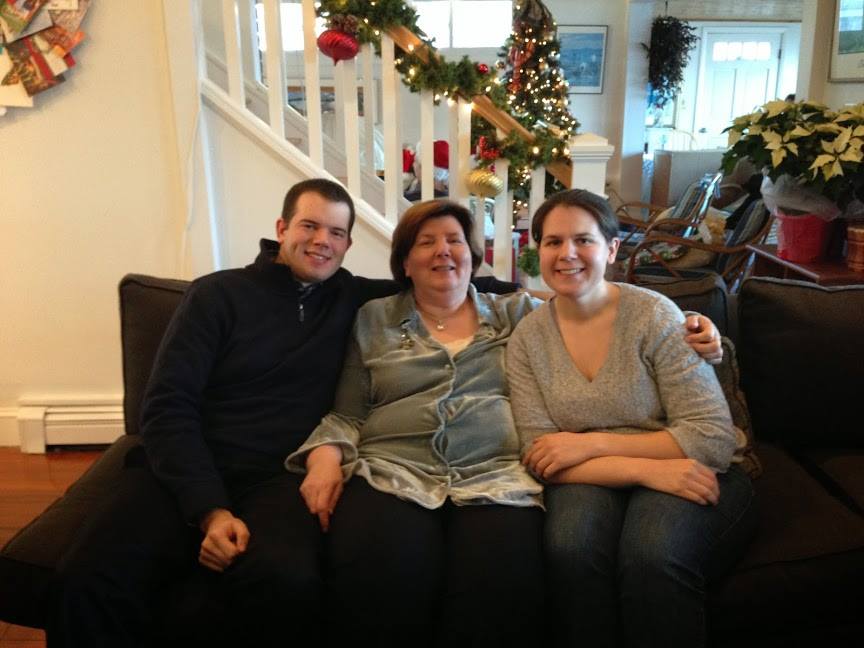 Hubster because I don’t want you to rush around finding just the right gift for my birthday and because I know you prefer to surprise me I picked out a few small suggestions…you can choose the one you would like to present to me.

Hint: the larger of the three would be a real surprise… 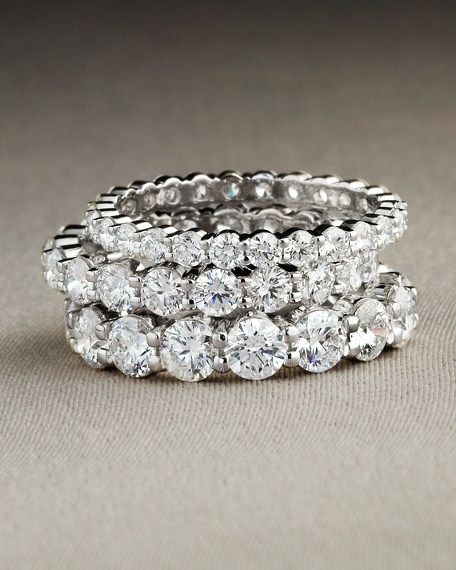 …use your judgement size really does matter.

Happy Monday and Feast of the Immaculate Conception, not just another Holy Day of Obligation, a celebration of me…oh, and I guess that other big birthday that occurs later this month.

My goodness, even Google knows it is my birthday! What a surprise!