While I would be willing, my bank account definitely has other ideas.

Because there is no rest for the weary and since the Thanksgiving holiday was for early riser as noted by previous post. I was up long before daylight on Saturday morning to fly to Boston to surprise the Family Matriarch (FM) for her retirement party. The Hubster was a very good sport about driving me to the airport long before the sun made an appearance because he doesn’t like to drink coffee alone.

Once safely buckled on the flight and snugly seated next to a very disgruntled passenger who complained to her husband who in turn threatened to move his seat if she didn’t stop complaining I did manage to take a 30 minute nap. When I awoke to find the sunshine peeking through the window shade I  spotted my perturbed elbow neighbor passenger video taping the crew with her phone…hopefully she didn’t catch me with my mouth agape.

Since I have an excellent track record with capturing photos at the precise moment (read here), I snapped this pic of my former hometown…. 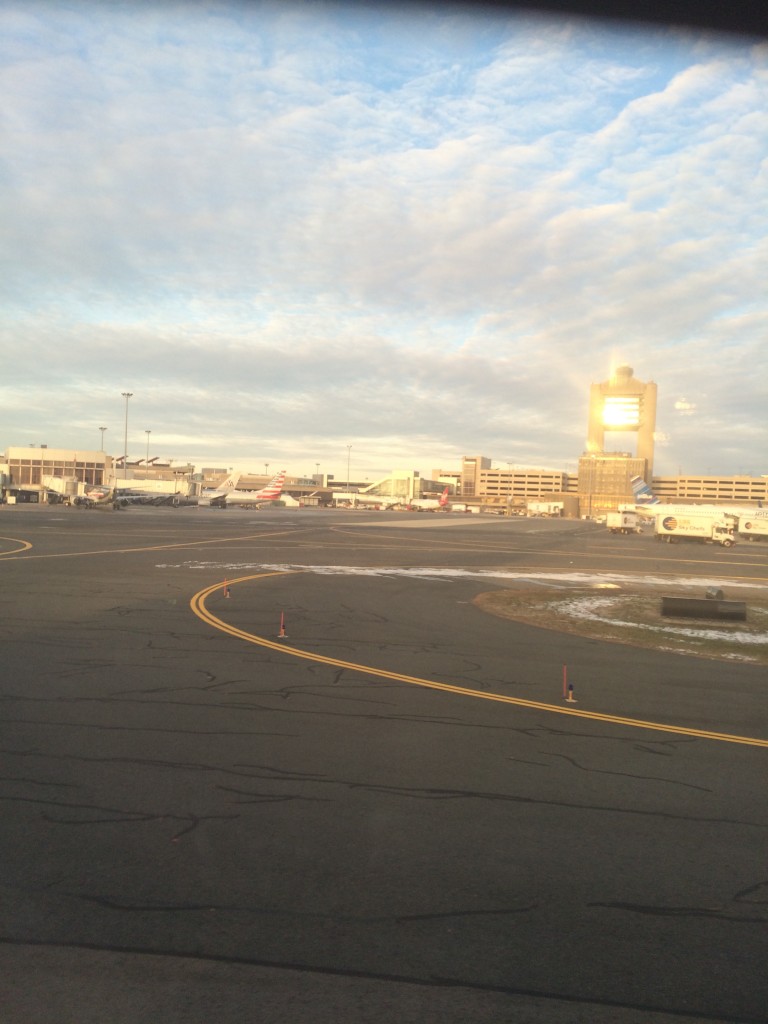 Okay so just a photo of Logan Airport…

My sister, Keary was kind enough to pick me up at the airport so that I didn’t have to take the Silver Line to South Station, then the Red Line to Downtown Crossing, then the Orange Line to Green…I am exhausted just thinking that I used to ride the T making all those transfers on a fairly regular basis.

Keary suggested that since it was still the breakfast hour we should head over to Brookline to eat at her favorite morning locale. My arm was twisted quite easily at this prospect. We arrived just as they were opening…I felt like I had been up for days, but I guess the “Brookline-ites” are late risers. 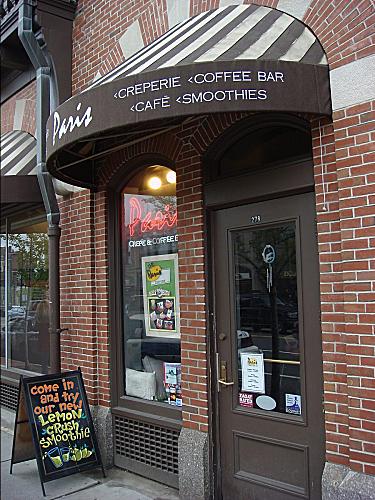 Since my coffee needs had been met with the Hubster before the dawn’s early light, Keary suggested the hot cocoa… 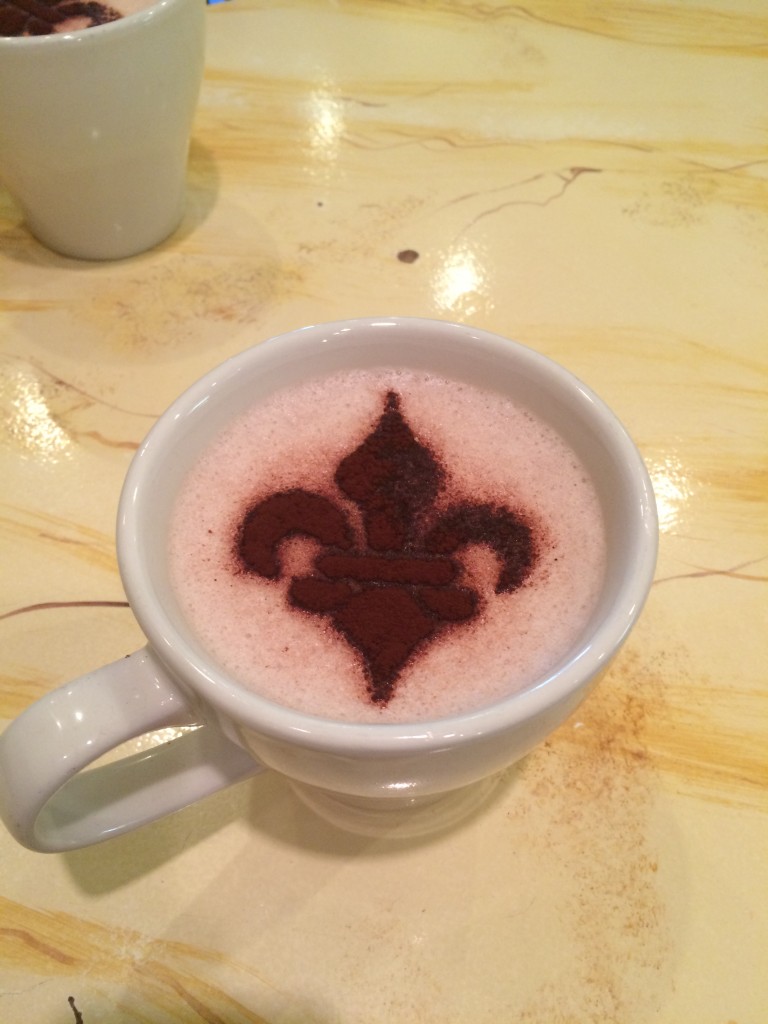 Because a fleur-de-lis should be served with every beverage …

After breakfast, Keary took me to her house so that we could get ready for the big party. Keary lives in the house next to our childhood home. It is always comforting to go back to the old neighborhood. Also getting ready for a big event reminded both of us of the good old days when we would do each other’s hair and make-up happily and serenely in our room.

Amazing she still had this photo of us from years ago…see how well we used to get along.

Not us…because the screaming would have been louder.

Keary had volunteered to help with the party set up so we headed over to the Family Matriarch’s house in Quincy. She and the Kitchen King are moving to their beach house further down on the South Shore so having the party one last time in their family home was perfect. We have shared many wedding showers (including my own), baby showers, christenings, the Kitchen King retired twice, birthday parties, Thanksgivings, Christmases and so much more at that house.

If you are looking for a fabulous historic home on land once owned by John Adams, then this 6 bedroom, 4 bath home may be for you. 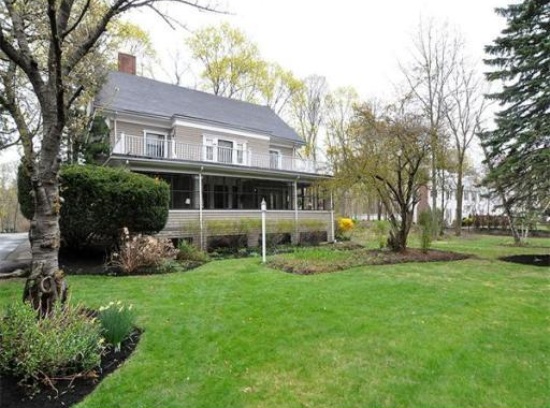 This photo was taken in the spring…

Keary, her daughter (my niece, the Captain) and I arrived. I was fully expecting to surprise the FM at that moment, but she had a hair appointment. Instead, I surprised the Kitchen King, my #1 niece and my #1 nephew’s wife. Keary and I did not tell anyone I was coming so it was fun to surprise them.

While we waited for the FM we went about creating photo collages for the party. Here are a couple of my favorites…

One of her clinical rounds in Brockton… 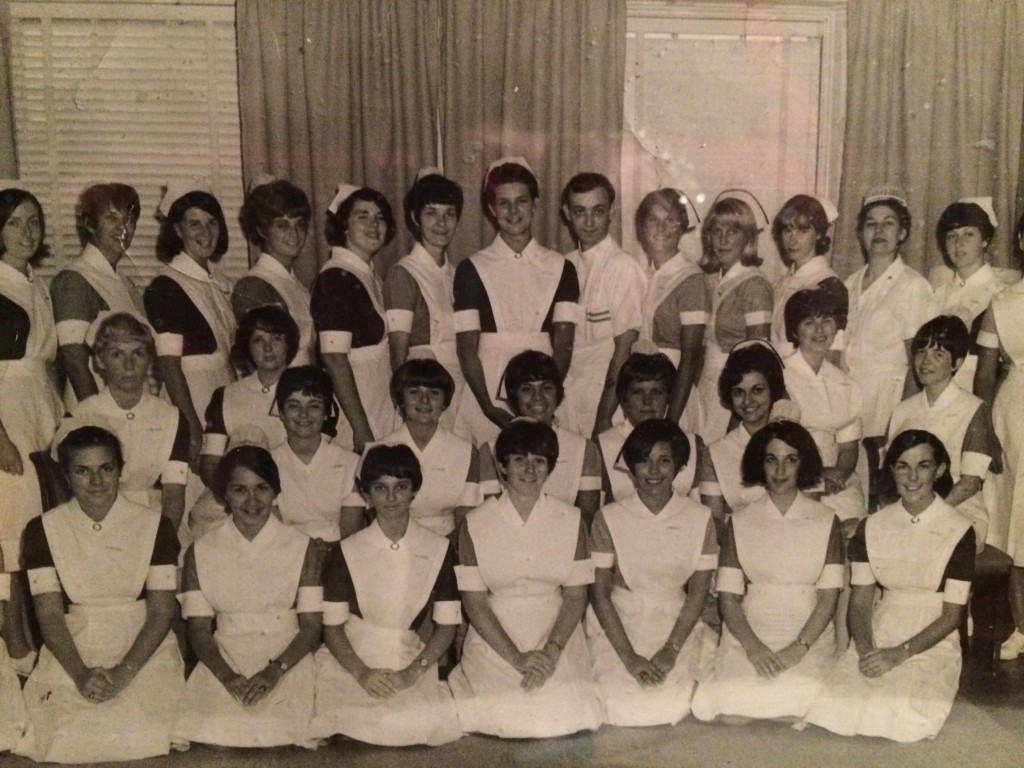 She is in the center of the back row. 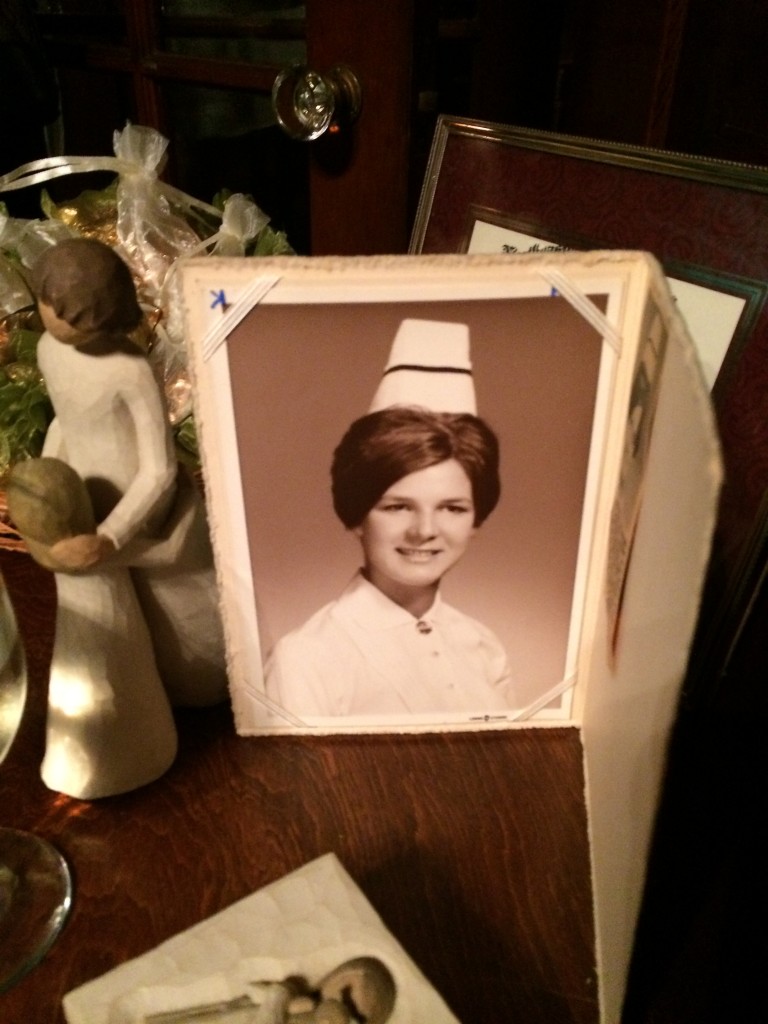 The photos of her early days in her career are but a mere shadow of the nurse she would become…for as long as I can remember the FM continued her education. She became a nurse practitioner and went on to earn her Master’s Degree and multiple other certifications. Eventually, she worked in pediatrics at Harvard before it joined with Vanguard. Building many relationships with patients and doctors she realized a dream by opening a pediatrics practice which grew very quickly. Her son#2 wrote this on his Facebook page which I believe speaks volumes:

Mom, congratulations on your amazing career! You have touched the hearts of so many families throughout the years. I am so proud of you! You have worked so hard throughout your entire life and you did it with integrity, loyalty, love, and passion! So many times I have heard from people that you were either their or their kids pediatrician and they always said how much they loved and trusted you. I know that your career path was not just a job to you. It was apparent in the way you worked and cared for people. Not enough people in their lives find what they were meant to do as a profession. Your patients were lucky that you found yours!!!!!

Not only did she care for others she also cared for her entire family, whether it be our parents or one of us, she was there with medical expertise that no amount of health insurance could pay for better care. It seemed each time my own little family drove up to New England one of the Son-sters would develop an ear infection, strep throat or some other childhood ailment. I am pretty sure the office manager at the practice thought we were regular patients.

She will definitely be missed, but I am thrilled that she will have a much deserved life of her choice. She was quite surprised that I flew up on Thanksgiving weekend, the busiest travel time of the year to attend the party. Oh the sacrifice I had to make, but it was all worth it, for when she returned from her appointment she cried because I had made the trip.

Some fun photos from the party: (Get ready for some serious red-eye. Alcohol played no part in this photographic special effect.) 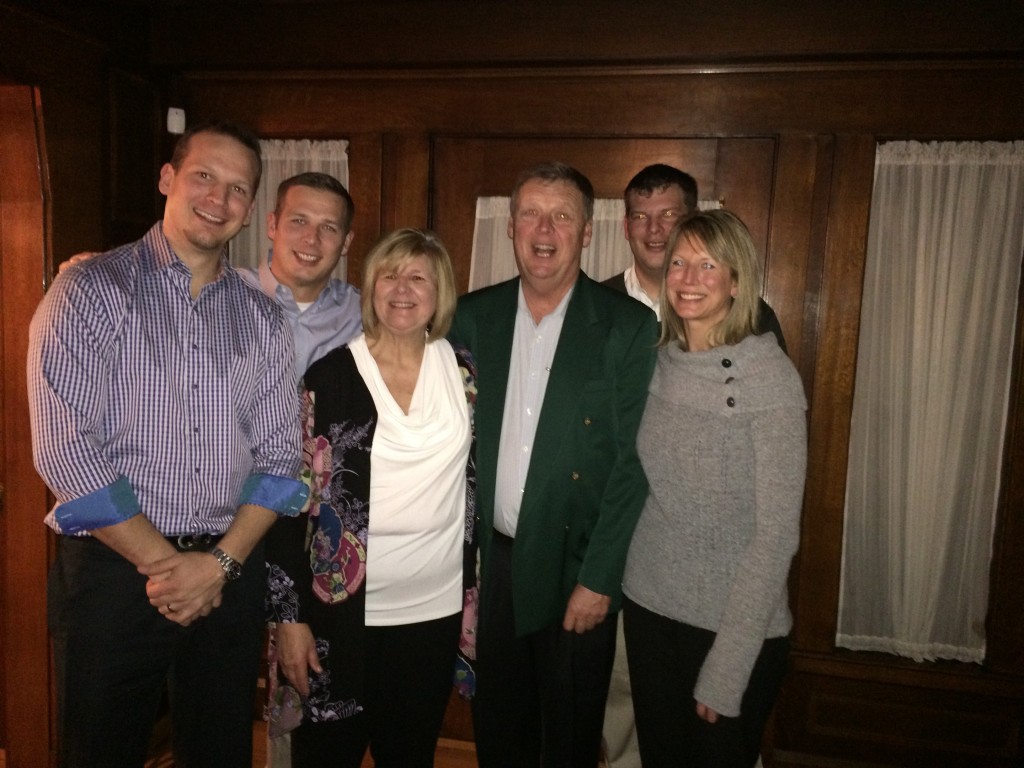 The Family Matriarch, Kitchen King and their four children.

The men stay close to one of the food stations. 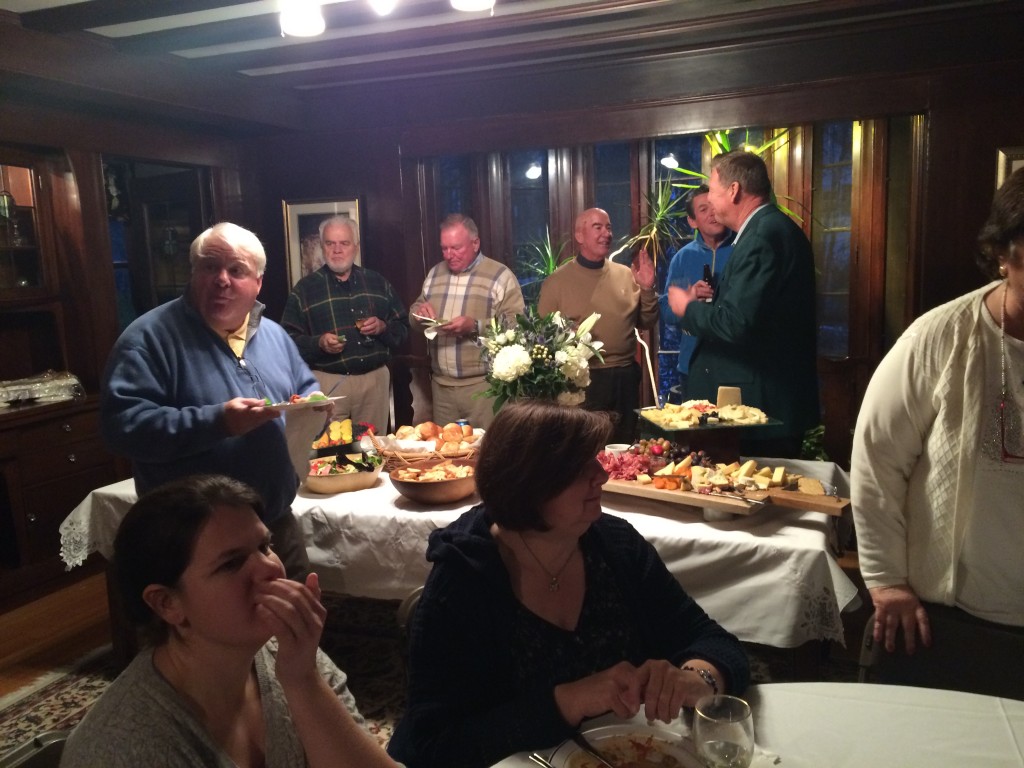 The men kept Viv, a family friend and chef quite busy refilling. 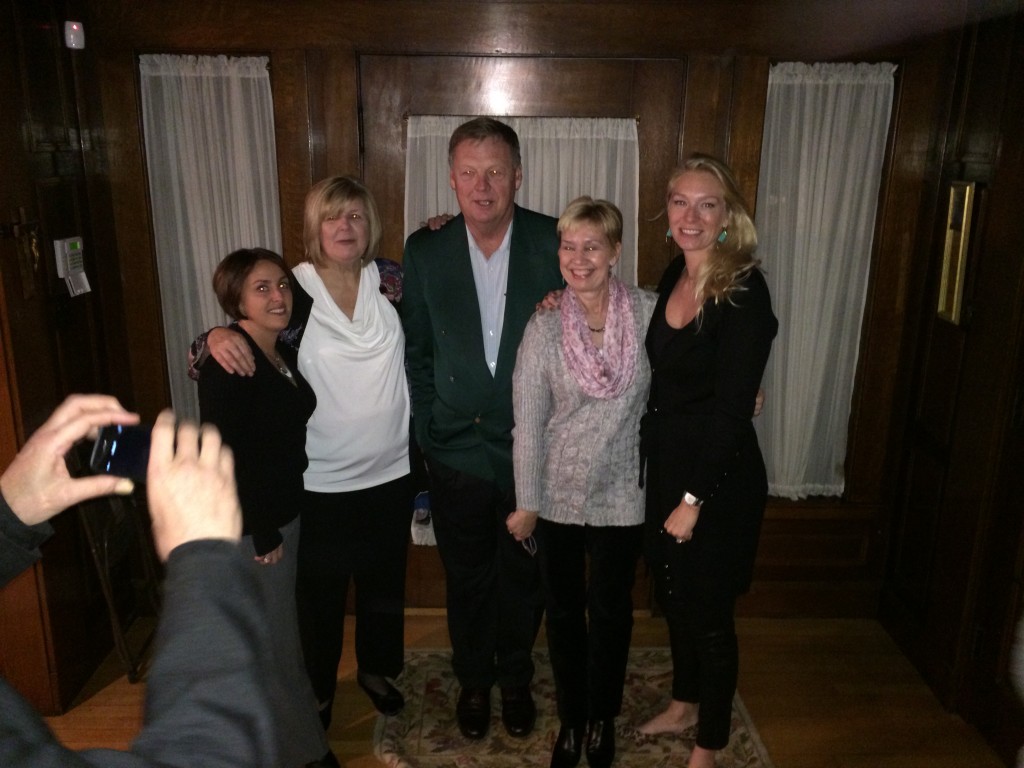 The jazz band played for hours without taking a break…they were fabulous.

Earlier in the day when we were making the photo collages, Keary and I came across a photo that we did not know existed. We believe it was taken by a newspaper photographer who knew our family way back when. We think the photo was taken in Jamaica Plain in front of Curtis Hall ( a municipal building). We are not sure why we were there and there is a random girl in the photo that we do not recognize. We think it was taken in 1971.

Because we are a fun crew we tried to duplicate the photo. 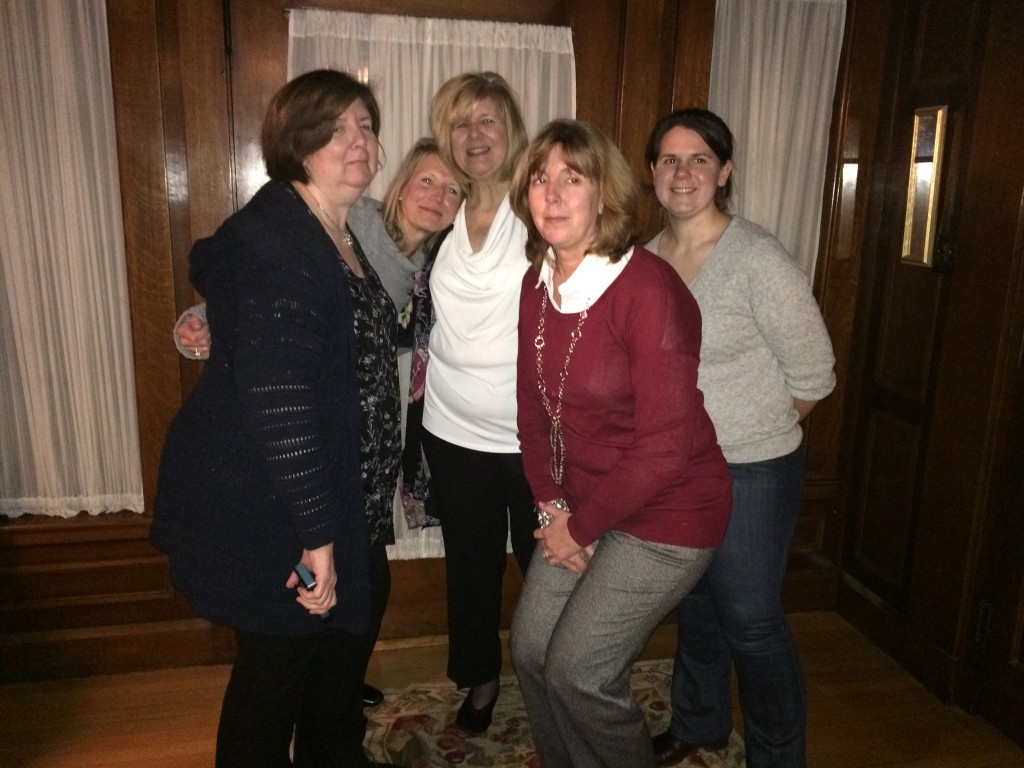 The Captain stepped in to play random girl.

I am so glad that I decided to sacrifice sleep and travel on the busiest travel days of the year to attend the celebration. Keary drove me to the airport at 4:30 am on Sunday for a 5:40 am flight back to Baltimore. My seatmates were two wearied eyed brothers returning to Johns Hopkins University to finish the semester. The three of us slept blissfully through the entire flight. When I awakened I watched the magic of the sunrise. 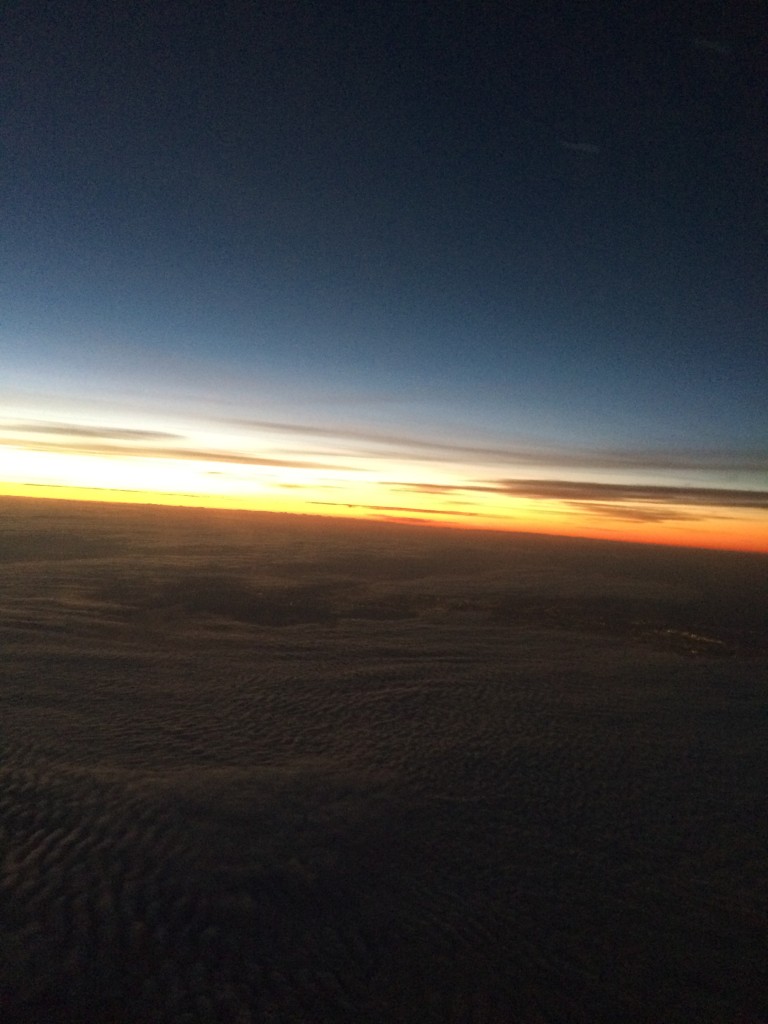 Upon return to my home by 7:45 am I slept for two hours…my youthful appearance as noted in all the photos may come naturally, but it does require sleep.