I was born into a family with two loving parents…and through their good faith as practicing Catholics they practiced quite frequently and I had three sisters and three brothers who came before me. Those sisters and brothers gave me wonderful “in and out” laws as well as many nieces and nephews and now many great nieces and great nephews.

The Thanksgiving holiday always found my mother up quite early putting the turkey in the oven to beat the neighbors to the gas as the pressure would drop in our little corner of Jamaica Plain. Sorry neighbors, she was ever the early bird, pun intended and no offense to the turkeys.

Sometimes my brothers managed to scoot out of the house early in the morning to attend the BC High and Catholic Memorial Football game, thus avoiding some of the tasks required for meal prep, etc.

The table was set the evening before with her best china, crystal glassware and silver ware. Every serving dish she owned was pulled out to be filled to the brim with potatoes, turnip, peas, squash, sweet potatoes, carrots, parsnips, cranberry, gravy, stuffing and what we deemed as appetizers, celery stuffed with cream cheese. 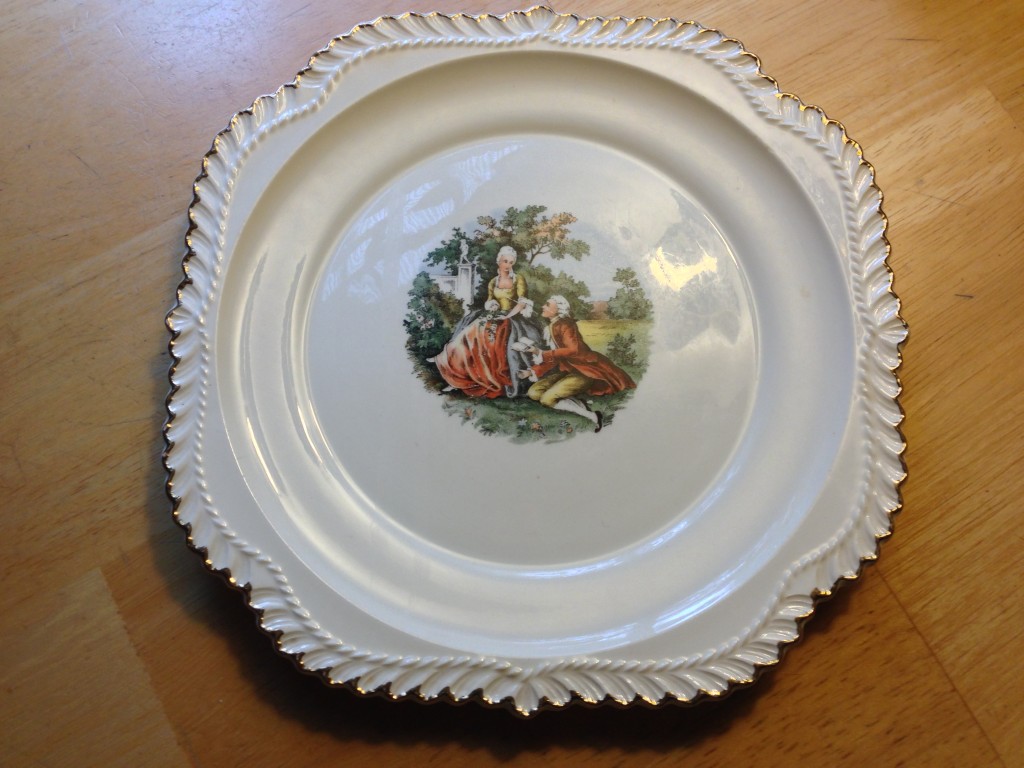 My mother’s china was from the Hasker Company…it was a give away for attending the movies…I think this occurred sometime late in the Great Depression. My sister , Keary has this china now. 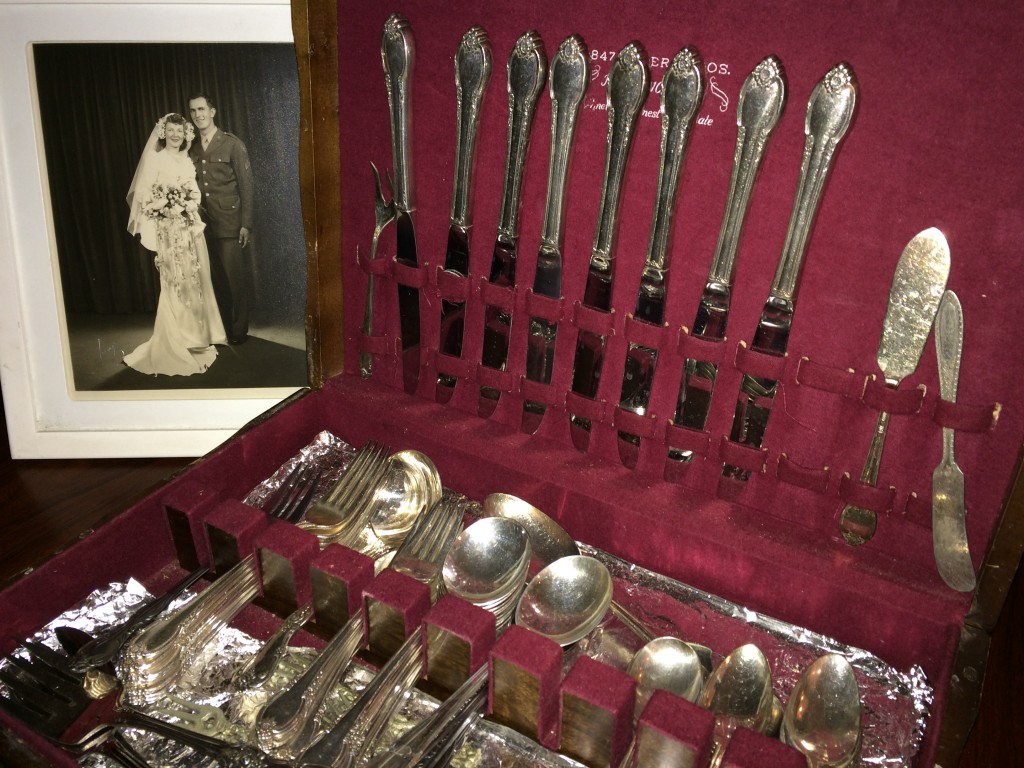 I was truly honored when my sisters and brothers elected to give me the silverware my parents received as a wedding gift from Uncle F. and Auntie E…..the original case… My mother placed the aluminum foil in the case because she read in Heloise Hints that if you keep foil in the case you won’t have to polish…after five years so far so good….Thanks Heloise! 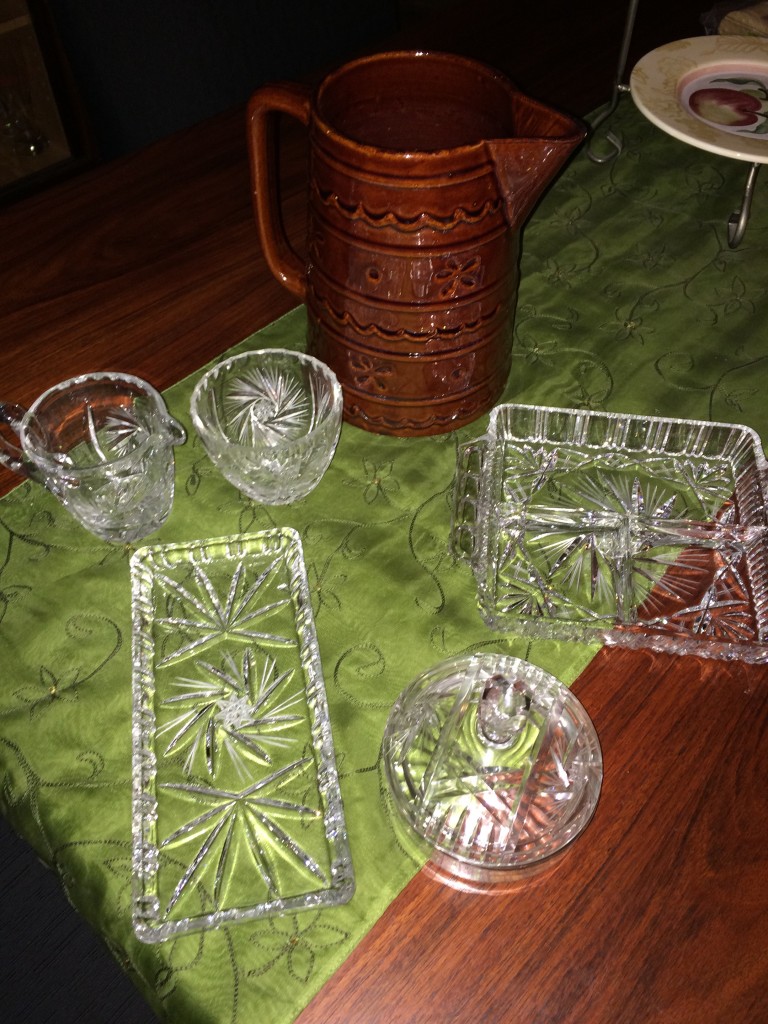 Milk went in the pitcher and various olives, pickles, & apricots or nuts were served in the crystal dishes. These are very special items to me because I know I hand washed every single one these and each is still pristine.

Naturally there was always extended family guests. My grandfather and his third wife, Clarice* always made the trip from New Bedford causing Keary and me to be removed from our double bed so that they had a place to sleep. One Thanksgiving when I was very young I asked my mother why we didn’t call Clarice “grandma”… my mother did not respond with a verbal answer rather the look she gave said, “Children should be seen and not heard.” I learned the story later in life and I won’t burden you with it now.

We ate in the late afternoon and had dessert in the early evening…there was no dishwasher unless you include the seven children and of course, cut out the three boys who were bonding with the Milkman (our father) and our grandfather watching football until Grandpa and Clarice declared it time to sing or play cards (for money). That’s right Grandpa and Clarice would instruct us to get our piggy banks and they taught us various poker games all while their high ball glasses never ran dry. If one of us started to win Clarice would complain to my mother that “the winner” was being rude or had committed some other act that required removal from the game. Apparently, I was rude at several Thanksgiving poker games…

C’est la vi, “rudeness” and  knowing “when to hold ’em and when to fold ’em” provided a nice nest egg for my college fund.

I look back on those Thanksgivings with fondness, even though my brothers have smoother hands than the four girls…don’t worry you can make it up to me with a gift certificate to a nail salon.

The Hubster and I will join his parents along with Son-ster #1 and his girlfriend, Bertie. Son-ster #2 is low man in the work force at his company in Pittsburgh so he works the day before and the day after, but he has a nice family to spend the holiday with and for that I am grateful to them. We will talk and send him photos and in the years to come we will spend the day together again. We have our health, our home and jobs (even though my job gets in the way of writing some weeks).

I am writing this on Thanksgiving eve…the 5k is early in the morning… I will take some photos and share early next week.

Thanks to all 14 of my regular readers as well as those that check in now and then.

Happy Thanksgiving to you and yours!