According to the dictionary a weekend is: the period from Friday evening through Sunday evening, especially regarded as a time for leisure. (Somebody needs to train my brain to think this during the school year as I find myself busily completing school work most weekends.) Although this past weekend I made a concerted effort to put school work aside on Saturday. The Hubster was able to score some “what I did for love” points with me, his child bride and reason for being, as his leisure was spent accompanying me to an exhibit where he was one of a few dozen men shuffling among a sea of enthusiastic women ages 35 plus.

Modeling my favorite line as uttered by Maggie Smith’s character from Downton Abbey. 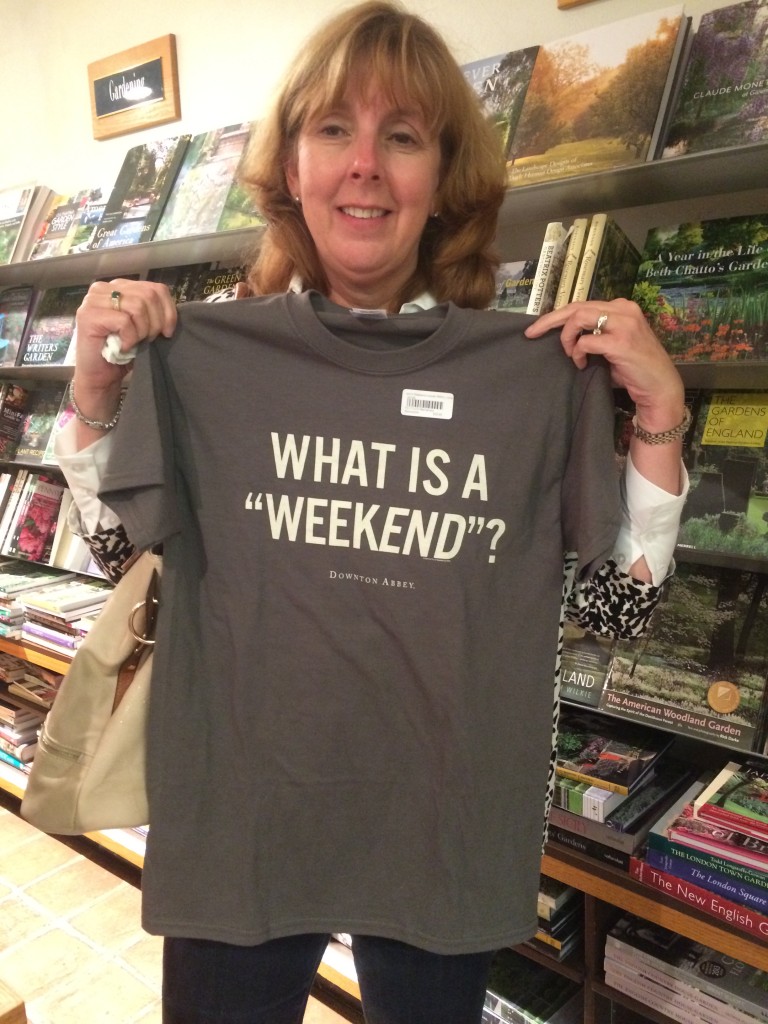 Not quite sure I should have chosen grey to model…

I heard that the costumes of Downton Abbey were making an appearance at Winterthur; a museum, garden and library, once the home of the du Pont Family near Wilmington, Delaware for several months beginning last March.

I suggested we take a visit. It has only taken seven months of prodding to get the Hubster on board. Hubster does enjoy the show or at least he pretends to like it for me. Unfortunately, I cannot pretend to like one of his favorites; The Walking Dead, which coincidentally starts its new season this very same weekend. I am sorry, I have just never been a zombie apocalypse kind of girl. Perhaps this dislike  goes back to my sophomore year in high school English Literature class. One of the few lay teachers, a male, taught Art of American Film to seniors. We were sophomores and apparently he didn’t much feel like teaching according to our lesson plan that day so he marched all of us up to an older chemistry lab far away from  the main office and out of earshot of the good Sisters who ruled the school. There he rolled in the AV cart and had us view Night of the Living Dead, the 1968, black and white  version. We were scared senseless in two ways. First,  we thought he was breaking the rules and somehow we would be blamed and second, it was scary.

I didn’t take this photo as it was a gloomy day and I wasn’t going to drag the Hubster around the grounds so I could snap a decent photo of the home. Not mention my hair was becoming a frizzy disaster.

We did experience a very detailed tour of the du Pont family home with its many antiques, unique wall papers, exquisite china and just general “posh-ness” of American “royalty”. Unlike most museums of its type we were permitted to take photos inside. Most of my photos are on the dark-ish side…next time I’ll use the flash since it was permissible.

Our first stop was an elevator ride to the fifth floor of the home where we exited the elevator to enter a long hall which served as a former butler’s pantry for the dining room.

Flowers were chosen first, then the china, cutlery and glassware was chosen to complement the floral arrangement at each meal. The portrait on the wall is an original of George Washington.

Funny, I have three sets of dishware to choose from…everyday blue and white Dansk, a white china pattern with gold rim ala Lenox and a Christmas pattern purchased on “super deep, they practically paid me to take it off their hands in February” discount pattern. I choose flowers to match what I already have at home. Lifestyles of the middle-class and less famous.

The silver beer steins on the buffet were made by Paul Revere, Victoria was our guide.

A replica of the buffet was available for sale in the gift shop. At $37,000.00, Hubster stated unless this includes free shipping ours would have to do. Who needs mahogany inlaid furniture made by the finest craftsman of Philadelphia, anyway.

H.F. du Pont was a Harvard educated man who was well-known in the world of horticulture and preservation. I suspect chemically inclined as well since the nearby du Pont plant features his family name.

The family definitely had a true understanding of a weekend for throughout the home there were many rooms for leisure.

One of the many tea/sitting/dessert-eating/conversing rooms in the home.

Not a great photo of Hubster and me gazing into a mirror, but it seems this mirror has  reflected many famous and noteworthy Americans. 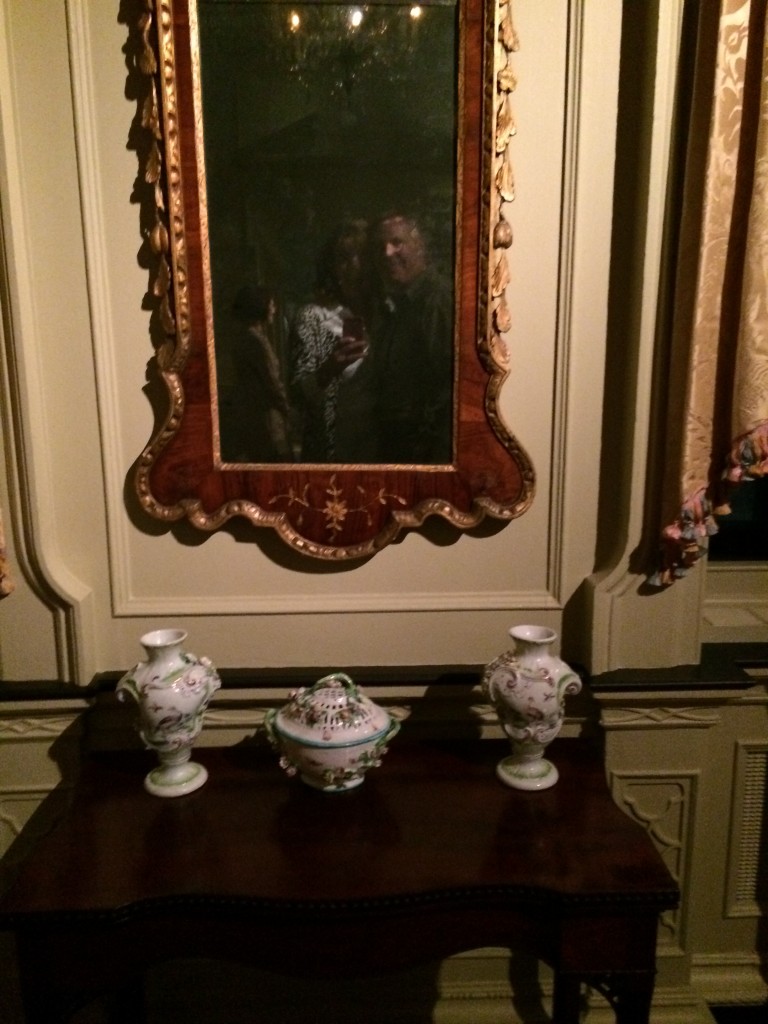 I also tried to convince the Hubster that we looked a bit zombie-like. This piqued his interest, calmed the heavy sighs and put more pep into his shuffling step.

We passed through several hallways with many staircases. 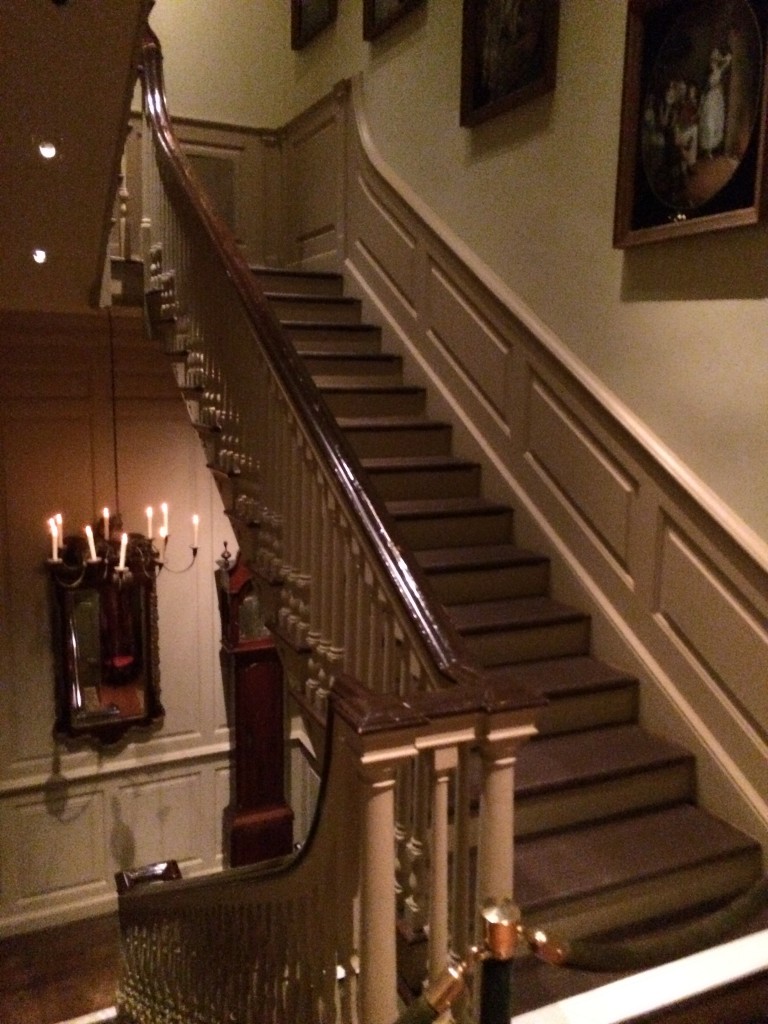 Someone did inquire as to how many staircases were in the home, but I did not listen to the answer. I saw three.

This was an entertainment parlor where bridge was played into the wee hours of the morning. A piano player entertained as we moved from room to room. The wallpaper was hand painted in China and the room was especially retro-fitted with cove ceiling in order to use the paper as designed from top to bottom. 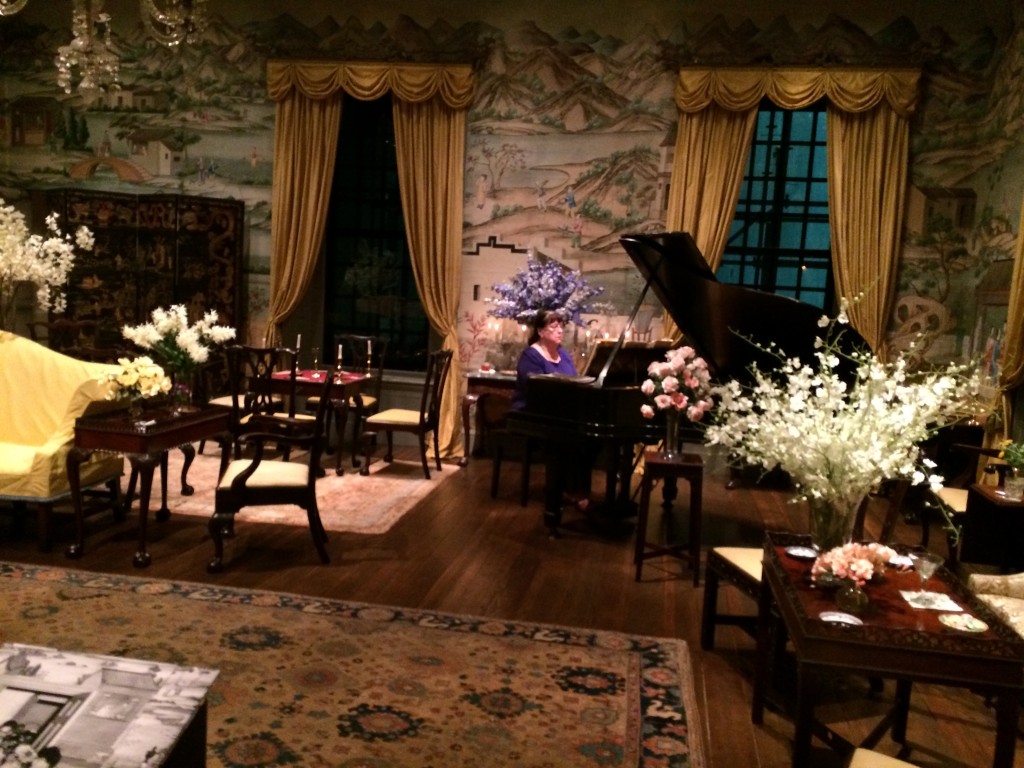 Victoria, our guide asked if we noticed anything special about the paper. I, of course called out my answer without raising my hand like any good teacher would and stated…”there is no repeating pattern.” I was correct, but her glare told me she did not appreciate the calling out. I suspect she was taught by nuns or she was a former teacher, as I too would have given the disapproving glance. 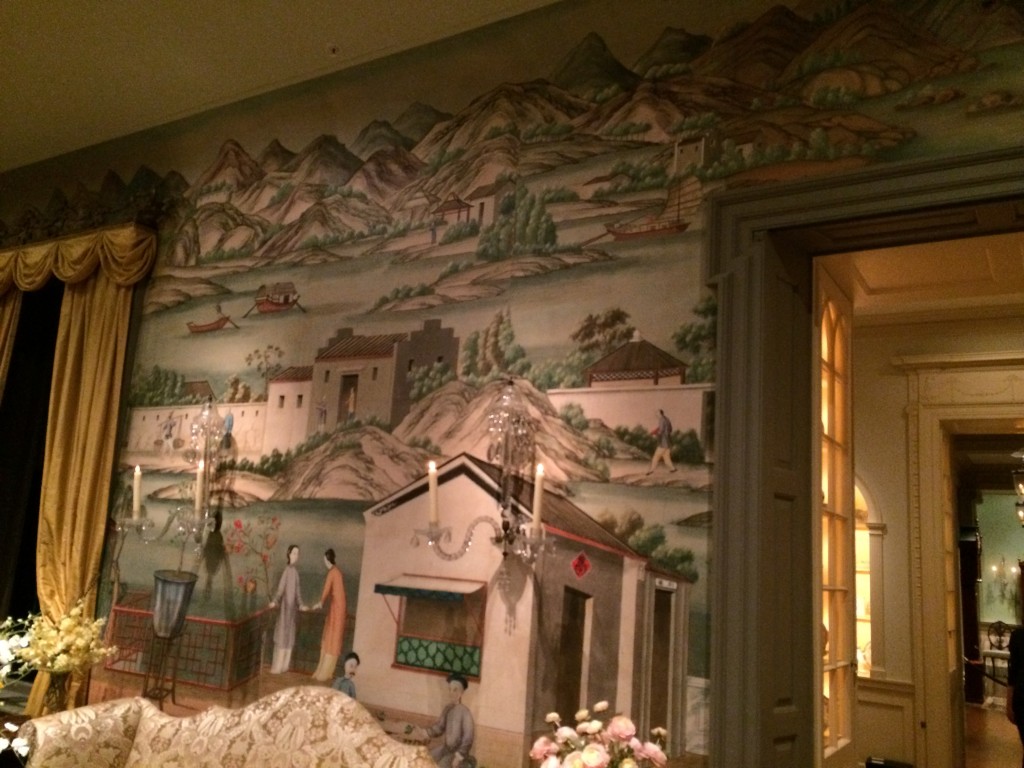 While historically magnificent, I do not adore wallpaper. My mother wall-papered many rooms in our old Victorian home . It was a stressful time removing the old and applying the new. 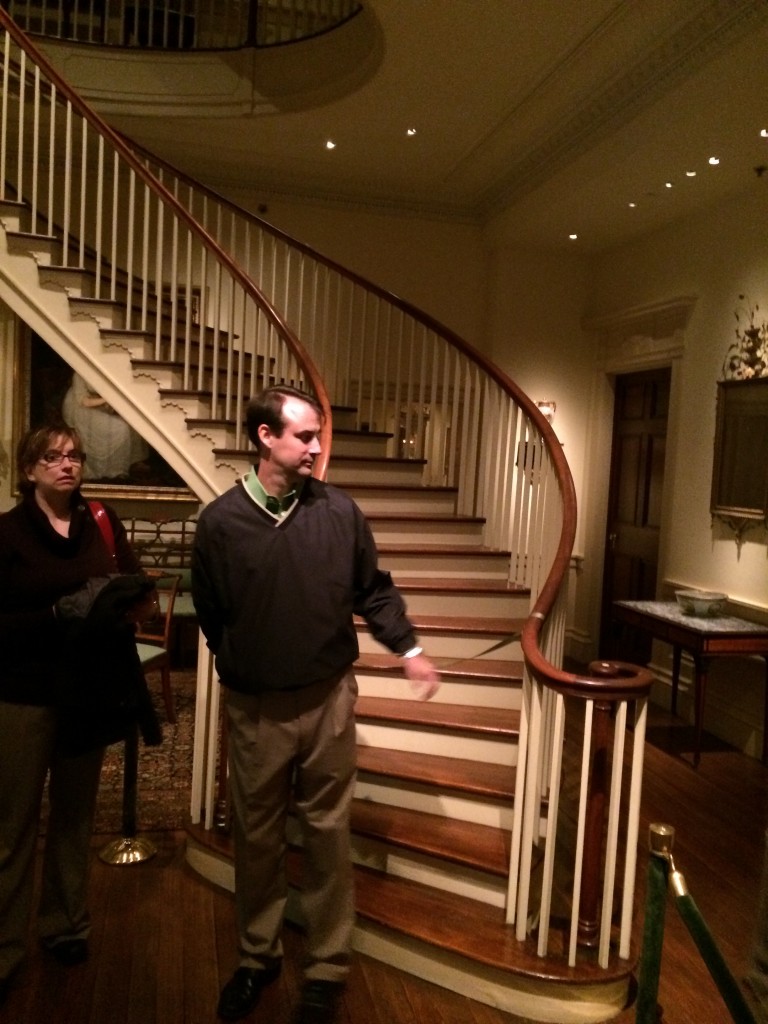 The du Pont brides threw their bouquets from this staircase. Disregard another of the men on our tour.

Three more parlor type sitting rooms…some large, some small. All with valuable antiques and collectibles worth more than our net worth. 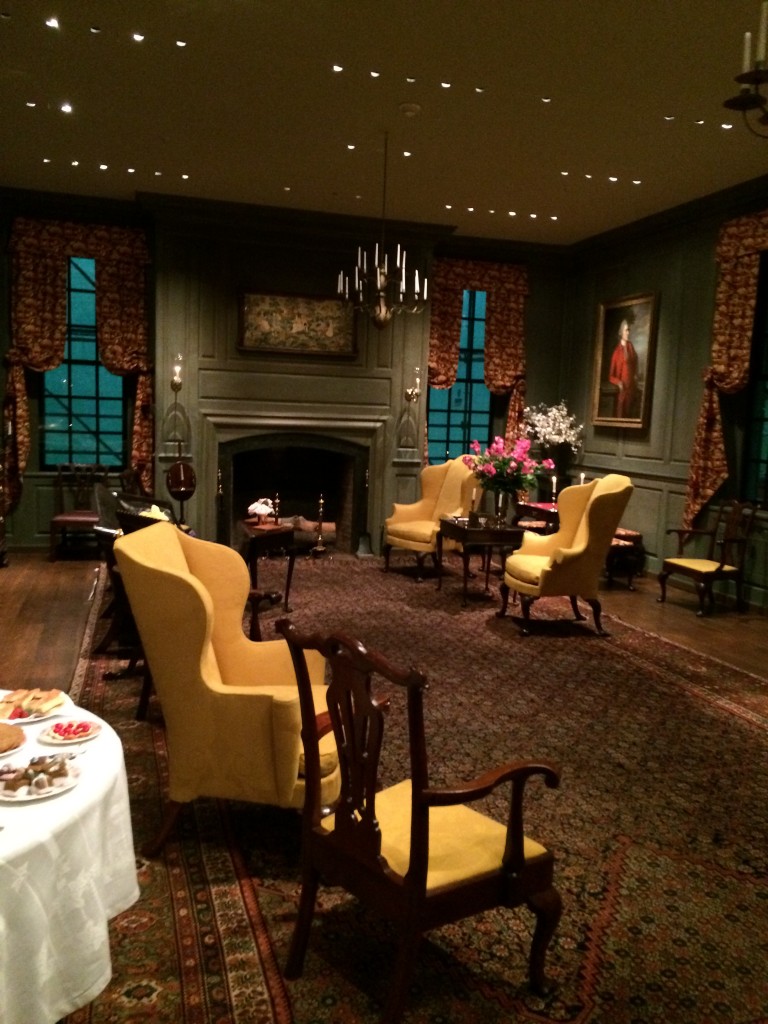 Many of the rooms had the crystal lighting, whether sconces, chandeliers or lamps.

There are several other galleries to view at the museum. 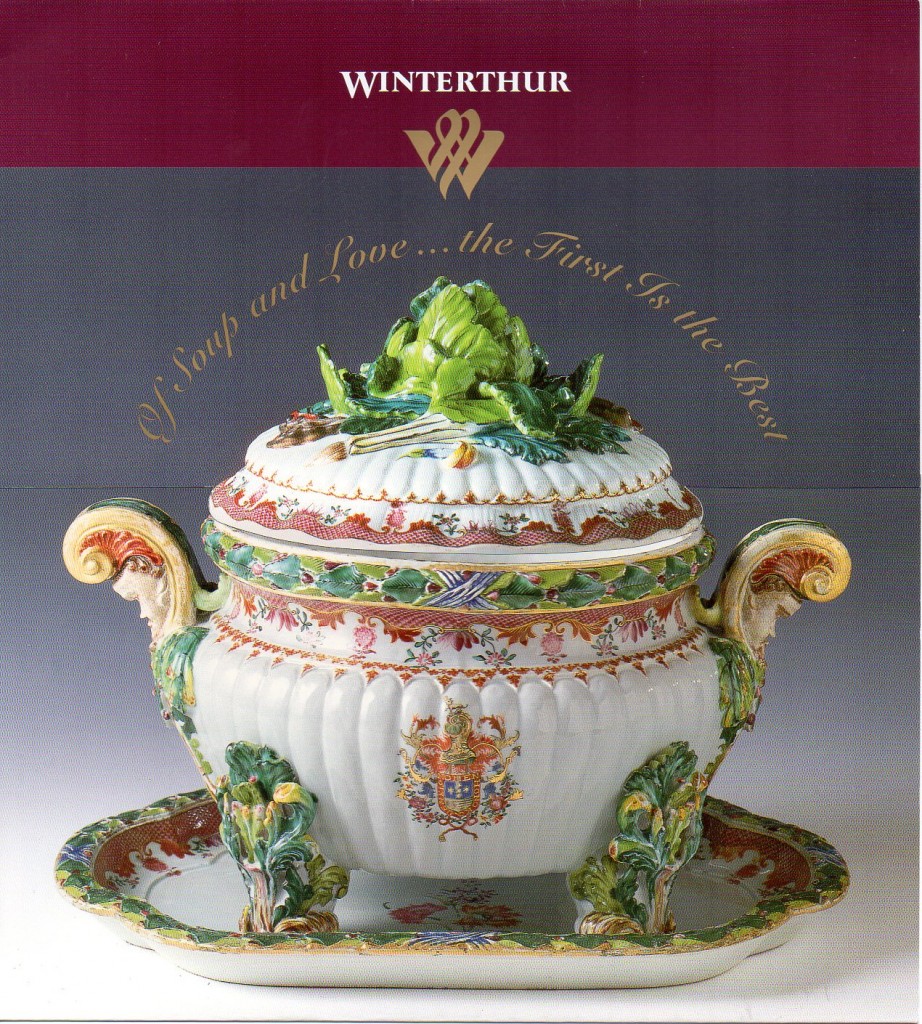 While lovely to view it did not capture our attention for too long. I snapped this photo of one of the tureens as I have many friends who enjoy a good rooster.

The three gift shops on site are lovely and featured items that are unique and as mentioned previously a bit pricey. I did acquire a sweet pair of sparkly earrings, even though I tend to wear the same pair all the time. I do believe I am worth it. Also, I may have to take one for the team and watch the Walking Dead. 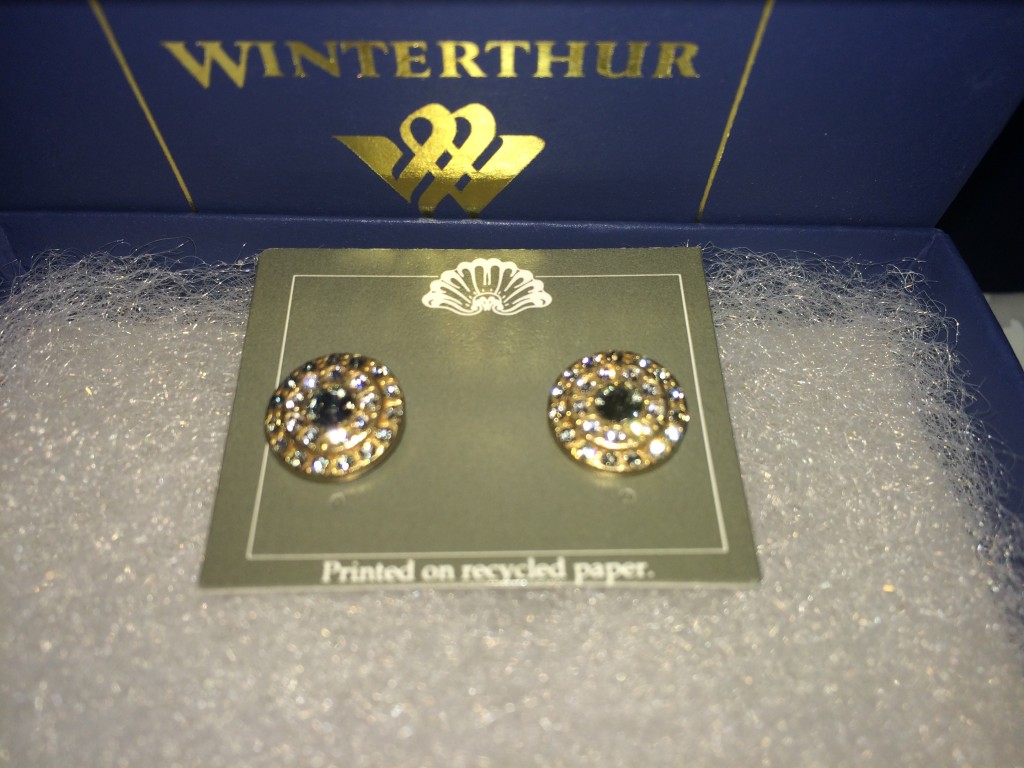 Much “sparkly-er” in living color.

There was also a small collection of men’s ties…perhaps to get the attention of the men who had been herded into the shop. I wanted the Hubster to choose this tie as this little sheep was the standout among the others. No reference to him being a “Black sheep” of the family is implied. 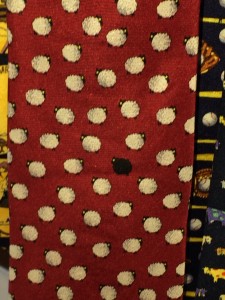 We could have taken a tram or walking tour of the gardens, but I’ll save that for another brighter day. The other galleries of the museum featured antiques most were made by American craftsman, but some from European and Asian countries. There was also a needlework gallery and tin gallery. 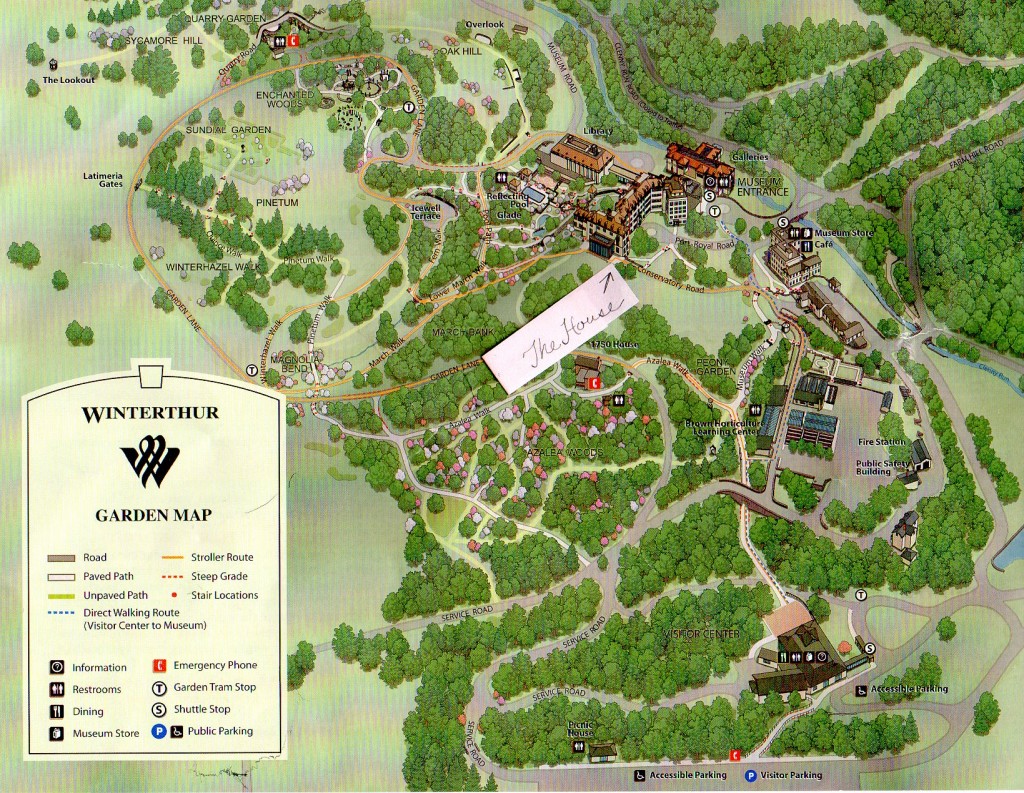 Our day was not complete because we enjoyed a lunch at the visitor center which the Hubster and I appropriately entitled “Downstairs Dining at Upstairs Pricing” in honor of the whole reason we visited the museum: our time stamped tour between 3-5 pm of the Costumes of Downton Abbey. The food was typical museum food which left us underwhelmed. We overheard a few Red Hat ladies eating nearby who stated they would have been better off having lunch at the nearby Brandywine Inn.

The Costumes of Downton Abbey will be featured in a post later in the week…one can’t be too careful when it comes to revealing too much at one time. 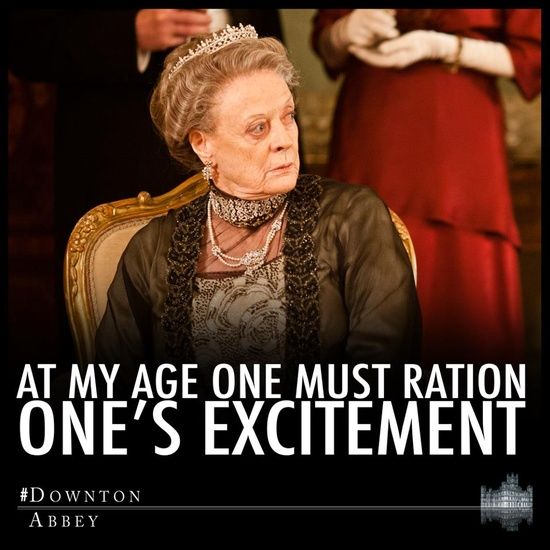 See you later in the week.